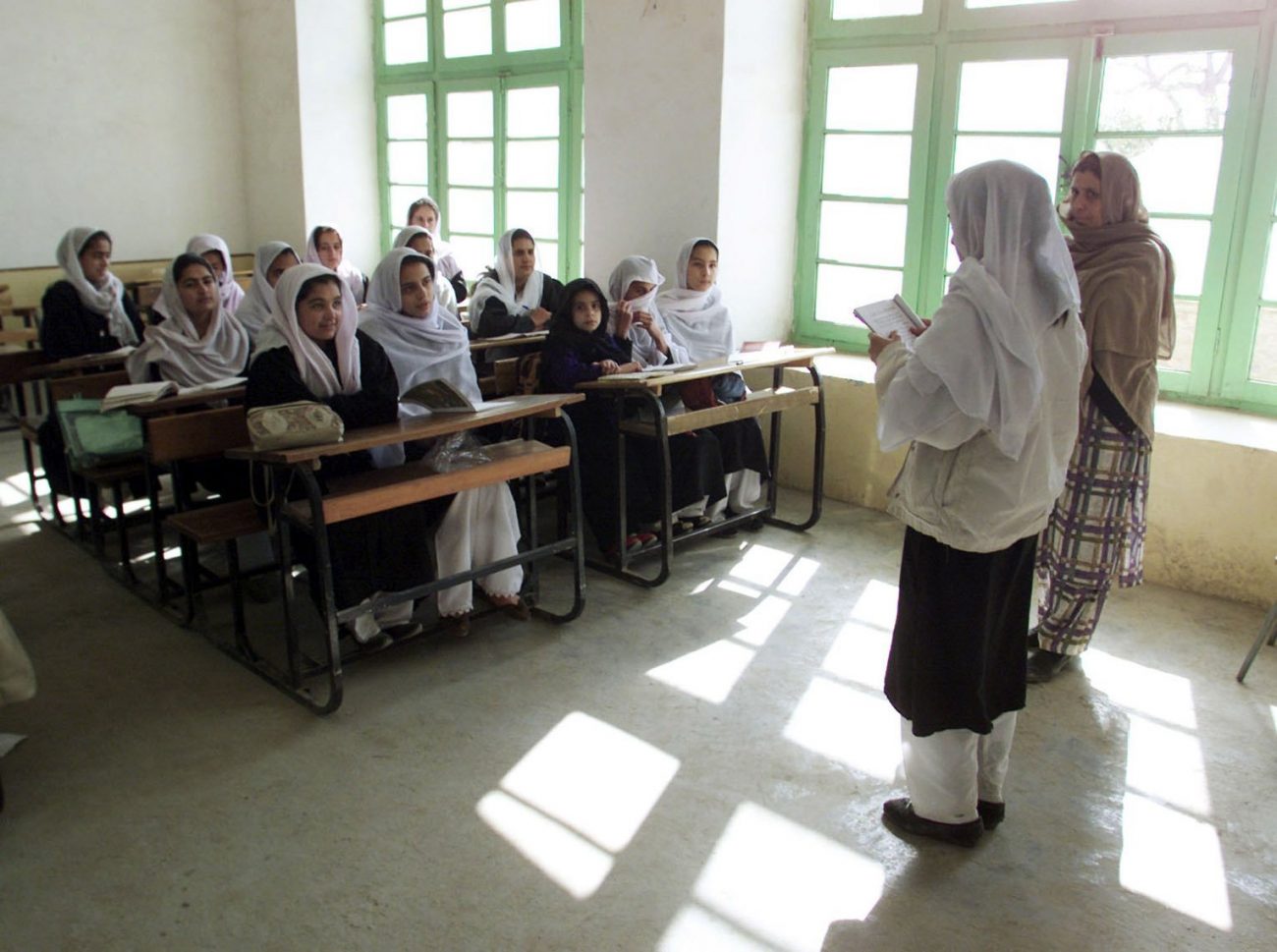 Young women attend class at a school in Kandahar, Afghanistan, Jan. 15, 2002. Religious minorities and women are concerned about their treatment at the hands of the Taliban and other religious extremists. (CNS photo/Zainal Abd Halim, Reuters)

AMMAN, Jordan (CNS) — The 20-year American military presence in Afghanistan had hoped to bring stability and an end to its use as a terrorist sanctuary, but the tumultuous exit has laid open fears for the future, particularly for religious minorities and women, at the hands of the Taliban and other religious extremists.

“The situation in Afghanistan is terrible for the minorities, because the Taliban want to impose a fusion of their local Pashtun traditions with their fundamentalist vision of Islamic Shariah law, not just on the country’s diverse ethnic groups, like Hazari Shiites, but also on women and children across the entire country,” Francesco Zannini, professor emeritus at Rome’s Pontifical Institute for Arabic and Islamic Studies, told Catholic News Service.

“These minorities are already discriminated against from the beginning. The Taliban want them to come under their religious interpretation,” said the Italian expert on Islam in Asia.

“But some of the groups can defend themselves due to the mountains which separate them, creating a sort of barrier. They have their own traditions, which don’t cope with those of the Taliban,” Zannini said. “The Taliban will always be in conflict with the minorities. There will be a continuous war between the Taliban Pashtun state and the other minority groups, which will continue to defend themselves.”

Besides, “there are Afghans who have developed a kind of Western understanding of democracy, found mainly in Kabul and some towns,” Zannini said of those, especially women, who have pursued educational and career opportunities available in the past 20 years, which had been forbidden during the Taliban’s austere Sunni Muslim rule, imposed on the population from 1996 to 2001.

“There will be a long period of instability,” Zannini predicted. “The maximum they can achieve will be a confederation of various ethnic groups and tribes. But this is not what the Taliban want.”

Recently, a Taliban spokesman vowed to respect people’s rights and allow women to work within the framework of Islamic law, but what that means in practice is still not clear. Meanwhile, there have been reports of men and boys killed in villages and girls as young as 12 taken as so-called “brides,” whom the Taliban consider spoils of war.

The Taliban adhere to Deobandi Islam, which is traced back to 19th-century colonial India under the two radical Muslim clerics, Maulana Muhammad Qasim Nanautawi and Maulana Rashid Muhammad Gangohi. They sought to indoctrinate Muslim youth with an austere and rigid form of Islam that evolved into militancy against non-Muslims as well as fighting secularism and colonialism.

Deobandi Islam upholds the Hanafi school of Sunni Muslim Shariah and works for the establishment of the Islamic caliphate as the way to salvation. Islamic practices dating back to the seventh century under the Prophet Muhammad are enshrined. It also believes that a global holy war is the duty to protect Muslims worldwide.

During the Soviet invasion of Afghanistan in 1979, funding to Deobandi religious schools or madrassas came from Saudi Arabia and the United States. The Saudis pushed their own fundamentalist interpretation of Islam — Wahhabism — within these schools, according to Thomas Hegghammer, a Norwegian expert on Afghanistan. Observers say Pakistan supported Deobandi militancy to fight the Soviet Union in Afghanistan and India in Kashmir. Pakistan has provided refuge to Taliban militants at various times.

The Islamic State’s affiliate in Afghanistan, known as Islamic State Khorasan, is an avowed enemy of the Taliban, whose members they consider as “too liberal,” “apostates” who abandoned holy war for a peace settlement with the U.S.

Islamic State Khorasan, which claimed responsibility for the deadly attacks Aug. 26 at the Kabul airport, sprang up in the eastern Afghan province of Khorasan after the so-called Islamic State militants invaded Iraq and Syria in 2014-15. They later began attacks on U.S. forces in Afghanistan. But the extremists have also targeted Afghan authorities, the Taliban, religious minorities, including Shiite Muslims and Sikhs, and aid organizations. The United Nations estimates there are 1,500-2,200 such fighters, with cells in Kabul. 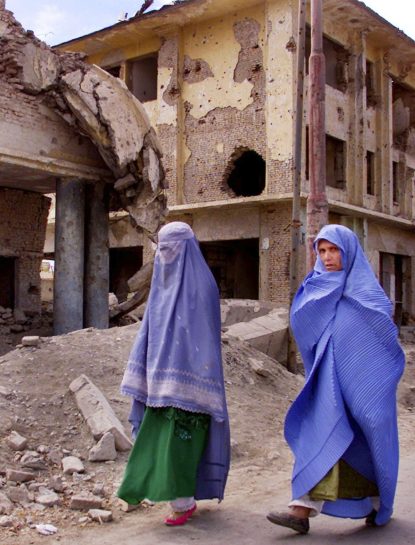 Afghan women walk in a war-destroyed street in the Afghan capital of Kabul Dec. 5, 2001. Religious minorities and women are concerned about their treatment at the hands of the Taliban and other religious extremists. (CNS photo/Peter Andrews, Reuters)

Islamic State Khorasan wants to establish an Islamic caliphate in Central and South Asia. It has murdered pregnant Afghan women about to give birth in a maternity ward and attacked a Kabul girls’ school in spring, killing at least 68 people.

Observers say the Taliban will need Western aid and finance, inducing its political brass to present a less extreme image to the world, but concerns remain over actions taken by its military leaders or untrained Taliban youth toward religious minorities, women, and girls. A new humanitarian crisis in Afghanistan is also brewing, with up to half a million expected to flee by the year’s end, the U.N. warns.

“Vulnerable groups include not just women and girls, but men of all ages. There will be a portrayal to the West of sort of a ‘benign’ Taliban as a government in Afghanistan,” said Merwyn De Mello, who worked in peace building and humanitarian assistance in Afghanistan for three years.

“The Taliban’s not homogenous. Some even brought their girls to underground schools in Afghanistan,” he told CNS.

But he said the Hazara Shiite community was particularly susceptible to attacks in Kabul and even in the central highlands.

“That minority is definitely always going to be oppressed. They will be impacted depending on how the international community engages with the Taliban,” the Catholic aid worker said.

“The more the adversarial relationship with the West, the more the targeting of the Hazara community — they will be the example. However, key will be local relations with the Taliban,” he added.

De Mello warned it’s also believed that “Western powers are going to engage with local armed groups to develop a resistance to the Taliban. So, the most vulnerable groups will be impacted as a result.”

Meanwhile, the Washington, D.C.-based Religious Freedom Institute said in a recent commentary that “widespread Christian persecution in Afghanistan under the Taliban of the 1990s never stopped.” And Nina Shea, director of the Hudson Institute’s Center for Religious Freedom, told Blaze TV, “I’m not exaggerating by saying that the Taliban are killing Christians.”

The International Religious Freedom Roundtable, also in Washington, urged the Biden administration and world leaders “to act immediately to protect the lives of the most vulnerable — religious minorities who are despised by the Taliban because of their beliefs,” pointing to the “threat of systematic arrests, torture, enslavement, and public executions” by the Taliban of “Hazara Shiites, Sikhs and Hindus, along with thousands of Christian converts (particularly despised as infidels).”

“Many are displaced, cowering in fear, or seeking ways to escape. Official ‘threat letters’ have been sent by the Taliban to religious minorities warning of harsh actions to come,” said Lauren Homer, an Anglican international lawyer on religious freedom issues who chairs the roundtable’s Middle East Working Group.

PREVIOUS: Pope advances sainthood cause of mother of three