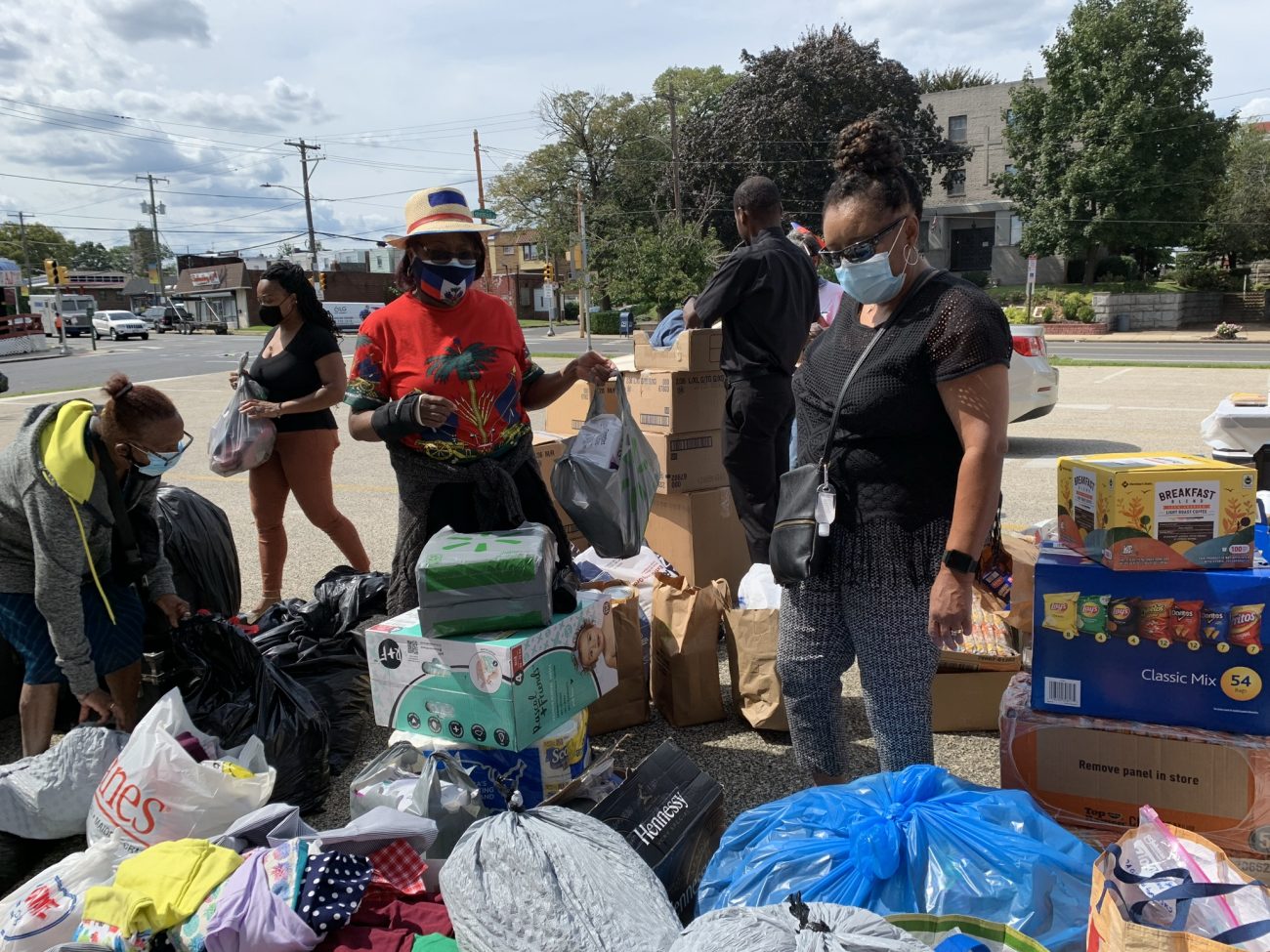 Vida Moise (in red), a lay leader for the archdiocesan Haitian Catholic Community, organizes relief supplies donated Sept. 11 as part of a month-long archdiocesan campaign to assist survivors of an Aug. 14 earthquake in Haiti. (Gina Christian)

On Sept. 11, the archdiocesan Haitian Apostolate kicked off a month-long donation drive at two Philadelphia parishes, St. William and St. Barbara, both home to the area’s 3,000 some Haitian Catholic community members.

Also coordinating the initiative are the archdiocesan Office for Pastoral Care for Migrants and Refugees and Catholic Social Services (CSS), with the latter agency covering ocean shipping costs for the donations.

CSS will also supply diapers and feminine hygiene products, while the agency’s Casa del Carmen Family Service Center, based in North Philadelphia, will contribute more than 100 pairs of flip flops.

Upon arrival in Haiti, the donations will be received and distributed by the Missionary Oblates of Mary Immaculate (OMI), an order serving hard-hit southwest Haiti and the congregation of Haitian Apostolate chaplain Father Eugène Almonor, in residence at St. William. 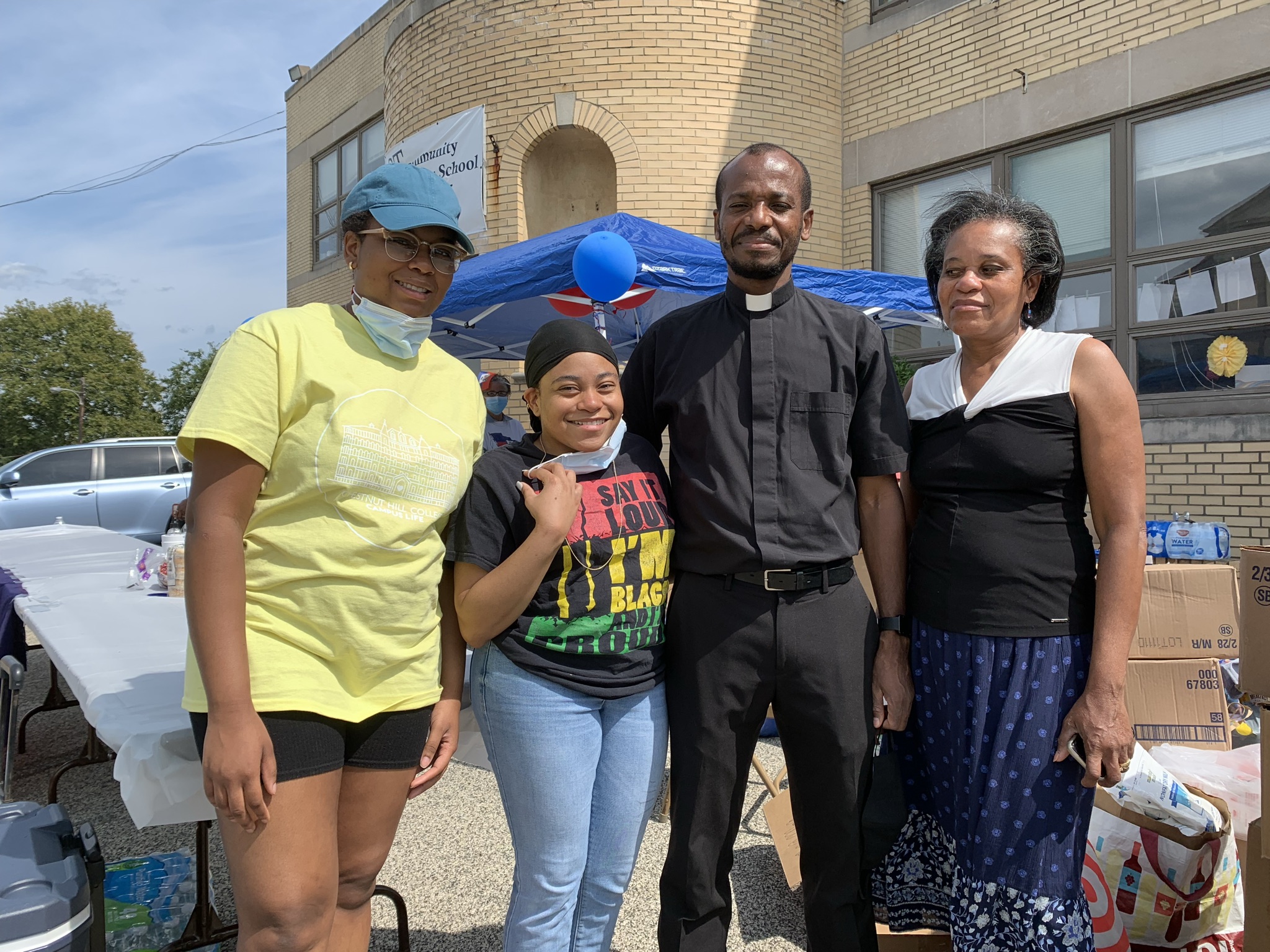 A native of Haiti, Father Almonor said the Oblates “lost all, including school buildings, churches (and) rectories” at their Les Cayes campus in the magnitude 7.2 quake Aug. 14 that killed more than 2,200 and injured at least 12,000.

According to Voice of America, 18 people attending a baptism were killed in Immaculate Conception Parish church of Les Anglais.

The OMI-run elementary and high schools at which Father Almonor studied were “destroyed,” as were nearby churches, which urgently need “vestments, chalices, ciboriums, monstrances – everything,” he said.

In early July, Haitian president Jovenel Moïse was ambushed and shot dead in his home; his wife Martine, survived her injuries in the attack. A former justice ministry official is now suspected of having ordered the assassination.

During an Aug. 20 prayer service for Haiti, Father Almonor said that “Haiti is down, but it can be raised up, as Jesus was after he died.”

The archdiocesan donation drive has only affirmed that belief, he said.

“This can be summarized by one word: love,” said Father Almonor. “It’s the love, the solidarity of everyone to help suffering people. So for me, it’s wonderful to see.”

Donated items for the archdiocesan Haitian relief effort will be accepted at St. William Parish until Oct. 24. To arrange a drop-off, contact the rectory at (215) 745-1389.

Check donations are also welcome and may be mailed to Sr. Gertrude Borres at the Office for the Pastoral Care of Migrants and Refugees, 222 N. 17th Street, Philadelphia, PA 19103. Checks should be made payable to “The Archdiocese of Philadelphia/PCMR.” For additional information, contact Sr. Gertrude at (215) 587-3540.

PREVIOUS: AbbeyFest ready to put on a show for thousands