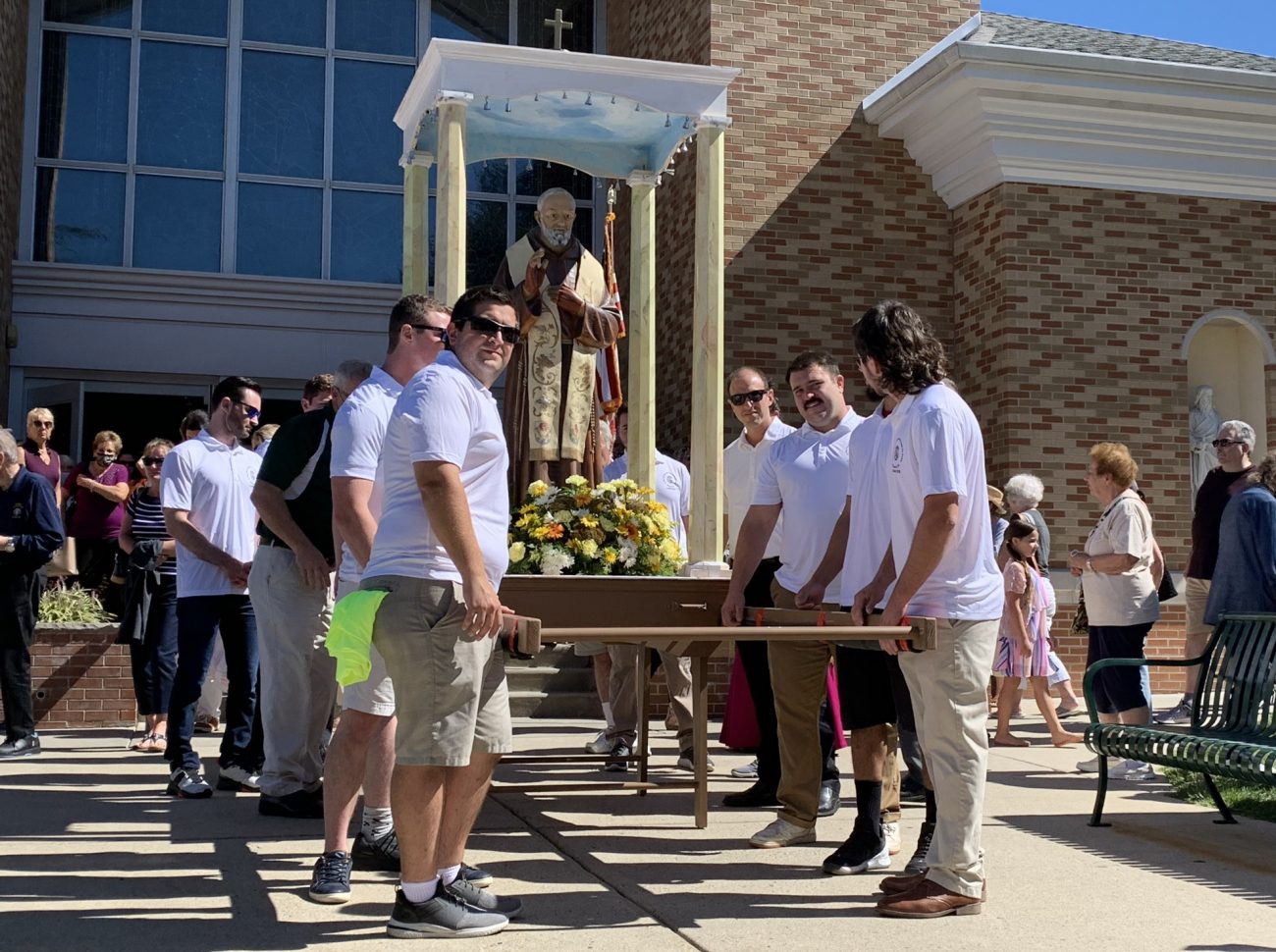 Young adults at St. Bede Parish in Holland prepare to carry a statue of St. Pio of Pietrelcina during a Sept. 19 neighborhood procession, part of a two-day festival the parish and its Knights of Columbus chapter hosted for the sixth year in honor of the popular and beloved saint. (Gina Christian)

A Bucks County parish recently honored a beloved Italian saint with a lavish two-day festival that brought “many, many blessings” to hundreds of participants.

St. Bede the Venerable Parish in Holland and the Knights of Columbus Council 15478 hosted the sixth annual Padre Pio Festival Sept. 18 and 19, drawing archdiocesan faithful as well as attendees from New York, New Jersey and Delaware.

“We had a whole pew of people from Staten Island,” said Msgr. John Marine, pastor of St. Bede and the festival’s creator. “We ran out of holy cards at one point.”

The weekend gathering — which celebrated devotion to St. Pio of Pietrelcina, a 20th-century Capuchin priest from southwest Italy known for his holiness and miraculous intercession — featured an array of activities for soul and body. Masses, confession, Eucharistic adoration, a healing service, spiritual talks and relic venerations were rounded out by live entertainment, games, raffles, kids’ activities, vendors and plenty of Italian desserts.

Born Francesco Forgione in 1887, the future Padre (“Father”) Pio entered the Capuchin order at age 15 and was ordained in 1910. Eight years later, he received the Stigmata, the first such priest to do so in the history of the Catholic Church. Amid a lifetime of physical and spiritual suffering – compounded by austerity and long hours of prayer — he established Casa Sollievo della Sofferenza, now a renowned national research hospital located in the southern Italian town of San Giovanni Rotondo. Padre Pio died in 1968 and was canonized in 2002 by then Pope (and now St.) John Paul II. 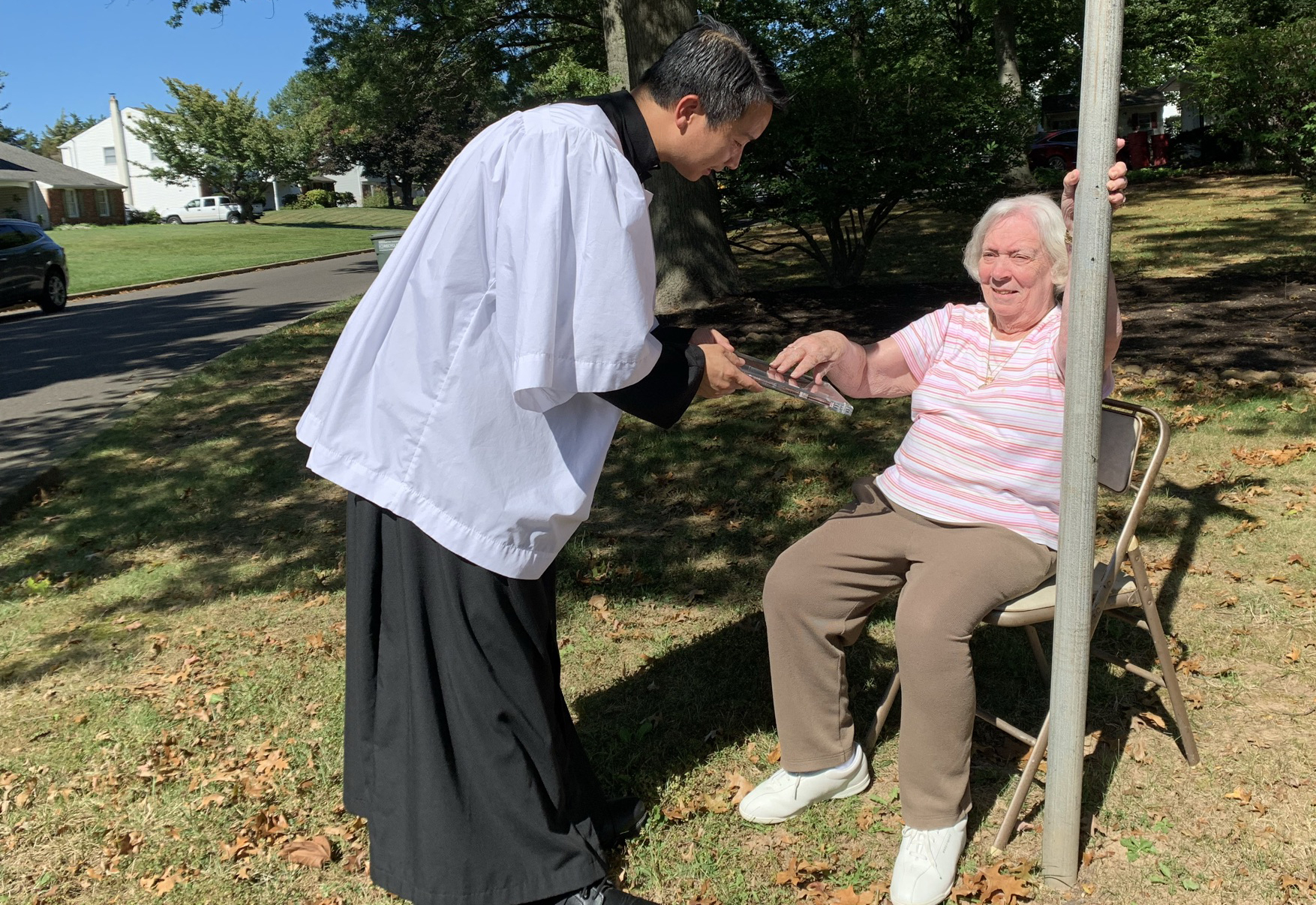 A woman venerates a relic of Padre Pio (St. Pio of Pietrelcina) held by transitional Deacon Ryan Nguyen during a Sept. 19 outdoor procession through the neighborhood surrounding St. Bede the Venerable Parish in Holland, part of an annual two-day festival the parish hosts in honor of the beloved saint. (Gina Christian)

Following Sunday’s Mass, a large statue of St. Pio was processed for about a mile through the residential neighborhood surrounding St. Bede. Seminarians from St. Charles Borromeo Seminary in Wynnewood led participants in a recitation of the rosary, while the Verdi Band of Norristown, an Italian-American horn and drum ensemble, provided accompaniment.

The statue itself was a testament to the saint’s Italian heritage, said liturgical artist and St. Bede parishioner Ed Rogowski, who painted and modified the Florence-made image. To emphasize the saint’s noted skills as a confessor, Rogowski added a clay stole to the statue, shaping its threads with a kitchen gadget for cutting pasta dough.

“It was just great, because it was almost like Padre Pio was telling me what to do,” he said.

Rogowski also credits the saint with “pulling (him) through” when he almost died of complications from a double knee replacement.

During the procession, transitional Deacon Ryan Nguyen carried a reliquary with a set of gloves Padre Pio wore to cover the hand wounds of his stigmata. A number of area residents venerated the relics from the sidelines, with some visibly moved by the encounter.

The experience was a confirmation of the future priest’s vocation, said Msgr. Marine.

“Deacon later told me, ‘You know, seeing what a simple touch of blessing did for the needs of the people, I can’t wait to be a priest,’” said the pastor, who personally invited parish youth and young adults to serve as statue bearers for the occasion.

Younger attendees enjoyed their own “Padre Pio Kids’ Pavilion,” in which St. Bede director of religious education Shawn Tobin and his wife Kathleen offered a short film about the saint, along with craft projects that emphasized Padre Pio’s vibrant relationship with guardian angels. 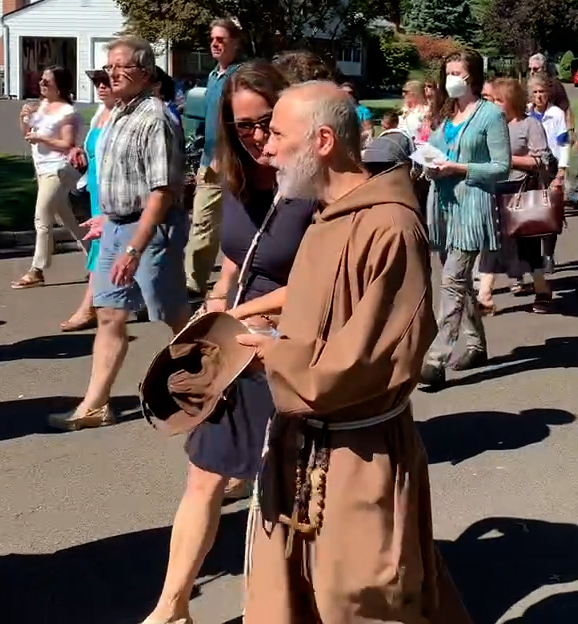 The multifaceted festival was a fitting tribute for a saint whose message is more relevant than ever, said Father Pio Mandato, the principal celebrant and homilist for Sunday’s liturgy.

A Franciscan priest now living as a missionary hermit in the Diocese of Scranton, Father Mandato was himself born in Pietrelcina, and his parents and grandparents were close with Padre Pio, for whom he was named – and from whom he received his first holy Communion, just prior to his family’s emigration to the United States. Ordained in 1985, Father Mandato celebrated his first Mass in Pietrelcina at the same altar where his famous family friend had offered his first Mass in 1910.

Padre Pio’s profound union with Christ’s passion enabled the saint to undergo “the transformation that can happen in suffering, if we let the Lord’s eyes into our souls,” said Father Mandato. “Let Jesus look into you … that will change everything.”

Such renewal is the only viable option when faced with what are ultimately life’s only choices, “chaos or Christ,” said Father Mandato, quoting 20th-century British novelist Evelyn Waugh, who shocked literary circles by converting to Catholicism in 1930.

While “secular, political and anthropological chaos” are “rampant” in “a culture that’s completely de-Christianized,” said Father Mandato, “Jesus’ gaze will set you free.”

St. Bede parishioner Theresa Agin, who managed one of the religious article tables, said Padre Pio was a saint “from the heart, a people person.”

“There’s something about him; I pray to him and I can feel his presence,” she said. “I pray to him for other people, and they feel something but can’t explain it. I say, ‘Ah, that’s just Padre Pio. You’ll be better.’”

Agin credited Msgr. Marine – who first learned about Padre Pio while a child at Holy Saviour Parish in Norristown — for enriching the parish with his deep devotion to the saint.

Padre Pio “didn’t just talk the talk; he walked the walk in so many different ways,” said Msgr. Marine, adding the saint would have been pleased to see how many festival attendees visited the confessional over the course of the weekend.

For Joseph Sellecchia, who won a garden statue of Padre Pio at the festival, the saint is like one of the family – and a source of consolation and hope.

“My father passed away in October, and he was here two years ago since Padre Pio was his favorite saint,” said Sellecchia, a member of Our Lady of Guadalupe Parish in Buckingham. “My aunt’s best friend’s family knew Padre Pio personally, and when my father was starting to fail, she blessed him with a cloth that has Padre Pio’s blood on it.”

Holding the statue close as he left the festival grounds, Sellecchia said winning the image “meant the world” to him.

Prior to his death, the saint said he planned to ask the Lord to allow him to stand at heaven’s gate – “with one hand reaching out to my spiritual brothers and sisters, that I might be able to carry them in,” quoted Msgr. Marine.