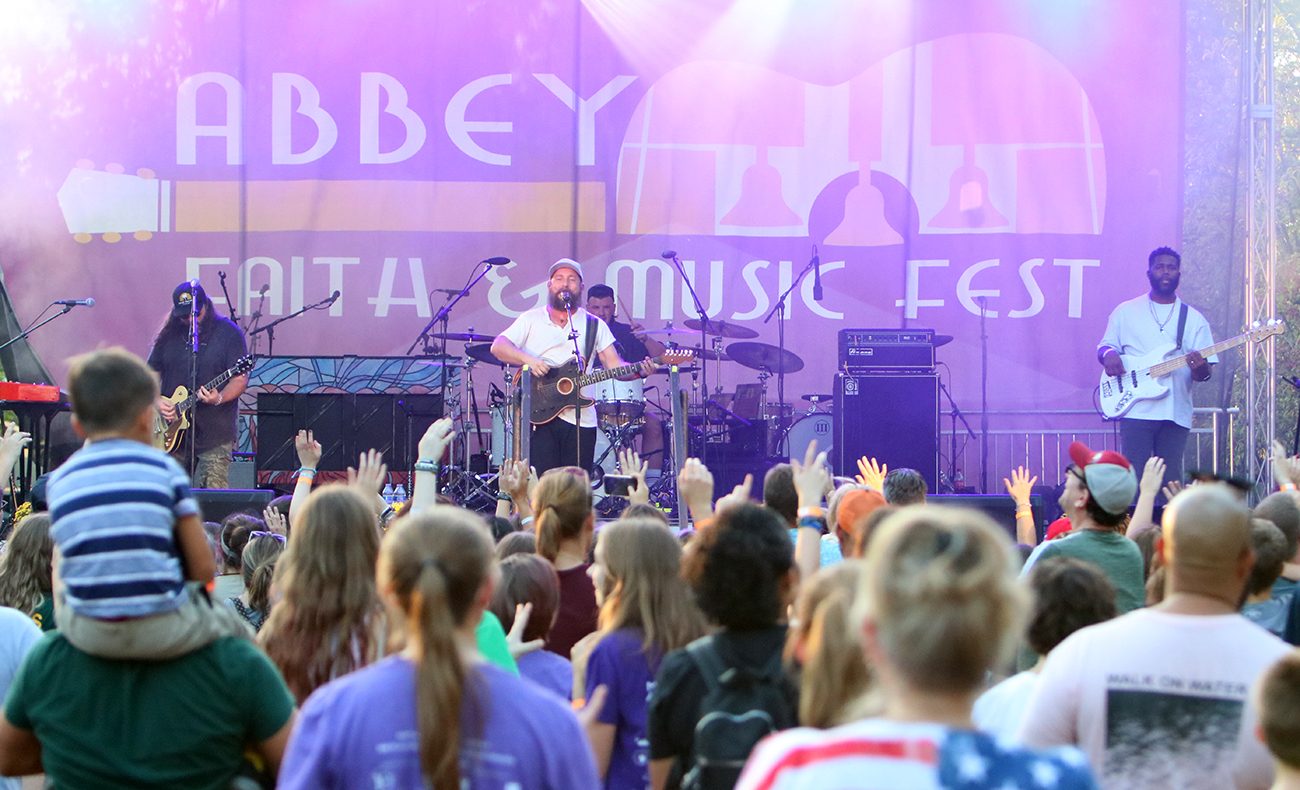 We Are Messengers performs during the seventh annual faith and music festival AbbeyFest, Sept. 18 at Daylesford Abbey, Paoli. (Photo by Sarah Webb)

Faith, family and music topped the bill last weekend at an all-day Catholic festival that drew hundreds to Chester County.

The seventh annual AbbeyFest took place Sept. 18 at Daylesford Abbey in Paoli, featuring a full slate of contemporary Catholic and Christian musical artists, along with Mass, Eucharistic adoration, confession, games, food and an array of vendors.

(See a photo gallery from day here, plus the full video of the festival here.)

After moving online last year due to COVID, the festival returned to an in-person format in full force, while still providing a livestream feed for its growing audience.

Headlining the show was nine-time Grammy nominee and three-time Dove Award winner Matt Maher, whose hits “Lord, I Need You” and “Because He Lives (Amen)” are mainstays on Christian radio playlists.

Also taking the stage were Firehill Worship, the Scally Brothers, Averlis and We Are Messengers — whose lead singer Darren Mulligan said the festival struck a chord that “changes the world.”

“It is the Bride of Christ, moving together in unity, in unison,” said Mulligan.

Actor Jonathan Roumie, who plays Jesus in the hit television series “The Chosen,” shared with the crowd his experiences as a Christian working in an industry often hostile to religious belief. 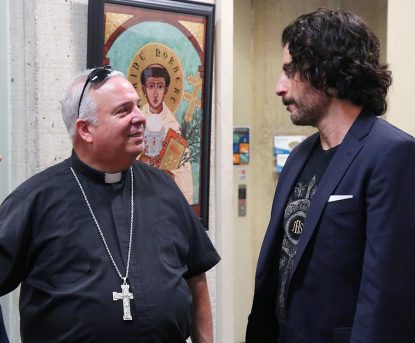 “I think it’s really important that you remain bold in your faith, because that’s the example Jesus gave,” said Roumie.

At the same time, he said, “We have to learn to be bold while being humble.”

In his homily for the festival’s vigil Mass, celebrant Archbishop Nelson Pérez (whom Roumie later described as “pretty much a rock star”) also stressed the critical importance of humility.

Reflecting on the day’s Gospel (Mk 9:30-37), the archbishop noted Jesus countered his disciples’ ambition for power with words that were “simple yet profound.”

Quoting Pope Francis’ apostolic exhortation Christus Vivit, the archbishop described youth as “the now of God” who instinctively “understand what it means to serve.”

Following holy Communion, Norbertine Abbot Domenic Rossi of Daylesford Abbey — one of several concelebrating priests at the Mass — invited young women and men “who may feel an openness to what God might call them to do” to receive a blessing from the archbishop. Some four dozen in total approached the stage.

AbbeyFest offered a friendly, relaxed setting for discussions on vocations, said seminarians from St. Charles Borromeo Seminary in Wynnewood, who along with several religious congregations were on hand to distribute information and answer questions about religious life.

“We’re talking with a lot of people and how they can discern with events like Quo Vadis weekends,” said Ed Town, now in first theology at the seminary. “It’s also encouraging to hear from people how much they’re praying for vocations for the church.” 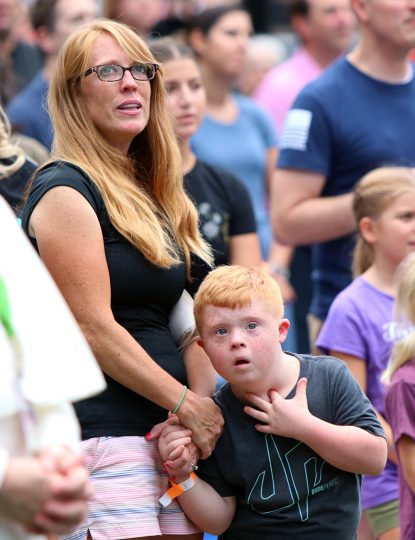 Monica Harduvy of St. Patrick Parish in Malvern — who along with her young children, Matthew and Charlotte, enjoyed the show from a comfortable spot in the shade — agreed.

After attending her first AbbeyFest a few years ago, Harduvy said she “felt cool to be Catholic.”

“I actually told other people at work about it,” she said. “It’s so easy for the kids. I brought my sister and my mom from New Jersey this year, and they’re going to get people from their church next year to come.”

Tracie Corbin, a member of St. Mary Parish in Schwenksville, brought her four boys and invited friends from New York State, who have six kids of their own, to join them.

“We’re looking forward to Mass, and to being with other Catholic families and listening to some good music,” she said.

AbbeyFest is a kind of “Catholic Woodstock,” joked Julie Baker of St. Philomena Parish in Lansdowne, who also staffed a vendor table hosted by the Legion of Mary.

“Where else do you go to a concert where you can have Mass, adoration, confession and really nice holy cards being given out?” she laughed.

Over the years, the festival – one of just a handful of its kind in the U.S. – has become increasingly sophisticated in its logistics and technical wizardry, but “the spirit hasn’t really changed all that much,” said Abbot Rossi.

“It’s just a joyful celebration of God and families coming together,” he said. 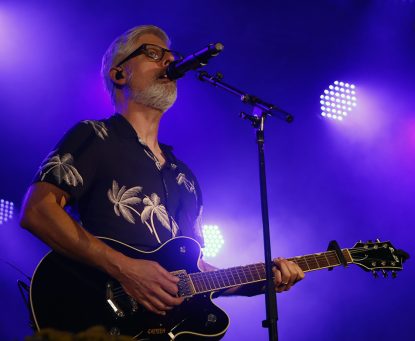 Headlining artist Matt Maher and his band play through a powerful set until eucharistic adoration that concluded AbbeyFest. (Photo by Mark Cordero)

Announcing the period of eucharistic adoration that followed his set, Maher invited participants to “pray with hearts, minds and bodies.”

“It’s time to open our hearts to Jesus,” he said.

NEXT: Festival brings Padre Pio to the people, and the people to God