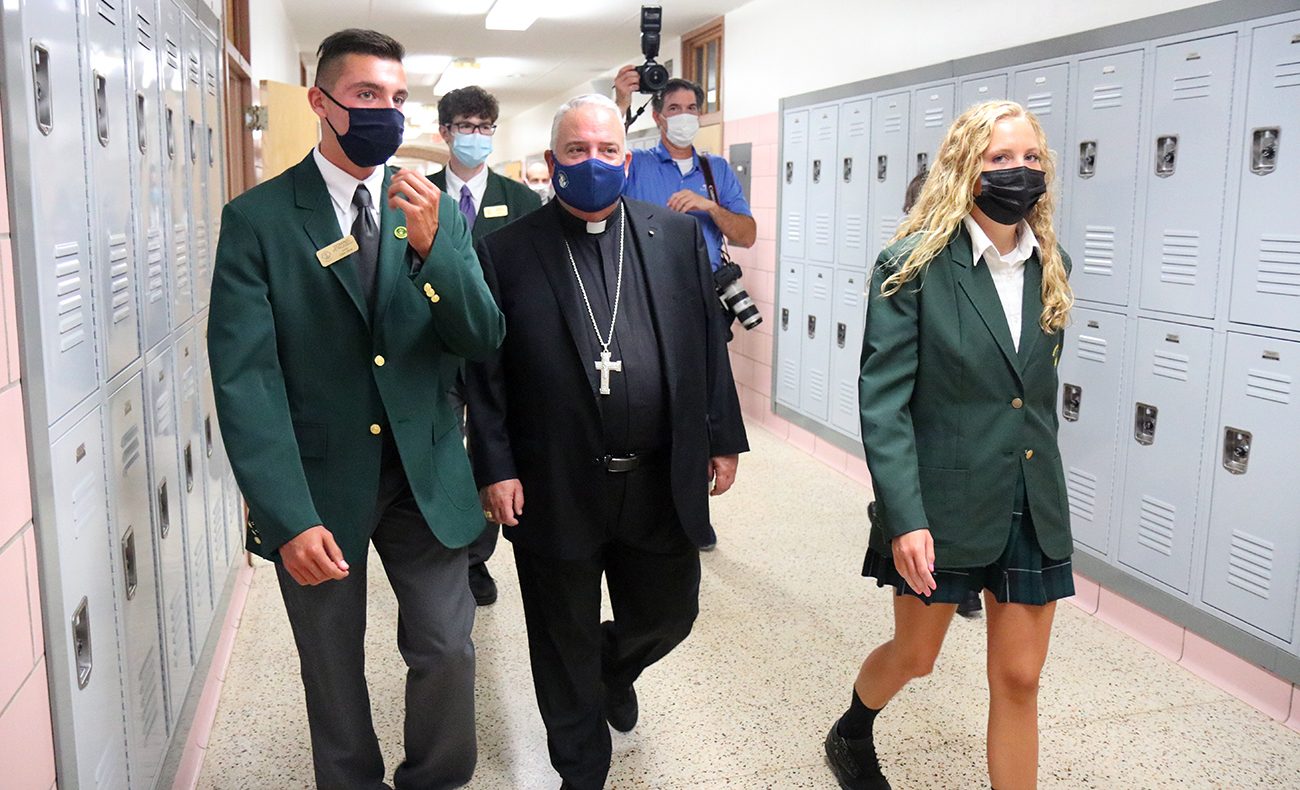 As students return to the classroom, the greatest lessons to be learned are “love, peace and thankfulness,” said Archbishop Nelson Pérez.

“If we could embrace those three words … the world would be such a better place,” said the archbishop in his homily during a Sept. 9 Mass at Archbishop Wood High School in Warminster.

(View a photo gallery from the visit.)

The liturgy – which capped the archbishop’s first school visit of the 2021-2022 academic year – was preceded by an extended tour of the building, led by members of Archbishop Wood’s student council.

When told by his guides the first bell normally rings at 7:20 a.m., Archbishop Pérez quipped, “You guys start early.”

Also on hand for today’s pastoral visit were Archbishop Wood president Gary Zimmaro and principal Cloe O’Grady, as well as Immaculate Heart of Mary Sister Maureen Lawrence McDermott, chief academic officer and superintendent of archdiocesan secondary schools, and Irene Horstmann Hannan, CEO of the Faith in the Future Foundation, which manages the 15 high schools and three schools of special education operated by the Archdiocese of Philadelphia.

“We thank God for his blessings, that we can be here in person,” said Hannan. “The kids want to be here with their friends and teachers, and if it means wearing masks, so be it.”

With more than 840 students enrolled, the Archbishop Wood community has expanded significantly since last year.

The school is now home to the archdiocesan Our Lady of Confidence High School Special Education Program (OLC), which relocated from its previous campus at the recently closed Bishop McDevitt High School.

At the Mass – served by both OLC and Archbishop Wood students — Archbishop Pérez blessed several crucifixes for placement in the new OLC classrooms.

Hannan said there are “already a lot of plans” for further integrating the two schools under one roof.

“We’re going to have a buddy system, and the students will be involved together in art, music and a lot of both extracurricular and academic activities,” she said. “It’s a very exciting chapter for these kids.”

A number of students from Bishop McDevitt have enrolled at Archbishop Wood, and at the start of today’s liturgy, Archbishop Pérez offered them a “shoutout,” inviting those present “give them a round of applause” after “a tough year.”

Yet regardless of “great teachers, great resources and a wonderful student body,” said the archbishop, “the most singular thing that distinguishes this school from others” is the ability to “celebrate our faith” as part of the educational process.

“It makes this school unique, different and transformative,” said Archbishop Pérez, adding that students will “understand and hear the things of God, (which) will give you the strength, the courage and the stamina to do all God expects.”

The archbishop admitted he “had a lot of teachers” from grade school to graduate school, but only remembered three on account of “their kindness … their compassion … their humanity.”

Reflecting on the Scripture readings for the day (the memorial of St. Peter Claver), the archbishop said charity, peace and forgiveness are the ultimate goals of life’s lesson plan – as is gratitude, which is “at the very heart and center of Christianity.”

“Everything you and I have really is a gift, and we have it only for a time,” he said. “Your whole being began as a gift. We need to recognize that and be grateful.”