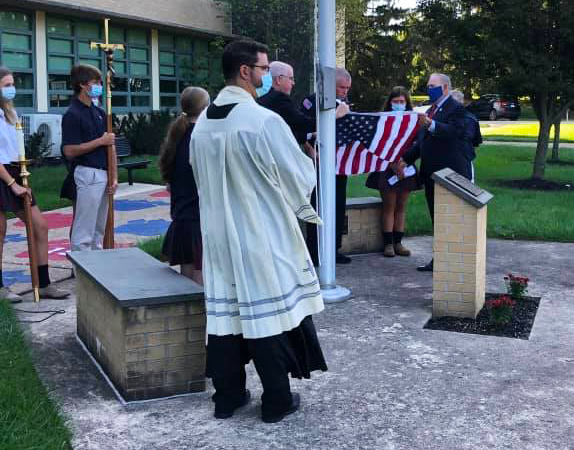 Schools and parishes throughout the Philadelphia Archdiocese are marking the 20th anniversary of the Sept. 11 terrorist attacks with prayers, reflections and salutes to first responders.

On Friday morning, Sept. 10, Cardinal O’Hara High School in Springfield welcomed Col. Richard Breen, a 1973 graduate and director of strategic communications and outreach at the Office of the Assistant Secretary of Defense for Health Affairs. Col. Breen was on the ground at the Pentagon, one of the 9/11 attack’s four sites, and was a spokesman that day as events unfolded.

After Col. Breen’s talk, students assembled outside for a memorial service led by campus minister Father John Masson. The ceremony included a student performance of “Taps,” as well as the national anthem and a folding of the U.S. flag.

On its Facebook page, the school noted it had lost two members of its community to the attacks:  Tim Soulas (Class of 1984), who worked in the World Trade Center, and Debbie Jacobs Welsh, daughter of O’Hara faculty member Lee Jacobs, and an attendant on United Flight 93.

The plane’s crew and passengers revolted against hijackers before the plane could be crashed into the U.S. Capitol, sacrificing their lives as the attackers instead downed the aircraft in a field near Shanksville, Pennsylvania.

The St. Ephrem School community in Bensalem also gathered today for a memorial prayer service in front of that parish’s church. Local firefighters and police officers were on hand as the ceremony began with a moment of silence and a tolling of bells to honor first responders and all who lost their lives in the 9/11 attacks, in addition to those who fought and died in the global war on terror sparked by the tragedy.

Each teacher, accompanied by a student, received a flag to display outside of the school’s classrooms for the academic year.

St. Katharine Drexel School in Holland will hold an outdoor prayer service Friday afternoon, with students placing small American flags near the school’s main sign in remembrance of the attack’s victims. Also on Friday at 1 p.m., students at St. Albert the Great Catholic School, Huntingdon Valley, will pray a decade of the rosary over the school’s public address system.

Archdiocesan school football fields will also host remembrances of the attack. A moment of silence will precede Saturday afternoon’s 1 p.m. game at Pope John Paul II in Royersford, before that school faces off against Springside Chestnut Hill Academy.

Before Saturday evening’s 7 p.m. game between Father Judge and Archbishop Ryan High Schools (to be played at Northeast High School in Philadelphia), a flag ceremony and a moment of silence will be observed. Alumni first responders will be invited onto the field to help hold the American flag and the school’s flags, including the “27” flag representing the number of Father Judge alumni killed in the Vietnam War.

The school also created a commemorative logo that blends visual elements of both the Father Judge brand and the 20th anniversary of the 9/11 attacks.

Saturday morning, Sept. 11, St. Anastasia Parish in Newtown Square will celebrate a special Blue Mass at 11 a.m. to honor first responders and to “(commend) to God those who have fallen,” said the parish’s pastor, Father Brandon Artman. He said he “chose the 20th anniversary of the 9/11 attacks for its significance.”

First responders from throughout the Delaware Valley are invited to attend the liturgy, for which the guest homilist will be Oblate Father Steven Wetzel, chaplain of the Michael the Archangel Ministry at the Philadelphia Lodge #5 Fraternal Order of Police.

Also on Sept. 11 at 10 a.m., St. Isaac Jogues Parish in Wayne will celebrate its annual Blue Mass with first responders, followed by a bell ringing ceremony with ecumenical and civic representatives in the outdoor prayer garden.

Next weekend, St. Mary Magdalen Parish in Media will hold a “9/11 Commemorative Service” Sunday, Sept. 19 at 3:30 p.m. in the church. The gathering will include a procession of light as well as a performance of Morten Lauridsen’s “Lux Aeterna (Light Eternal)” by the Main Line Ecumenical Choir under the direction of Ralph Purri. Local police, firefighters and EMTs will participate, and a free-will offering to benefit first responders will be taken up.

Bringing the events of 9/11 to the Lord in prayer is appropriate and essential, said Father Wetzel, who as a deacon preached a homily hours after the attacks.

“I quoted St. Francis de Sales, who says that ‘fear is the opposite of hope,’” he recalled. “As we prepare to look at 9/11 from 20 years on, I still carry the image of St. Francis de Sales saying that. We cannot be fearful – but we can definitely be hopeful.”

NEXT: Blue Mass honors heroes of 9/11, calls all to bring Christ to the world