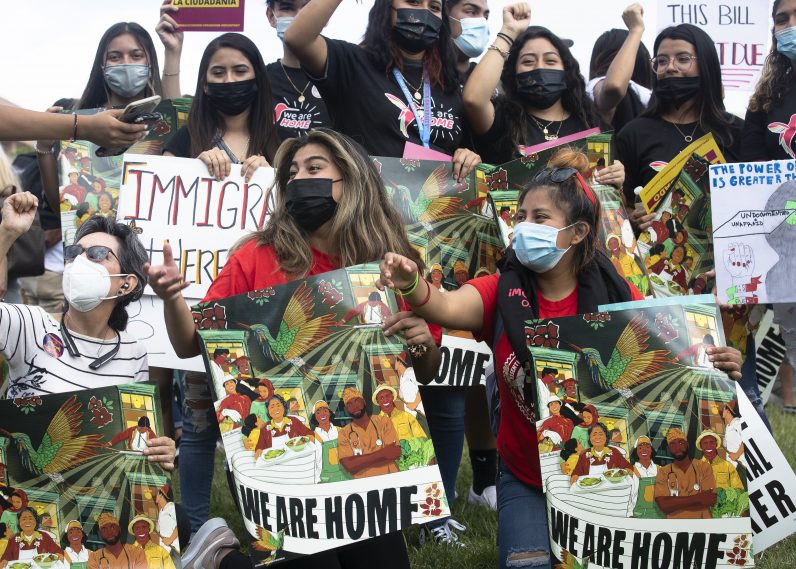 WASHINGTON (CNS) — For months, the Biden administration has been publicly hammering an unwelcoming message to those trying to enter the U.S. illegally at the southernmost part of the country: “The border is closed.”

That was the message Secretary Alejandro Mayorkas of the Department of Homeland Security repeated during his most recent visit to the U.S.-Mexico border at Del Rio, Texas, Sept. 20.

He was there that day for a briefing and to answer questions about the latest political firestorm over thousands of Haitian nationals and other migrants stranded under and around an international bridge.

“We are communicating, as we have now for months, loudly and clearly that irregular migration, the perilous journey, is not the journey to take,” Mayorkas said. “One risks one’s life, the life of one’s loved ones, for a mission that will not succeed.

“We have been, we are and we will continue to exercise the public health authority of the Centers for Disease Control (to expel migrants) in light of the fact that this country and this world is confronting a pandemic.”

But some say that what the Biden administration says and what it does are two different things.

Mayorkas said in his Del Rio visit that the “majority of migrants continue to be expelled under CDC’s Title 42 authority,” the provision enacted during the Trump administration that allows expulsions at the border because of public health concerns during the pandemic.

However, two Biden administration officials told The Associated Press that migrants under the bridge had been allowed to enter the U.S. on a “very, very large scale.” It’s an account repeated by various news organizations. 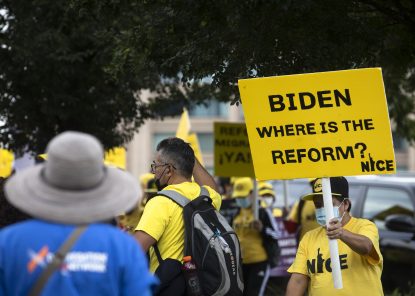 The administration has not released figures on how many of the estimated 10,000 to 14,000 migrants at Del Rio were allowed to enter the U.S. and how many were expelled.

But the fallout and outcry has been steady and comes from a variety of groups, including many faith-based organizations, that initially saw the Biden presidency as an ally, marking a turning-of-the-page on the immigration front after the Trump years when migrant children were separated from their families.

The current situation, particularly the one involving the Haitian migrants, has soured many. Instead of the hope they once expressed, many now voice disappointment.

“Seeing the cruelty and violence inflicted on Haitian migrants seeking asylum in Del Rio, Texas, this week is shocking but not new,” said Susan Gunn, director of the Maryknoll Office for Global Concerns, in a statement released Sept. 22 by the Interfaith Immigration Coalition. It included declarations from Catholic groups such as Sisters of Mercy of the Americas and the Columban Center for Advocacy.

“Like the time not too long ago when thousands of children were separated from their families by Border Patrol agents, we collectively ask our president, ‘Is this who we are?'” Gunn said.

Much of the outrage came following video and photos of Border Patrol agents on horses who, while outnumbered by migrants on a stretch of a riverbank on the U.S. side, were aggressive while attempting to drive back a group to the Mexico side. And though the agents didn’t seem to physically harm anyone, the image of them mounted on the horses, grabbing long reins as they tried to control the situation, elicited a visceral reaction.

During the Del Rio visit by Mayorkas, U.S. Border Patrol Chief Raul Ortiz explained that given the chaos the agents encountered, authorities didn’t know whether those trying to get away were smugglers, who belong to criminal elements, or migrants.

He said there would be an investigation.

“As was witnessed in the videos, some of the pictures, the migrants were going back and forth, we do not know who are the smugglers and who are the migrants,” Ortiz said. “So, it’s important that those Border Patrol agents maintain a level of security for themselves as well as the migrant population.”

However, officials didn’t explain part of a video clip where one of the agents says to one of them: “You use your women for this? That’s why your is country is…” and seems to use an expletive.

“Black lives matter not only in this country, but also in Haiti, with the thousands of Black Haitian lives seeking refuge from horrific situations,” she said, adding her voice to the statement of the Interfaith Immigration Coalition.

“Yes, the increase of migrants present at the border is challenging. But the United States is not a small, helpless country. We can meet the challenges if we have the will,” she said.

Daniel Foote, the U.S. special envoy to Haiti, resigned Sept. 22 because of the administration’s stance of returning the Haitian migrants to their homeland, which he called a “collapsed state,” one ill-equipped to handle the influx of returnees who have little to go home to in a country “mired in poverty, kidnappings, robberies … suffering under a corrupt government with gang alliances.”

“I will not be associated with the United States’ inhumane, counterproductive decision to deport thousands of Haitian refugees and illegal immigrants to Haiti, a country where American officials are confined to secure compounds because of the danger posed by armed gangs in control of daily life,” he said.

As some see the administration’s actions at the border as going too far, others say they are not going far enough.

“What we’re seeing in Del Rio is the definition of an open-border policy, and the most inhumane approach to border security possible. We’ve been seeing it for eight months now, but the stark images coming out of Del Rio should outrage every American,” said Chad Wolf, former acting DHS secretary under Trump.

He made the comments in a news release from the Heritage Foundation, a Washington think tank, where he is now a visiting fellow.

Wolf said the “self-inflicted, unmitigated crisis across our border makes one thing clear: No amount of illegal immigration will ever be enough for the left.”

The Heritage Foundation in the statement attacked efforts by Democrats to include immigration reform in the budget reconciliation bill process and said there would be no end in sight to problems at the border if they have their way.

“The American people are tired of being treated as second-class citizens by their own government. They are tired of being told they must completely alter their lives due to COVID, while illegal aliens aren’t even required to be tested for COVID before being released into the United States,” said Lora Ries, former acting DHS deputy chief of staff, who’s also a fellow at the foundation.

“They are sick of watching record amounts of drugs pour across our border and into our communities, where more than 93,000 Americans died from overdoses just last year,” she said.

Fran Eskin-Royer, executive director of the National Advocacy Center of the Sisters of the Good Shepherd, who also joined the Interfaith Immigration Coalition in its outrage, pleaded for respect for the life of those seeking refuge, particularly those from Haiti, saying their needs and safety can’t wait.

“For, whether they came recently from Haiti or have been displaced in our hemisphere for a decade, we believe they are refugees and must be treated as such,” she said. “Their country has known nothing but tragedy for decades. We must give them respite.” 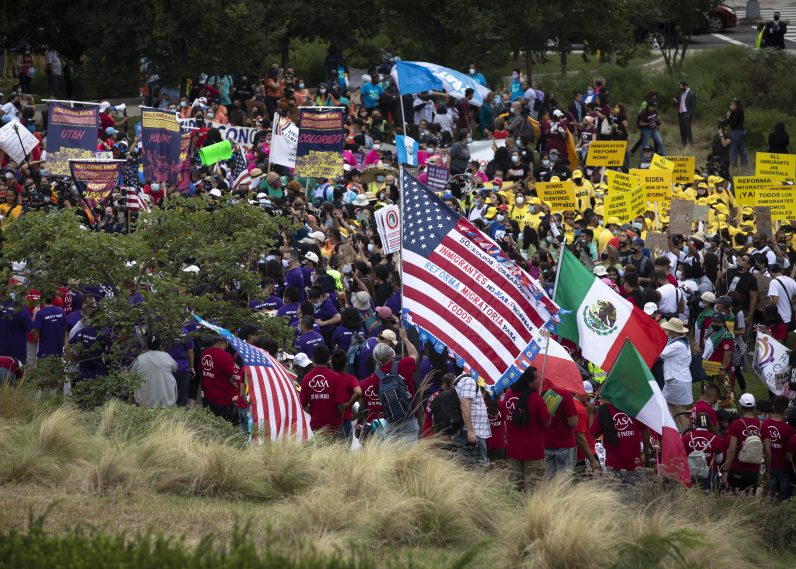 Migrant families and immigration advocates in Washington call for a pathway toward U.S. citizenship as they march toward the U.S. Immigration and Customs Enforcement building Sept. 21, 2021. (CNS photo/Tyler Orsburn)

NEXT: Synodal process looks to hear from voices on the margins of the church