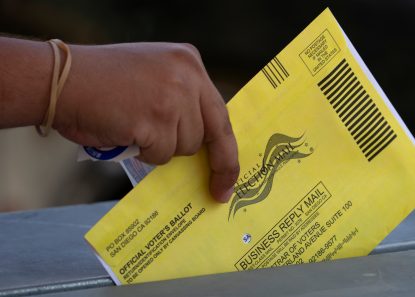 An election worker in San Diego, Calif., places mail-in ballots into a voting box at a drive-through drop off location at the Registrar of Voters for San Diego County Oct. 19, 2020. (CNS photo/Mike Blake, Reuters)

(CNS) — Polarization across society has prompted the U.S. Conference of Catholic Bishops to launch an initiative that looks to bring people together to serve the common good.

Called “Civilize It: A Better Kind of Politics,” the initiative is designed to “move forward the kind of conversations that we need to be having to overcome our divisions,” said Jill Rauh, director of education and outreach in the USCCB’s Department of Justice, Peace and Human Development, which is coordinating the effort.

The USCCB introduced the initiative Sept. 7.

The effort draws heavily from the teachings of Pope Francis, particularly his call in the third encyclical of his papacy, “Fratelli Tutti, on Fraternity and Social Friendship.”

“We are in a situation where both in society and the church we are experiencing a lot of division and polarization,” Rauh told Catholic News Service. “In Fratelli Tutti, Pope Francis specifically is calling Catholics and all people of goodwill to build a better kind of politics, one at the service of the common good.”

The Civilize It initiative is meant not just for political leaders, but for all people, Rauh added.

A special webpage for the initiative, CivilizeIt.org, has links to a tool kit with resources to help parishes, small groups and individuals address polarization of any kind.

“Pope Francis is very clear in ‘Fratelli Tutti’ and the bishops have been clear in ‘Forming Consciences for Faithful Citizenship’ that we are called to engage in the public sphere and to do so year-round, to be working together and to try to identify ways to work for the common good,” Rauh said.

“Forming Consciences” is the bishops’ quadrennial document on election participation.

Other USCCB offices also are promoting the initiative, Rauh said. In addition, leaders in at least 45 dioceses are planning to incorporate the initiative in diocesan programs and more are expected to also take part.

Tool kit resources range from a Prayer for Civility that draws from the Peace Prayer of St. Francis of Assisi to a reflection titled “Loving our Neighbor through Dialogue.” Other materials include a study guide and parish bulletin inserts.

Website visitors are invited to sign a pledge saying they will rely on “charity, clarity and creativity” to promote understanding and dialogue over division.

Signers pledge to affirm each person’s dignity, even when they disagree with someone and respectfully listen to others “to understand experiences different from my own.”

The pledge also invites signers to engage in “critical examination to ensure that my perspectives are rooted in truth, that my sources of information are unbiased and that I not open myself to manipulation by partisan interests.”

Other actions listed with the pledge include becoming a “bridgebuilder who participates in constructive dialogue based in shared values” and to see differences in perspectives as “opportunities for creative tension which can yield solutions for the common good.”

The initiative builds on a program with a similar name introduced by the Department of Justice Peace and Human Development for the 2020 election cycle. That effort sought to remind people that civility in political discussions, not rancor, is a virtue.

The idea for “Civilize It” originated in the Social Action Office of the Archdiocese of Cincinnati in 2016. Its success in Ohio caught the attention of the USCCB, which decided that the model, with a few tweaks, could be introduced nationwide in 2019.