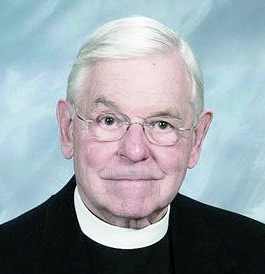 Msgr. Bernard J. Trinity, pastor emeritus of Our Lady of Good Counsel Parish in Southampton, died Thursday, Sept. 2. He was 93.

He was born in Philadelphia, son of the late James P. and Catherine (Loftus) Trinity. After attending Our Lady of the Rosary School and St. Thomas More High School, both in West Philadelphia, he entered St. Charles Borromeo Seminary.

He was ordained May 8, 1954 at the Cathedral of SS. Peter and Paul, Philadelphia by Archbishop John F. O’Hara, C.S.C. He was named honorary prelate of Pope John Paul II in 1985.

In 1981 he was appointed pastor of Our Lady of Good Counsel Parish, Southampton and named pastor emeritus in 2003. He had been a resident at St. Denis Parish, Havertown until the time of his death.

St. Denis Church will host the Reception of the Body on Wednesday, Sept. 8 at 4:30 p.m.

Archbishop Nelson J. Pérez will celebrate the funeral Mass on Thursday, Sept. 9 at 11:30 a.m., preceded by a viewing at 9 a.m.

Concelebrating the Mass will be Fathers Kevin J. Gallagher, James J. Cardosi and G. Dennis Gill, who will also be the homilist.

Msgr. Trinity is survived by his nieces.