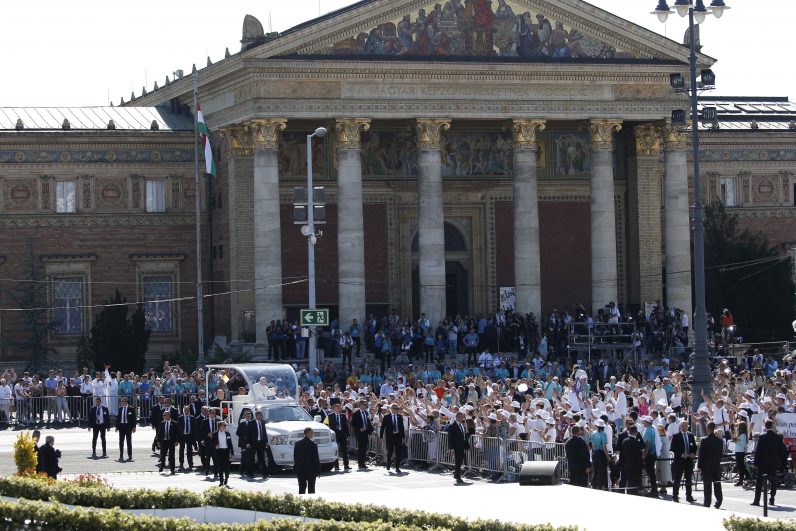 Pope Francis greets the crowd as he arrives to celebrate the closing Mass of the International Eucharistic Congress at Heroes’ Square in Budapest, Hungary, Sept. 12, 2021. (CNS photo/Paul Haring)

BUDAPEST, Hungary (CNS) — Spending time in adoration of the Blessed Sacrament can heal Christians from a self-absorbed religiosity that is ostentatious and triumphalist, Pope Francis said.

Presiding over the closing Mass of the International Eucharistic Congress Sept. 12, the pope urged people to make time for eucharistic adoration.

“Let us allow Jesus, the living bread, to heal us of our self-absorption, open our hearts to self-giving, liberate us from our rigidity and self-concern, free us from the paralyzing slavery of defending our image, and inspire us to follow him wherever he would lead us,” he said.

After departing from Rome’s Fiumicino in the early morning, the pope told journalists aboard the flight that the papal trip had “a bit of a farewell feeling” due to it being the last time that Bishop-designate Guido Marini would serve as papal master of ceremonies. The pope named the bishop-designate to lead the Diocese of Tortona, Italy.

Pope Francis also noted that it was the final papal flight aboard Alitalia, which will shutter operations in October after serving 75 years as Italy’s national airline.

“So many farewells, but we continue the trips again, and this is something very important, because we will go to bring the word and a greeting to so many people,” he said of the visit, which included three days in Slovakia after the short visit to Budapest.

Landing in Budapest, the pope was welcomed by Hungarian Deputy Prime Minister Zsolt Semjén. He then made his way to the Museum of Fine Arts near the site of the closing Mass of the International Eucharistic Congress. 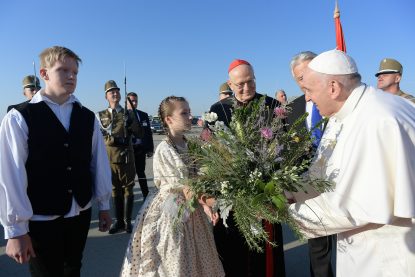 Pope Francis accepts flowers from a girl as he arrives at the international airport in Budapest, Hungary, Sept. 12, 2021. Looking on are Cardinal Péter Erdo of Esztergom-Budapest and Zsolt Semjén, deputy prime minister of Hungary, pictured behind the pope. (CNS photo/Vatican Media)

In a statement on his Facebook page, Orbán, who views migration as a threat to Europe’s Christian identity, said, “I asked Pope Francis not to let Christian Hungary perish.”

Pope Francis, arriving in his popemobile, was greeted warmly by thousands who lined the street leading toward the Mass site in Heroes’ Square.

In the homily, Pope Francis reflected on the Sunday Gospel reading, in which Jesus asks his disciples, “Who do you say that I am?”

Jesus, he said, addresses the same question to Christians today and requires a response that is “more than a quick answer straight out the catechism.”

The first step in responding to Jesus’ question, he explained, is to proclaim Jesus as Lord. However, the pope recalled that Jesus told his disciples to “tell no one about him.”

“There was a very good reason: to call Jesus the Christ the Messiah is correct, but incomplete. There is always the risk of proclaiming a false messianism, one of human origins, not from God,” he said.

Nevertheless, to proclaim Christ means also proclaiming his death on the cross, and the Eucharist serves as a reminder of God “as bread broken, as love crucified and bestowed.”

Like Peter, who was scandalized at Christ’s announcement of the suffering he must endure, Christians can also “be blinded by that way of thinking.”

“We, too, can take the Lord ‘aside,’ shove him into a corner of our heart and continue to think of ourselves as religious and respectable, going our own way without letting ourselves be affected by Jesus’ way of thinking,” the pope said.

Lastly, Christians must learn to “walk behind Jesus,” because Christianity is not “a race toward success” but to find true freedom in “not needing to be the center of everything.”

In doing so, Pope Francis said Christians can learn to follow in the footsteps of Christ, “who came to serve and not be served.”

“The Eucharist impels us to this encounter, to the realization that we are one body, to the willingness to let ourselves be broken for others,” the pope said.

Prior to celebrating the closing Mass, Pope Francis met in private with the country’s bishops. He then met with Hungary’s Ecumenical Council of Churches, along with several Jewish communities. Ecumenical Patriarch Bartholomew of Constantinople was among those at the Mass and the meeting with religious leaders.

Noting the recent celebration of Rosh Hashanah and the Sept. 15-16 observance of Yom Kippur, Pope Francis offered best wishes and expressed his appreciation for the Jewish communities’ efforts “to break down the walls that separated” Jews and Christians in the past.

Just as God “transformed the desert into a highway to the Promised Land, so he wishes to bring us out of the barren deserts of bitterness and indifference, to that land of fellowship for which we long,” the pope said.

Drawing a parallel on the famed Széchenyi Chain Bridge, which links the eastern and western sides of Budapest, the pope noted that the bridge “does not fuse those two parts together, but rather holds them together.”

“That is how it should be with us, too. Whenever we were tempted to absorb the other, we were tearing down instead of building up. Or when we tried to ghettoize others instead of including them,” the pope said.

“How often has this happened throughout history,” he added. “We must be vigilant and pray that it never happens again.”

Lamenting “the threat of anti-Semitism still lurking in Europe and elsewhere,” Pope Francis said the best way to defuse hatred is “to work together positively and to promote fraternity.

“The bridge has yet another lesson to teach us,” he said. “It is supported by great chains made up of many rings. We are those rings, and each of us is essential to the chain. We can no longer live apart, without making an effort to know one another, prey to suspicion and conflict.”

PREVIOUS: Horrors of Holocaust must not be forgotten, pope tells Slovak Jews

NEXT: Pope: Bishops must handle Communion debate as shepherds