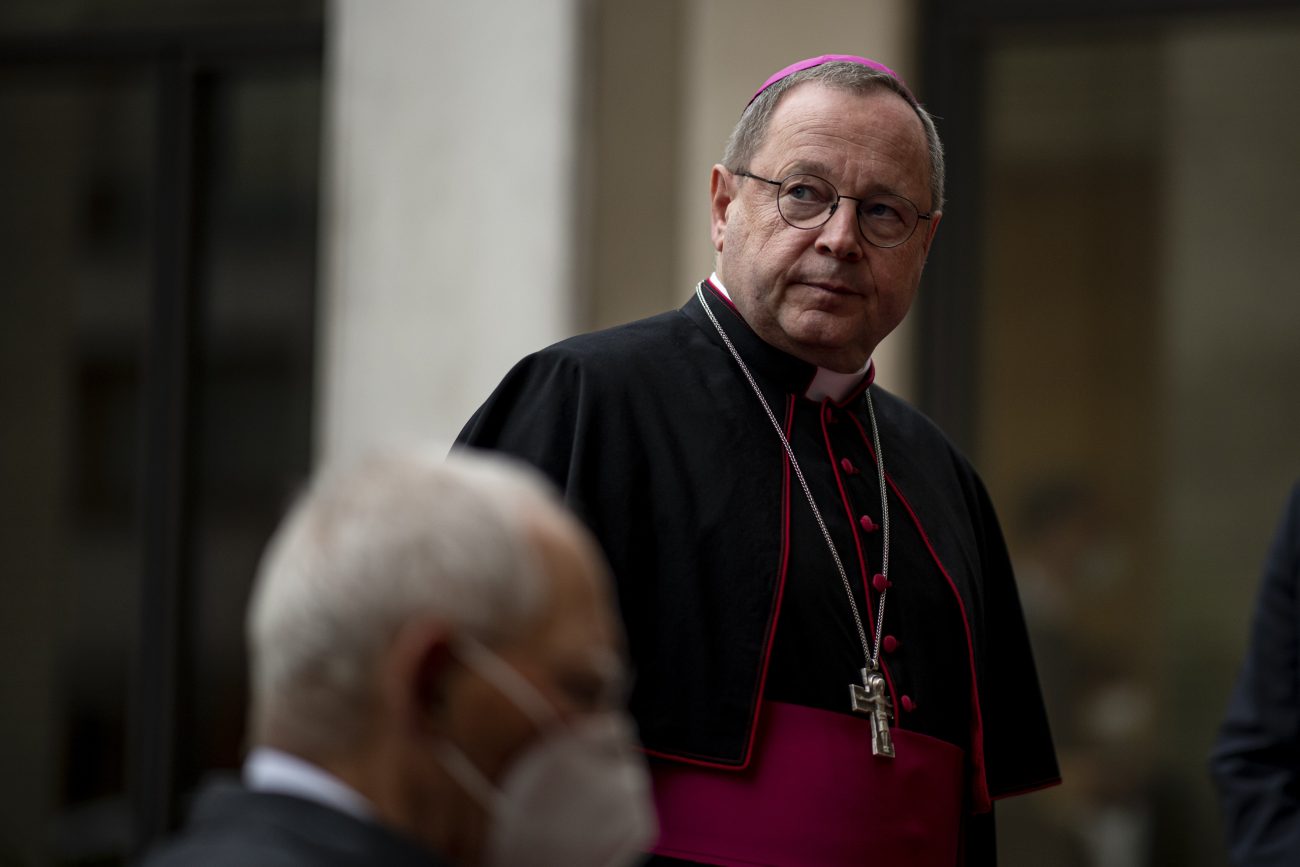 Bishop Georg Bätzing, president of the German bishops' conference, is pictured at the annual St. Michael's reception in Berlin Sept. 27, 2021. In an address at the conference, Bishop Bätzing criticized the Vatican's stance of refusing blessings for same-sex couples and the way it has dealt with German bishops embroiled in covering up sexual abuse in their dioceses. His speech was delivered in the presence of some 200 faith representatives and politicians, including German Chancellor Angela Merkel. (CNS photo/Fabian Sommer, KNA pool)

He spoke of a “turning point” and a “creeping loss of relevance” of the Catholic Church and criticized the Vatican’s stance on refusing the blessings for same-sex couples and the way it dealt with German bishops embroiled in covering up sexual abuse in their dioceses.

At the annual St. Michael’s reception Sept. 27, he told 200 politicians and guests from faith communities that many people found it difficult to understand Pope Francis’ decisions to keep the archbishops of Cologne and Hamburg in office, after reports found that they covered up sexual abuse by clergy.

“I do not want to go into details here, but I would like to emphasize that there is considerable uncertainty, irritation and lack of understanding. My concern is that this will once again have a negative impact on church loyalty and church solidarity,” the bishop said in the presence of German Chancellor Angela Merkel.

A Sept. 24 statement from the German bishops’ conference said Cardinal Rainer Maria Woelki of Cologne has “made major mistakes in his approach to the issue of coming to terms with abuse overall, especially at the level of communication.” However, it said, a Vatican investigation found he did nothing illegal in his handling of clerical sex abuse allegations, and after a long conversation, Pope Francis granted the cardinal a sabbatical from mid-October until March 1.

Hamburg Archbishop Stefan Hesse has been accused of 11 breaches of duty in dealing with sexual abuse, in his former post as head of personnel in the Archdiocese of Cologne. In March, he offered his resignation to the pope, who instead granted him a leave of absence.

Bishop Bätzing started his speech by quoting Father Tomáš Halík, a Czech theologian, who wrote, “The great ship of yesterday’s traditional Christianity is sinking to the bottom, and we should not waste time pushing the deck chairs back and forth on the Titanic. If anyone thinks that the current storms surrounding sexual abuse will pass and everything will go back to the way it was before, they are mistaken.”

Bishop Bätzing spoke of outer and inner disruptions in the church.

“These sociologically tangible phenomena of massive upheaval correspond to a fundamental disturbance of trust toward the church and church activity that cannot be described in any other way than as an inner disruption,” he said.

“The findings on the extent of sexual and spiritual abuse in the Catholic Church have led to a profound loss of trust in large parts of the population,” he added.

The bishop said the Catholic Church is diversifying, but it is doing so at very different speeds.

“While, for example, comprehensive reforms and changes are demanded within the framework of the Synodal Path, there are admonishing words or clarifications from the Roman Curia on questions that are considered to have been answered long ago in our enlightened and freedom-loving society, and which thus increase the difficulty for many believers and many pastors of arguing the case.”

The Second Assembly of the German Synodal Path, the highest body in the reform project launched in January 2020, will meet in Frankfurt Sept. 30-Oct. 2. The 230-member assembly will discuss and vote on 16 input papers on topics such as power and separation of powers in the church; priestly existence today; women in ministries and offices in the church; and sexuality and morality. The topics have been discussed in smaller forums in preparation for the synod.

Bishop Bätzing is the co-chairman with Thomas Sternberg, president of the Central Committee of German Catholics.

The bishops’ conference and the lay Central Committee of German Catholics launched the Synodal Path as an attempt to revitalize the church and restore trust following a September 2018 church-commissioned report that detailed thousands of cases of sexual abuse by Catholic clergy over six decades.

Looking ahead to the assembly, Bishop Bätzing said the Synodal Path is “the great opportunity with which we want to give an answer to the challenges of the present.” It is essential, he said, to “reconnect the concrete conditions of life with the Gospel of Jesus Christ.”