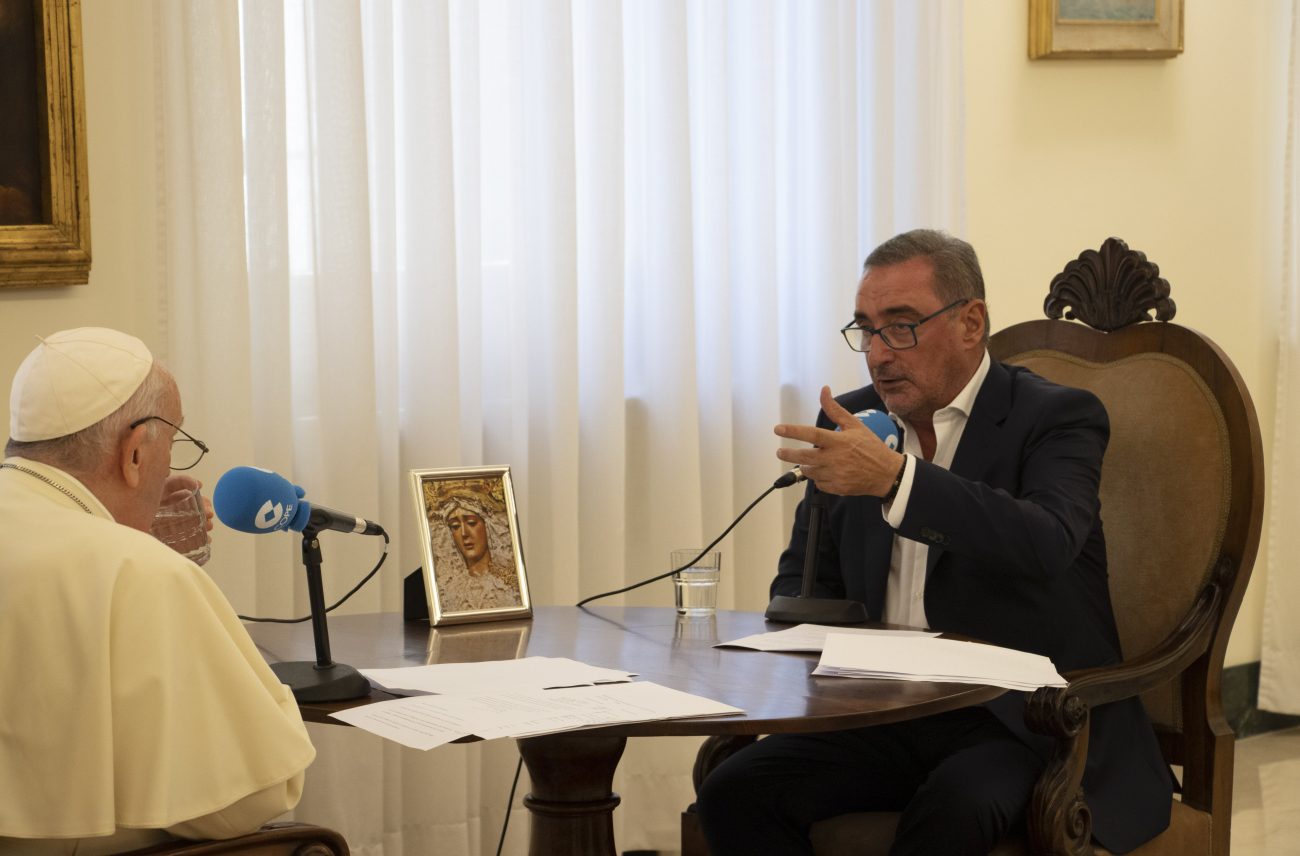 Pope Francis is interviewed by Carlos Herrera of COPE, the radio network owned by the Spanish bishops' conference, at the Vatican in late August. In a 90-minute interview, the pope addressed the situation in Afghanistan, the legalization of euthanasia in Spain and the question of Catalan independence. He also spoke about his own health. (CNS photo/courtesy COPE)

VATICAN CITY (CNS) — In his first interview since undergoing surgery in July, Pope Francis criticized Western attempts to impose democracy on other countries in the wake of the U.S. withdrawal in Afghanistan.

In a 90-minute interview with COPE, the radio network owned by the Spanish bishops’ conference, broadcast Sept. 1, the pope commented on the United States’ “20 years of occupation and then leaving” Afghanistan.

However, he mistakenly attributed a quote to German Chancellor Angela Merkel that criticized attempts to impose democracy in other countries; it was said by Russian President Vladimir Putin.

“It’s necessary to stop the irresponsible policy of enforcing its own values on others and attempts to build democracy in other countries based on outside models without taking into account historic, ethnic and religious issues and fully ignoring other people’s traditions,” Putin said during an Aug. 20 meeting with Merkel in Moscow.

“Concise and conclusive,” the pope said about the quote. “I think this says a lot; and everyone can interpret it as they wish. But there I felt a wisdom in what this woman said.”

In April, President Joe Biden announced a complete withdrawal of U.S. troops in Afghanistan by Sept. 11. However, as Taliban fighters took control of the country, Biden sped up the withdrawal and ordered the U.S. military mission in Afghanistan to conclude Aug. 31.

As throngs of people desperate to leave the country crowded a gate of the Hamid Karzai International Airport Aug. 26, a suicide bomber detonated an explosion, killing at least 169 civilians and 13 U.S. service members.

The Islamic State’s affiliate in Afghanistan, known as Islamic State Khorasan, claimed responsibility for the deadly attack, saying the suicide bomber was targeting Afghan collaborators with the U.S. Army.

In the interview, the pope said that while the reasons for withdrawing Afghanistan were legitimate, the way it was carried out did not take into account “all the eventualities.”

“I don’t know whether there will be a review or not, but certainly there was a lot of deception, perhaps on the part of the new authorities,” he said. “I say deceit or a lot of naiveté; I don’t understand.”

Nevertheless, the pope said that the situation in Afghanistan is yet another sign that “we live in a world of wars” and “that as pastor, I must call Christians to a special time of prayer.”

“I am going to try to ask for what the church always asks for in times of great difficulty and crisis: more prayer and fasting,” he said. “Prayer, penance and fasting, which is what is asked for in moments of crisis.”

Pope Francis also addressed concerns about his health and the subsequent rumors that circulated regarding his possible retirement. While he receives daily news reports, the pope said he “found out much later … that there was something about me resigning.”

“Whenever a pope is ill, there is always a breeze or a hurricane of conclave,” he said.

The pope was admitted to Gemelli hospital July 4 to undergo “a scheduled surgical intervention for a symptomatic diverticular stenosis of the colon.”

He underwent a three-hour left hemicolectomy, which is the removal of the descending part of the colon, a surgery that can be recommended to treat diverticulitis, when bulging pouches in the lining of the intestine or colon become inflamed or infected.

Pope Francis told COPE that since his recovery, he leads “a totally normal life” and that “now I can eat everything, which was not possible before” the medical procedure.

“I still have the post-operative medications because the brain has to register that it has 33 centimeters less intestine. And everything is managed by the brain, the brain manages our whole body, and it takes time to register it,” he said.

The document declared the liturgical books promulgated after the Second Vatican Council to be “the unique expression of the ‘lex orandi’ (law of worship) of the Roman Rite,” restored the obligation of priests to have their bishop’s permission to celebrate according to the “extraordinary” or pre-Vatican II Mass and ordered bishops not to establish any new groups or parishes in their dioceses devoted to the old liturgy.

Furthermore, priests currently celebrating Mass according to the old missal must request authorization from their bishop to continue doing so and for any priest ordained after the document’s publication July 16, the bishop must consult with the Vatican before granting authorization.

Pope Francis said he regarded Pope Benedict XVI’s 2007 apostolic letter, “Summorum Pontificum,” which allowed priests to celebrate the “extraordinary form” of the Mass according to the rite published in 1962, to be “one of the most beautiful and human pastoral things” done by his predecessor.

Nevertheless, 13 years after its promulgation, an evaluation involving all bishops from around the world was necessary, he explained.

“The concern that appeared the most was that something that was done to pastorally help those who have lived a previous experience was being transformed into ideology,” the pope said. “That is, from a pastoral thing to ideology. So, we had to react with clear norms; clear norms that put a limit to those who had not lived that experience.”

The pope said he worked with “traditionalist people of good sense” in drafting “Traditionis Custodes” and that it emphasized pastoral care “with some good limitations.”

“For example, that the proclamation of the Word should be in a language that everyone understands; otherwise it would be like laughing at the word of God,” he said. “Little things, but yes, the limit is very clear.”

“If you read the letter well and read the decree well, you will see that it is simply a constructive reordering with pastoral care, and it avoids an excess of those things that are not,” he added.

During the interview, Pope Francis addressed a wide range of topics, including the charges of financial malfeasance against Cardinal Angelo Becciu, the Vatican’s efforts to fight against corruption and clergy sexual abuse, and relations with China.

NEXT: Pope: Euthanasia legislation in Europe is sign of ‘throwaway culture’