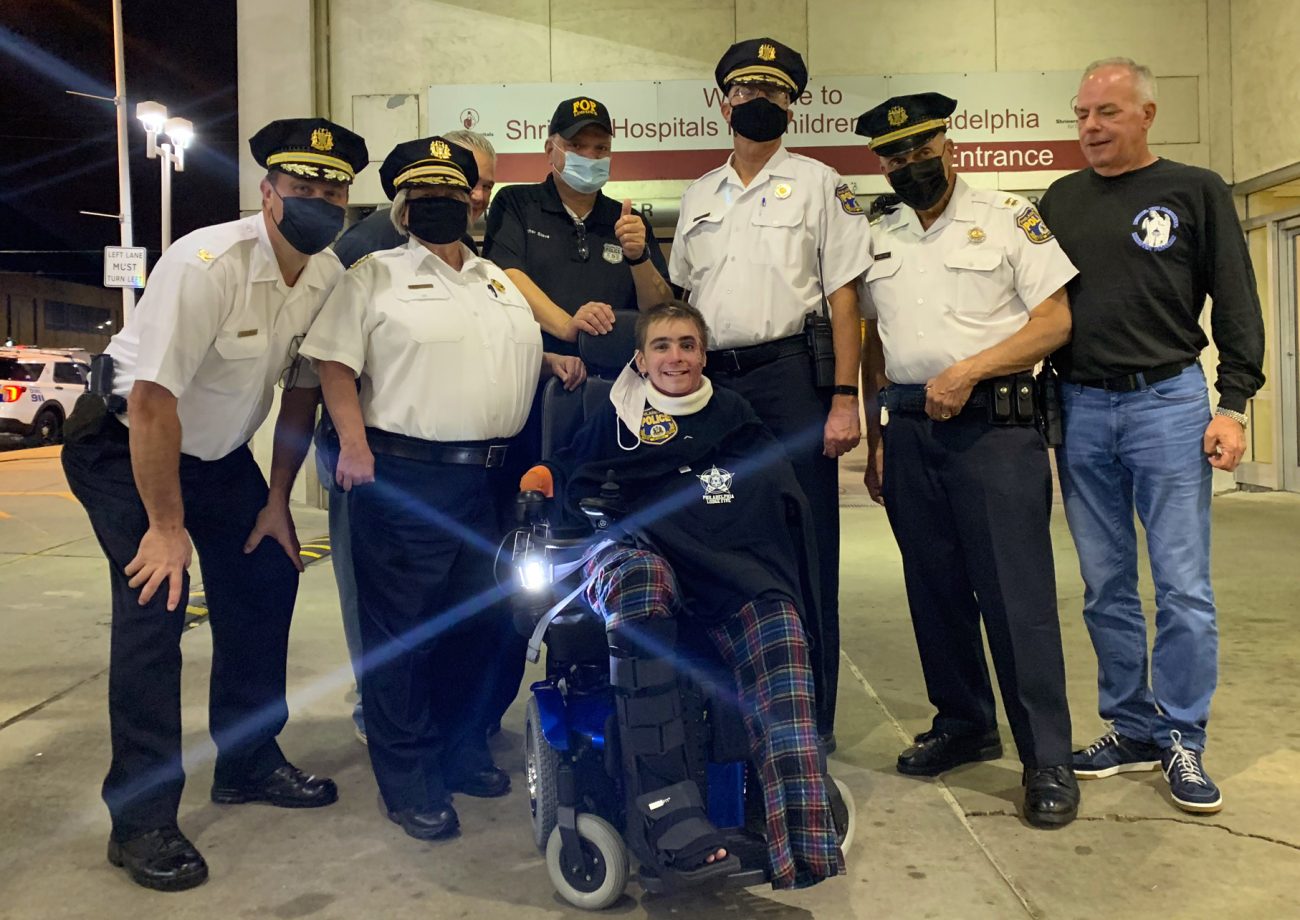 A block of Broad Street glowed this week, as the Philadelphia Police Department (PPD) and a local priest brightened the night for hospitalized children.

Some 40 PPD cars gathered before Shriner’s Hospital for Children Oct. 6 for a “Good Night Lights” salute to patients, with emergency beams flashing as a helicopter from the department’s aviation unit made several flyovers.

From the hospital’s windows, more than two dozen kids returned the officers’ waves, holding up lanterns supplied the day before by the Michael the Archangel Ministry program at the Fraternal Order of Police (FOP) Lodge 5.

Oblate Father Steven Wetzel, the program’s chaplain, coordinates the local version of the annual “Good Night Lights” initiative. Now in its fourth year here in Philadelphia, the concept originated in Rhode Island, where a Hasbro Children’s Hospital employee began flickering his bicycle light to a patient after work. Staff, area businesses and law enforcement quickly joined in, and the movement has since spread to other U.S. cities.

Wednesday’s 15-minute tribute at Shriners, scheduled to ensure there was no disruption in police coverage, was “very emotional” for both patients and law enforcement, said Father Wetzel.

“The adults are as excited as the kids,” he said. “It’s so much fun just to bring that light to these young children.”

“There’s no script,” said Sergeant Michael Cerruti, a board member of the Michael the Archangel Ministry. “The police see the kids waving to us with their flashlights, and they just get out of their cars and start waving back.”

Deputy Police Commissioner Christine Coulter described the exchange as a kid of “advanced Morse code” of the heart.

The display of police lights, normally used in times of distress, marked “one of the rare instances where it’s an urgency but not an emergency,” she said. “It’s so urgent we let them know we’re here for them. They’re not forgotten, and the Police Department cares about them.”

For Father Wetzel, the event is a natural extension of his ongoing ministry at the FOP. Named for the patron of police officers, Michael the Archangel — which Father Wetzel describes as a “multidenominational, rather than nondenominational” outreach — provides pastoral care, crisis ministry and spiritual enrichment opportunities.

Services include hospital visits, bereavement support, funeral rites and counseling to some 14,000 active and retired Philadelphia Police Department members, as well as their families.

During the “very brief moments” of Good Night Lights, “it seems as though the city pauses, and the focus is on these beautiful children,” said Father Wetzel.

Officer Ryan Graves said he was “inspired and humbled” by the experience, which affirmed his commitment to law enforcement – a career goal since childhood.

“I was that six-year-old kid who loved police officers and wanted to help others as I was once helped by an officer,” he said.

Officer Graves also enjoyed trading notes on dirt bikes with Shriners patient Austin, a motorcycle enthusiast who welcomed the chance to view the light display from the sidewalk.

While the police helicopter was a close second, the best part of the evening for him was “probably the people,” he said. “Just to be able to socialize, because when you’re in the hospital so long … to be able to go outside and talk to other people is very cool.”

“These kids are our heroes, because of everything they put up with, and everything they go through,” said Sergeant Cerruti. “And they still look forward to having us, and they open their hearts up to us.” 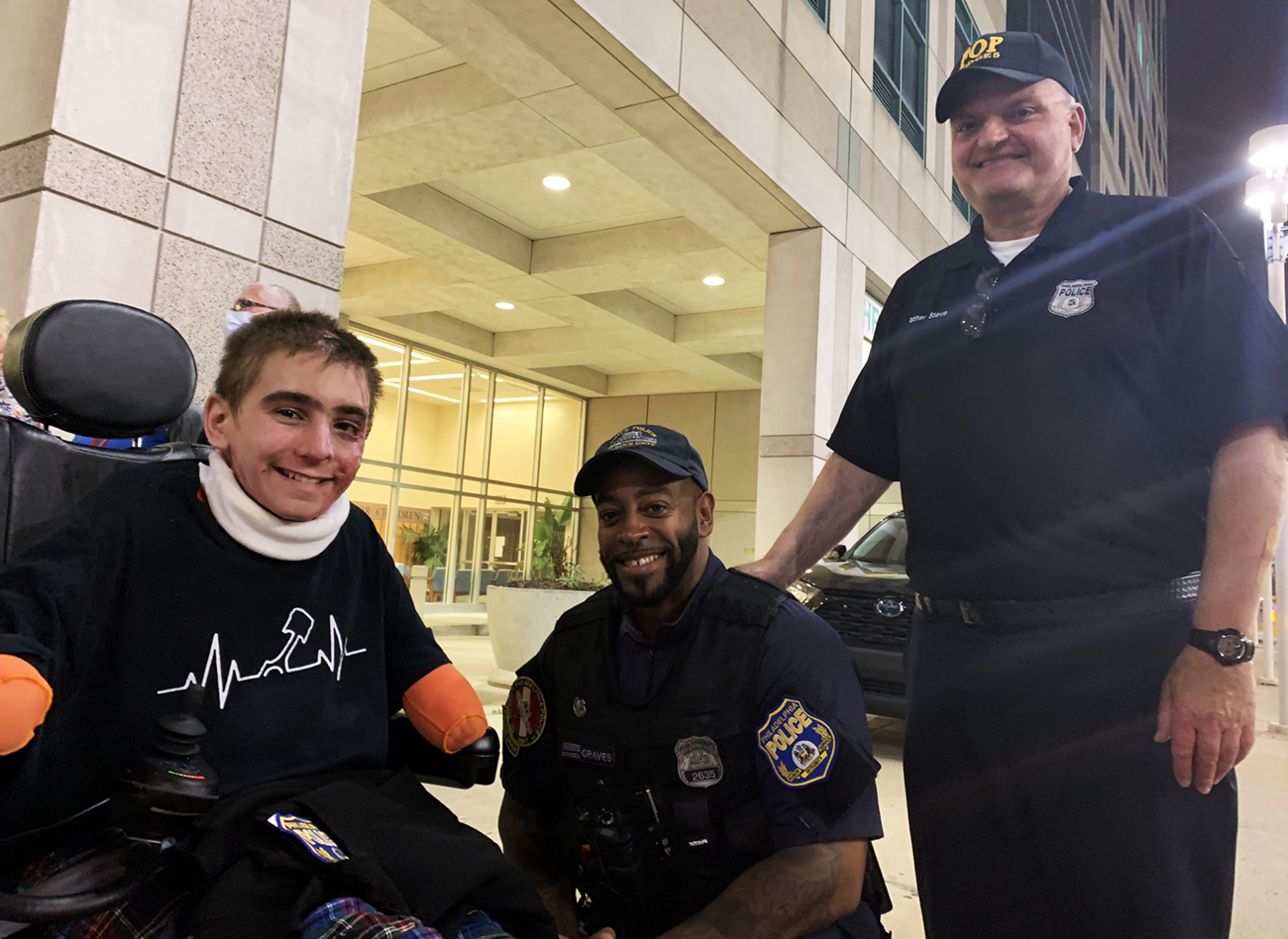 NEXT: African Mass celebrates ‘many cultures, many languages, one faith,’ says archbishop