Far and near, missionaries proclaim Christ with joy 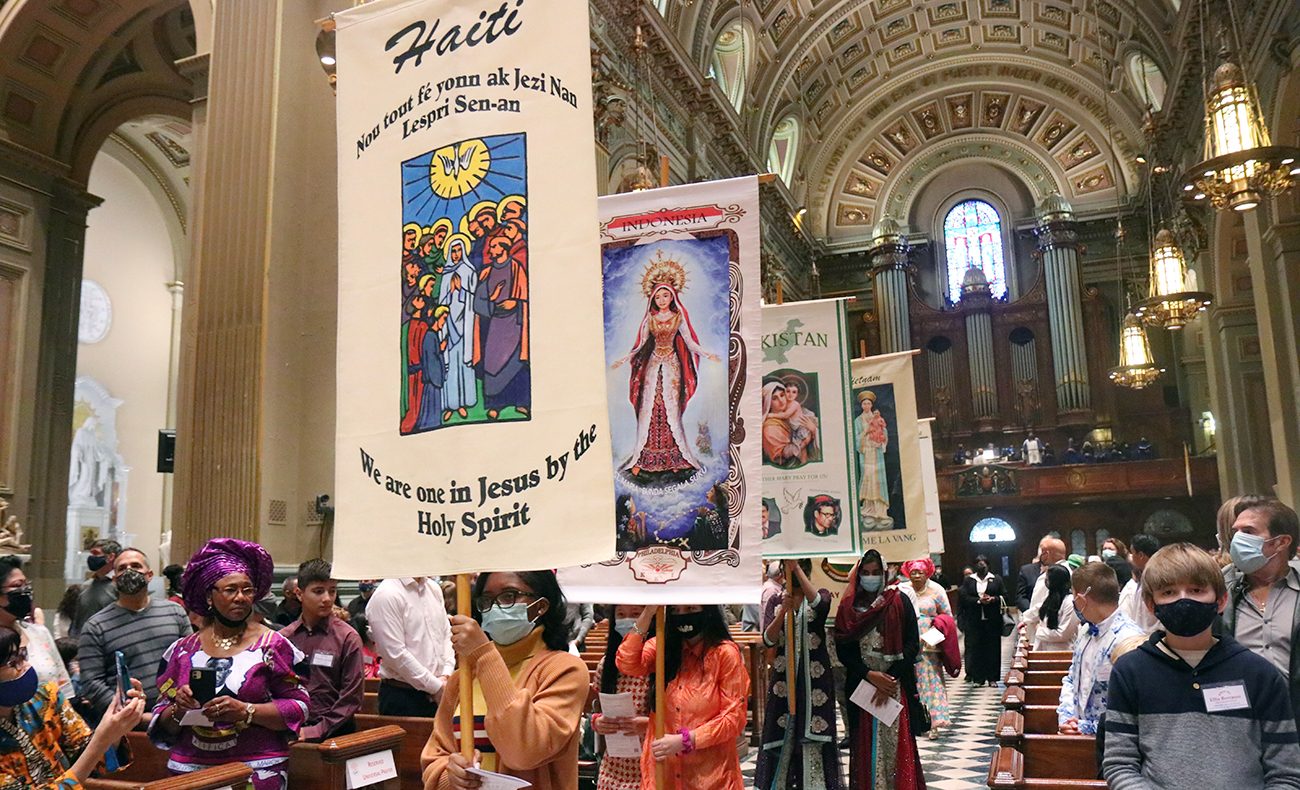 Banners representing the various cultural communities within the Philadelphia Archdiocese headed up the entrance procession of an Oct. 24 Mass on World Mission Sunday at the Cathedral Basilica of SS. Peter and Paul.

The Gospel message is spread by “passionate hearts” on “a mission to proclaim and heal,” said Archbishop Nelson Pérez.

In his homily for World Mission Sunday, the archbishop noted evangelization flows from a life-changing encounter with Jesus, the same experienced by the Apostles.

(View a photo gallery from the Mass for World Mission Sunday.)

“Many times they didn’t even know what he was about … but there was something in the gaze of his eyes, in the words from his heart, that touched them to such an extent they left things behind to follow (him),” said the archbishop, addressing some 300 on hand for the Oct. 24 Mass at the Cathedral Basilica of SS. Peter and Paul.

The Mass marked an annual observance instituted in 1926 by Pope Pius XI to encourage Catholics to prayerfully and financially support global evangelization efforts.

The liturgy was also attended by dozens of members of the Catholic Medical Association (CMA) as part of that organization’s annual White Mass, so named for the color of the laboratory coats typically worn by health care professionals.

Archbishop Pérez commended the CMA delegation as “an expression of the mission” established by Christ, who “spent a lot of time healing … in anticipation of the ultimate healing” found in eternal life.

In commissioning his followers to make disciples of all nations, Jesus “didn’t leave us alone,” said the archbishop, but instead has remained through “his word … and with the incredibly powerful, awesome presence of the Eucharist,” which has “traveled through time” as the “one constant” in the history of the church.

As a result, the Gospel message has been extended to “every single corner of the planet, (including) the most obscure places,” said the archbishop. 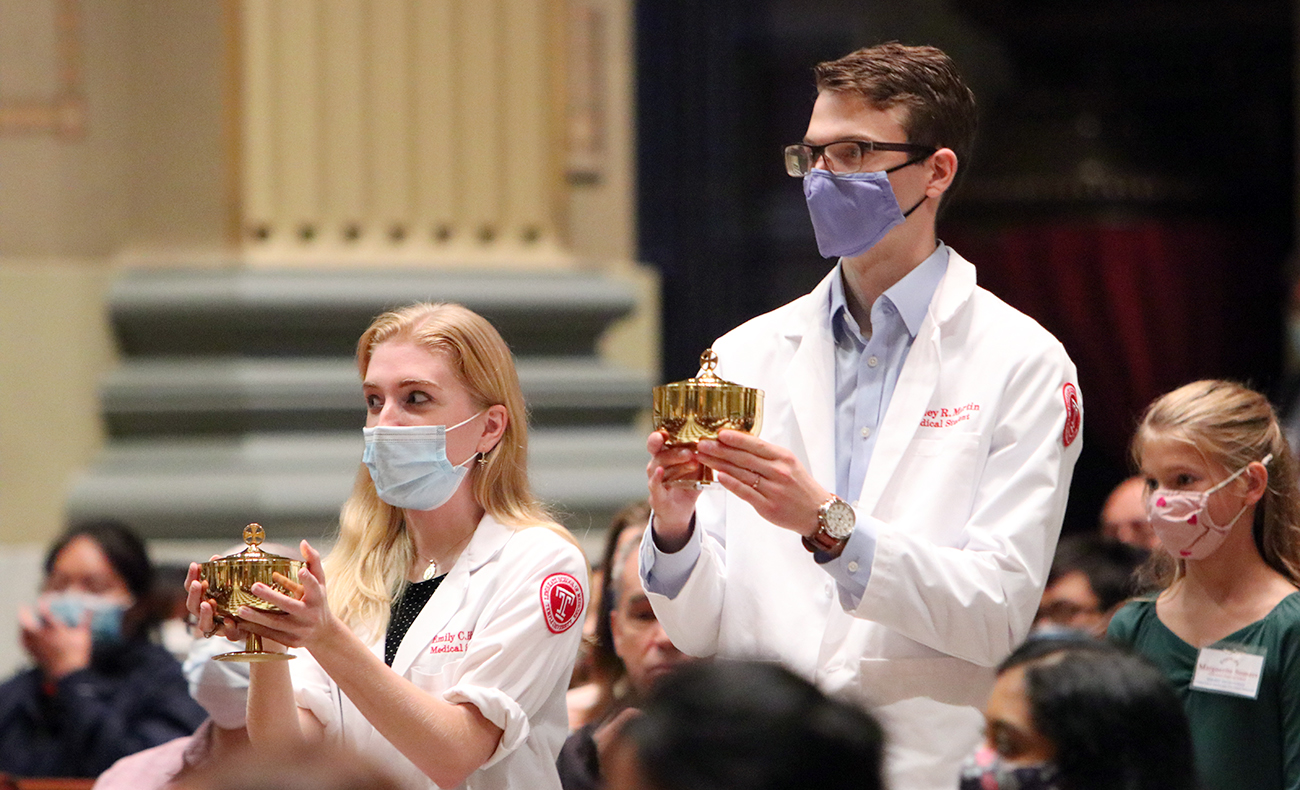 Catholic Medical Association members present the gifts during the offertory at an Oct. 24 liturgy for World Mission Sunday that also doubled as the White Mass for area medical professionals. (Sarah Webb)

A few years prior to the inaugural World Mission Sunday celebration, Pope Pius XI named four existing organizations as the Pontifical Mission Societies, which in total now aid some 1,110 mission dioceses throughout the world. The Society for the Propagation of the Faith (SPF) supports the evangelization efforts of the local church, the Missionary Childhood Association (MCA) educates children about their part in the church’s missionary outreach, the Society of St. Peter the Apostle trains the next generation of missionary clergy and consecrated religious, and the Pontifical Missionary Union focuses on forming clergy, religious and pastoral leaders more deeply in their role as evangelizers.

“Not one of us would be in the church at all, were it not for the missionary – one who has been sent, fulfilling the Lord’s great commission to go and make disciples of all the nations,” said Msgr. Beisel.

He particularly welcomed the Haitian Catholic community at the Mass, noting the liturgy was “the culmination of special (archdiocesan) efforts to send both prayerful and financial support to Haiti” following recent natural disasters and political upheaval in that nation.

“This year, we celebrated our 110th anniversary and our service to missionaries worldwide,” she said.

The archdiocese was one of the first to receive funds from SPF founder Pauline Jaricot, a French laywoman who in 1822 organized a collection for what was then the mission Diocese of Louisiana, which stretched “from the Florida Keys to Canada,” said Meiers. Jaricot is set for beatification in May 2022.

A few years prior, Sheen had created the World Mission Rosary, which links each decade to “an area where the church continues her evangelizing mission,” said Meiers.

And the task isn’t one limited to adults, she noted, as 12 winners of the annual MCA Christmas Artwork contest were honored at the Oct. 24 Mass. 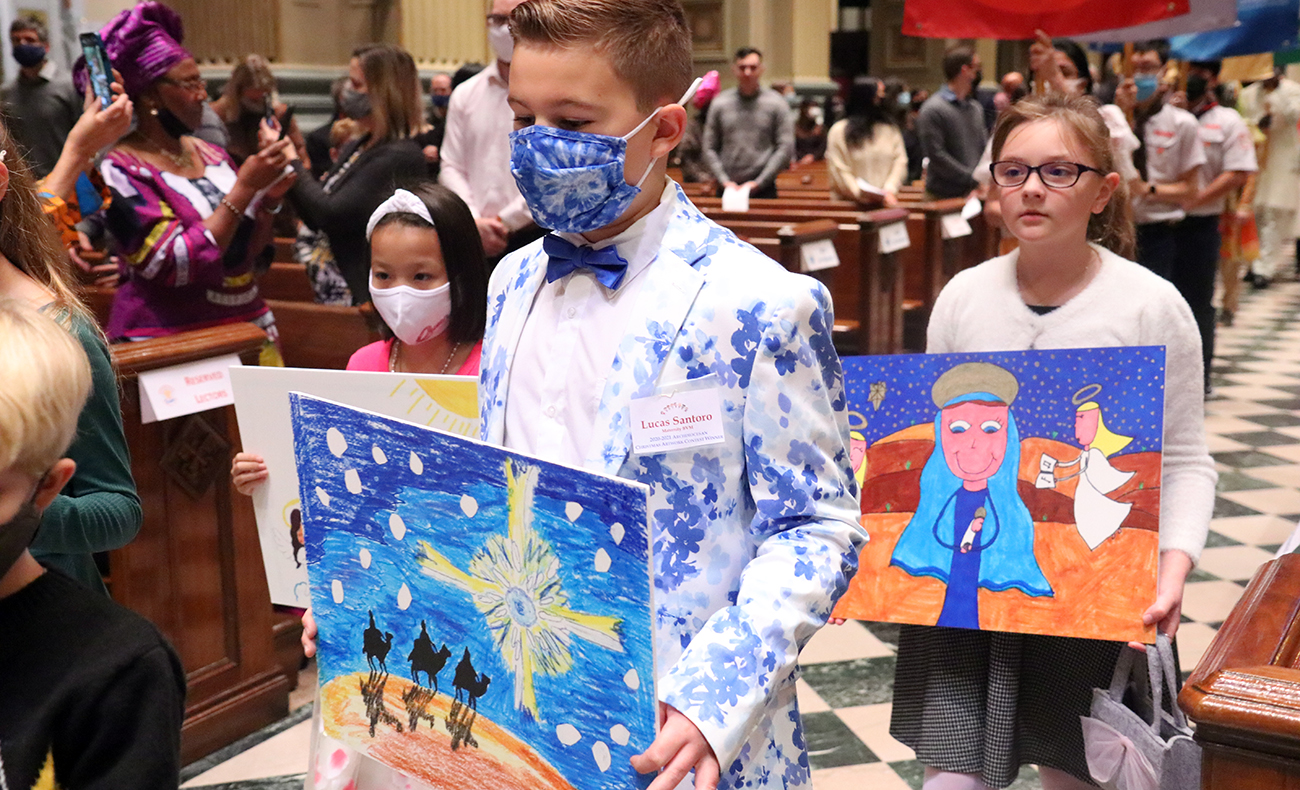 Winners of the annual Missionary Child Association Christmas Artwork Contest displayed their creations during an Oct. 24 Mass at the Cathedral Basilica of SS. Peter and Paul. (Sarah Webb)

The competition — which draws thousands of entries from elementary school age children in Catholic schools, religious education and home school programs throughout the U.S. – invites kids to illustrate a Scripturally-based aspect of Christ’s birth, such as the manger scene, the visits of the Magi and the shepherds, or the angel Gabriel.

Benjamin Robbins, an eighth-grade student at St. Teresa of Calcutta School in Schwenksville, was one of 24 national contest winners, and his depiction of the angel Gabriel will be displayed at the Basilica of the National Shrine of the Immaculate Conception in Washington, D.C. during the Advent and Christmas seasons.

Last year, the MCA – which raises funds to build schools, implement medical and nutritional programs, and expand access to educational resources – posted the winning designs on its website, making them available as free digital greeting cards.

The artwork underscored this year’s theme for World Mission Sunday, “Proclaim It with Joy” – and the missionary field is a limitless one, said several participants at the Oct. 24 liturgy.

“The guiding force is love, and seeing Jesus in everybody that we see,” said Dr. Ferrol Lee, a CMA member who along with his wife Dr. Rachel Lee traveled from upstate Pennsylvania to attend the Mass and the CMA’s reception and talk afterwards.

“That includes all of our patients and coworkers,” said Dr. Rachel Lee.

Dr. Lester Ruppersberger, president of the CMA’s Philadelphia-based St. John Neumann Guild, said his organization enables Catholic medical professionals to draw on their faith in “(practicing) medicine and being of value in the mission of healing.”

“We are missionaries even among our families, and in our places of work,” said Elizabeth Okafor, a member of the Nigerian Catholic community at St. Cyprian Parish in Philadelphia.  “Everywhere you are, you are a missionary.”

Archbishop Pérez said Christ’s call to build the kingdom of God “continues in us,” as the Mass itself makes clear.

“Every time we come to the Eucharist, we’re standing back on that mountain with Christ” prior to the Ascension, he said. “We hear that word to ‘go and proclaim this good news to all the nations. That’s for you and for me … It means go and share the Presence you have celebrated.”

PREVIOUS: Superintendent of Catholic high schools to step down Nov. 5