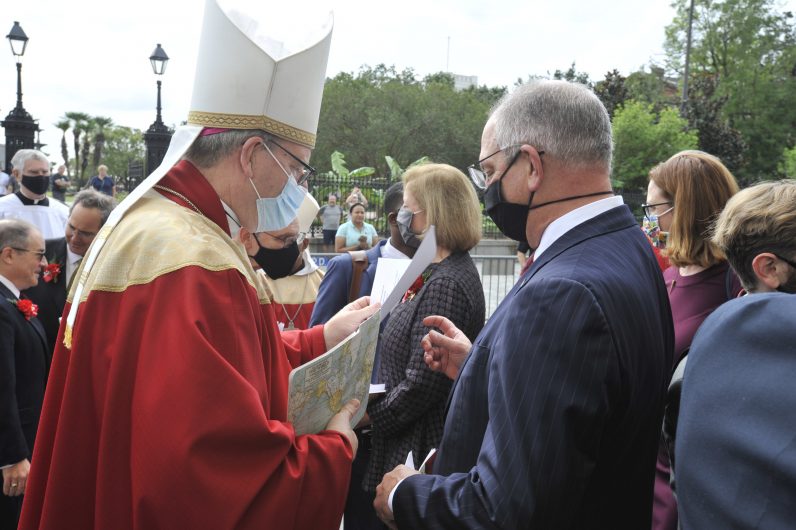 NEW ORLEANS (CNS) — With tensions rising over the proper role of religion in society, the broader culture appears to be compartmentalizing religious faith and moral thinking into something akin to “a hobby,” said Los Angeles Auxiliary Bishop Robert E. Barron Oct. 4.

He made the comments in his homily at St. Louis Cathedral at the Red Mass of the Archdiocese of New Orleans, which drew judges, lawyers and politicians.

“Today, it seems to me the far greater threat is coming from the side of an ideological secularism that would like to shuffle religion off the playing field altogether or, at the very least, to confine it to the realm of privacy so that it would function as a kind of hobby,” said Bishop Barron, founder of Word on Fire Catholic Ministries.

If religious principles were relegated to an afterthought, Bishop Barron said, “then our society loses its soul, our laws lose their rootedness in the moral and spiritual law and our democracy loses its cohesiveness.”

“I would say that resistance to this sort of secularizing attack on religion should be of paramount importance for Catholics within the legal and political establishment,” he added.

Bishop Barron traced the relationship between religion and the law by drawing on the Book of Genesis, which states that God created all finite things, “identifying them as creatures of the one God,” and not as gods in themselves, as is seen in other ancient religions.

“Identifying them as creatures of the one God, the author of Genesis is knocking them off a pedestal,” he said. “But, at the same time and in the same measure, he’s establishing that they have their own integrity. The secular space is opened up by God in the very act of creation.” 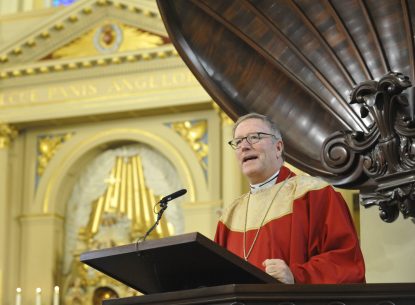 Contrary to the thinking that Israel was a theocracy, Bishop Barron said its rulers were “not prophets and priests.”

“There’s a kingly palace and a priestly temple — and they’re not the same,” he said. “There are two separate realms. At the same time, (the king’s) work is always done under God, that is to say, in accord with the divine law, which judges him personally and his decisions.

“Hence, in the biblical interpretation, political rulers, precisely because they are not divine figures and yet under God’s authority, can and should be criticized.”

Even King David, the greatest of Israel’s rulers, was branded in the Bible “as an adulterer and a murderer,” he said.

“But, mind you, even as they harshly chastise them, the prophets don’t question the legitimate authority of kings, nor do they try to eliminate the office of king,” Bishop Barron said. “In short, we see the Bible is inviting us into this creative tension between nature and grace or between the sacred and the secular or between the church and state, to use our terms.”

Bishop Barron said a second-century letter to Diognetus tries to explain the unusual role early Christians played in politics and the broader society, saying “they dwell in their own fatherlands but as if sojourners in them.”

“This detachment is born of the profound conviction that they have,” Bishop Barron said. “Ultimately, as Paul puts it, their citizenship is in heaven. … It’s because Christians do not see any one set of political arrangements as following inevitably from their faith that they can live happily enough in a variety of political and cultural settings.”

Bishop Barron said the fear of 19th-century philosopher and historian Alexis de Tocqueville that American democracy could be bedeviled by “rampant individualism” has become an issue of serious concern.

“Tocqueville saw in the rhetoric of Jefferson and the other founders a preference for the freedom of the individual to pursue happiness as he or she saw fit without any particular direction given from civil authorities,” Bishop Barron said. “The danger, as Tocqueville saw it, was the opening up of a civic space utterly denuded of moral or spiritual purpose, an arena in which individuals simply sought their own fundamentally materialistic ends.

“The needful thing, (Tocqueville) concluded, is a vibrant religious culture that operates outside of the direct control of the state but throughout the civil society … as the soul of the nation. Pulpits, religious organizations, parishes, religious publishing houses, evangelistic enterprises all would provide a moral and spiritual ballast to what otherwise would be a purely secular space. … I wonder if any of that sounds familiar?”

Bishop Barron also drew on the 13th-century writings of St. Thomas Aquinas, who taught that all positive laws are the prerogative of the “properly constituted civil authority,” but to be legitimate, they must be rooted “in the natural law, which is to say, that a set of moral prescriptions — for example, to foster life, foster community, foster knowledge and art, foster religion — are convictions that are discernible as objective values.”

He said the Rev. Martin Luther King explicitly drew on Aquinas’ thinking by declaring that the “Jim Crow laws of his time were unjust precisely in the measure that they did not embody the principles of the natural, moral law.”

“Finally, argues Aquinas, moral law is grounded in the eternal law, which is identical to God’s rational purpose for the world,” he said. “Thus, a supposedly moral law that stands in contradiction to the intentions of God would be revealed, ipso facto, as fraudulent.”

After Mass, Gov. Edwards greeted Bishop Barron outside the cathedral and thanked him for his message.

Bishop Barron replied by thanking Edwards, a pro-life Democrat, for his official actions: In 2019, Edwards signed a state law that prohibited abortion if a fetal heartbeat was detected.

The governor then asked Bishop Barron for a copy of his homily.

NEXT: U.S. nuncio says he’ll stay on, will prep for synod, Biden-pope meeting