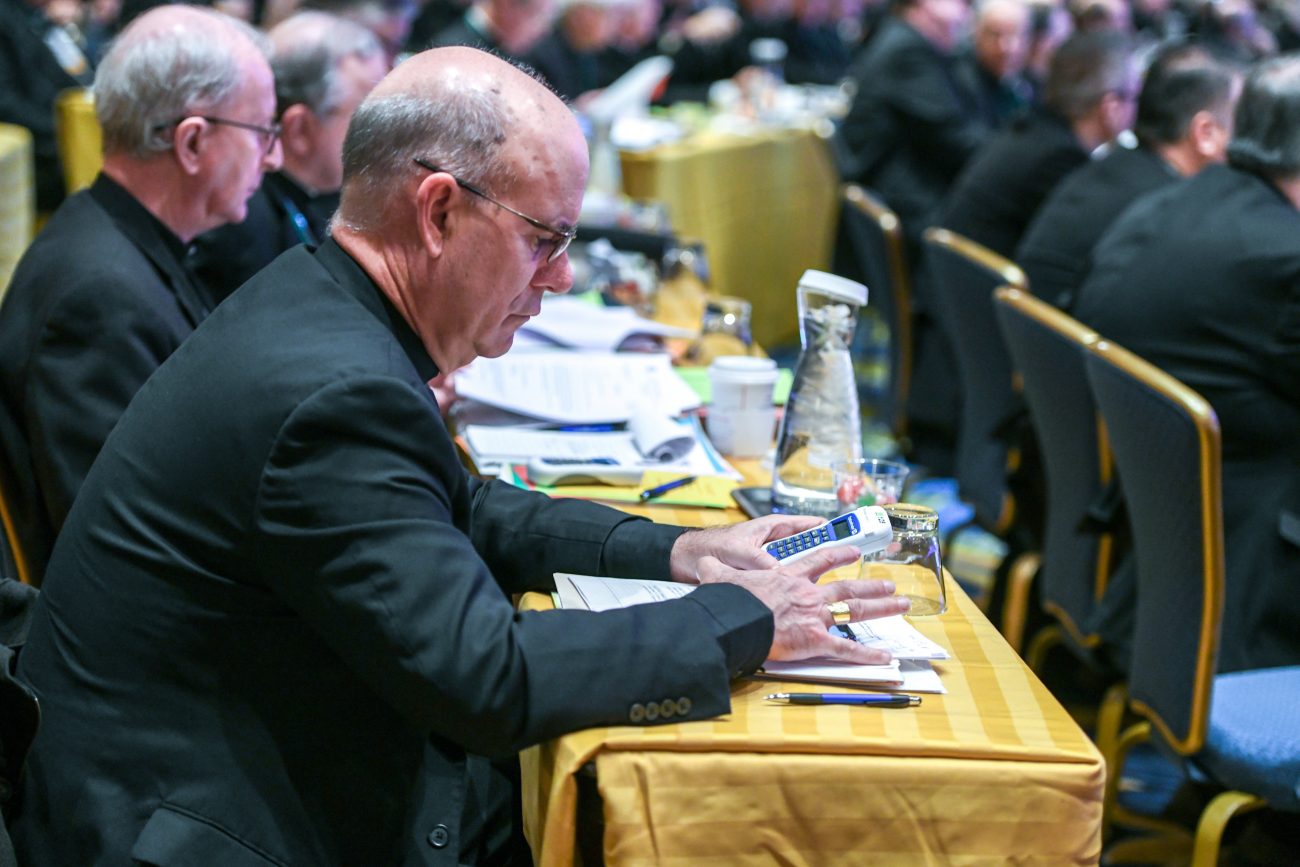 WASHINGTON (CNS) — When the U.S. bishops gather for their fall assembly in Baltimore Nov. 15-18, it will be the first in-person meeting of the full body of bishops since November 2019.

The COVID-19 pandemic forced the cancellation of the bishops’ June 2020 spring meeting, and their November 2020 fall assembly and June 2021 spring meeting were both held in a virtual format.

Topping the meeting’s agenda with be debate and votes on a proposed document on the Eucharist, “The Mystery of the Eucharist in the Life of the Church,” and on a eucharistic revival initiative.

During their spring meeting this past June, 75% of the U.S. bishops approved the drafting of a document, addressed to all Catholic faithful, on eucharistic coherence.

Part of the impetus for the bishops’ work on this document and a eucharistic revival to increase Catholics’ understanding and awareness of the Eucharist was a Pew study in the fall of 2019 that showed just 30% of Catholics “have what we might call a proper understanding of Christ’s presence in the Eucharist.”

The eucharistic revival would launch on the feast of Corpus Christi in June 2022. The three-year effort will include events on the diocesan level such as eucharistic processions around the country along with adoration and prayer.

In 2023, the emphasis will be on parishes with resources available at the parish level to increase Catholics’ understanding of what the Eucharist really means. This would culminate in a National Eucharistic Congress in the summer of 2024.

The Baltimore assembly of the U.S. Conference of Catholic Bishops will begin with an address by Archbishop Christophe Pierre, papal nuncio to the United States.

The bishops also will hear from Archbishop José H. Gomez of Los Angeles, president of the USCCB.

The agenda also includes a report to the bishops from the National Advisory Council, a group created by the USCCB that is comprised of religious and laypeople primarily for consultation on action items and information reports presented to the bishops’ Administrative Committee.

Other action items on the agenda requiring debate and a vote will be an update of the “Socially Responsible Investment Guidelines”; a proposal to add St. Teresa of Kolkata to the “Proper Calendar for the Dioceses of the United States” as an optional memorial Sept. 5; a resolution on diocesan financial reporting; new English and Spanish versions of the Order of Christian Initiation of Adults; a translation of “Holy Communion and Worship of the Eucharistic Mystery Outside Mass”; “National Statutes for the Catechumenate” in English and Spanish; and the USCCB’s 2022 budget.

During the assembly, the bishops also will vote for a treasurer-elect for the USCCB, as well as chairmen-elect of five standing committees: Clergy, Consecrated Life and Vocations; Divine Worship; Domestic Justice and Human Development; Laity, Marriage, Family Life and Youth; and Migration.

The bishops elected will serve for one year as “elect” before beginning their three-year terms in their respective posts at the conclusion of the 2022 fall general assembly.

There also will be voting for board members for Catholic Relief Services, the U.S. bishops’ overseas relief and development agency, and the election of a new USCCB general secretary.

Father Michael J.K. Fuller, who was an associate general secretary, is currently interim general secretary. Archbishop Gomez named him to the post in July when Msgr. Jeffrey D. Burrill resigned.

Also scheduled to take place will be a consultation of the bishops on the sainthood causes of Charlene Marie Richard and Auguste Robert “Nonco” Pelafigue.

Both have the title of “Servant of God” and were from the Diocese of Lafayette Louisiana, where Bishop J. Douglas Deshotel has officially opened their sainthood causes.

Charlene, a young Cajun girl who died of leukemia in 1959 at age 12, is regarded by many in south Louisiana and beyond as a saint, saying her intercession has resulted in miracles in their lives. She is known as “The little Cajun saint.”

Pelafigue was born in France and from the time he was almost 2 years old, he lived in Arnaudville, Louisiana. He died on the feast of the Sacred Heart of Jesus June 6, 1977. He is known for his decades of ministry in the League of Sacred Heart, Apostleship of Prayer — which is now called the Pope’s Worldwide Prayer Network.

The 2007 Vatican document “Sanctorum Mater” requires the diocesan bishop promoting a sainthood cause to consult with the body of bishops on the advisability of pursuing the cause.

Other items to be presented and discussed at the bishops’ assembly include:

— The 50th anniversary of the Catholic Campaign for Human Development, the U.S. bishops’ domestic anti-poverty program.

— The “Journeying Together” process of intercultural dialogue and encounter “focused on the church’s ministry with youth and young adults that fosters understanding and trust within and across cultural families toward a more welcoming and just community of faith.”

— The application and implementation of the ” Pastoral Framework for Marriage and Family Life Ministry in the United States: Called to the Joy of Love.” At their June assembly, the U.S. bishops approved a draft document that provides a pastoral framework meant to strengthen marriage and family ministry in parishes and dioceses.

— The “Walking with Moms in Need” initiative of the USCCB Committee on Pro-Life Activities that asks every diocese and parish to help mothers experiencing a difficult pregnancy find services and resources or provide these when they see gaps in such services.

Public sessions of general assembly discussions and votes will be livestreamed at www.usccb.org/meetings. News updates, vote totals, texts of addresses, and presentations and other materials will be posted to this page.

NEXT: Coronavirus among factors spurring migrants to U.S.-Mexico border