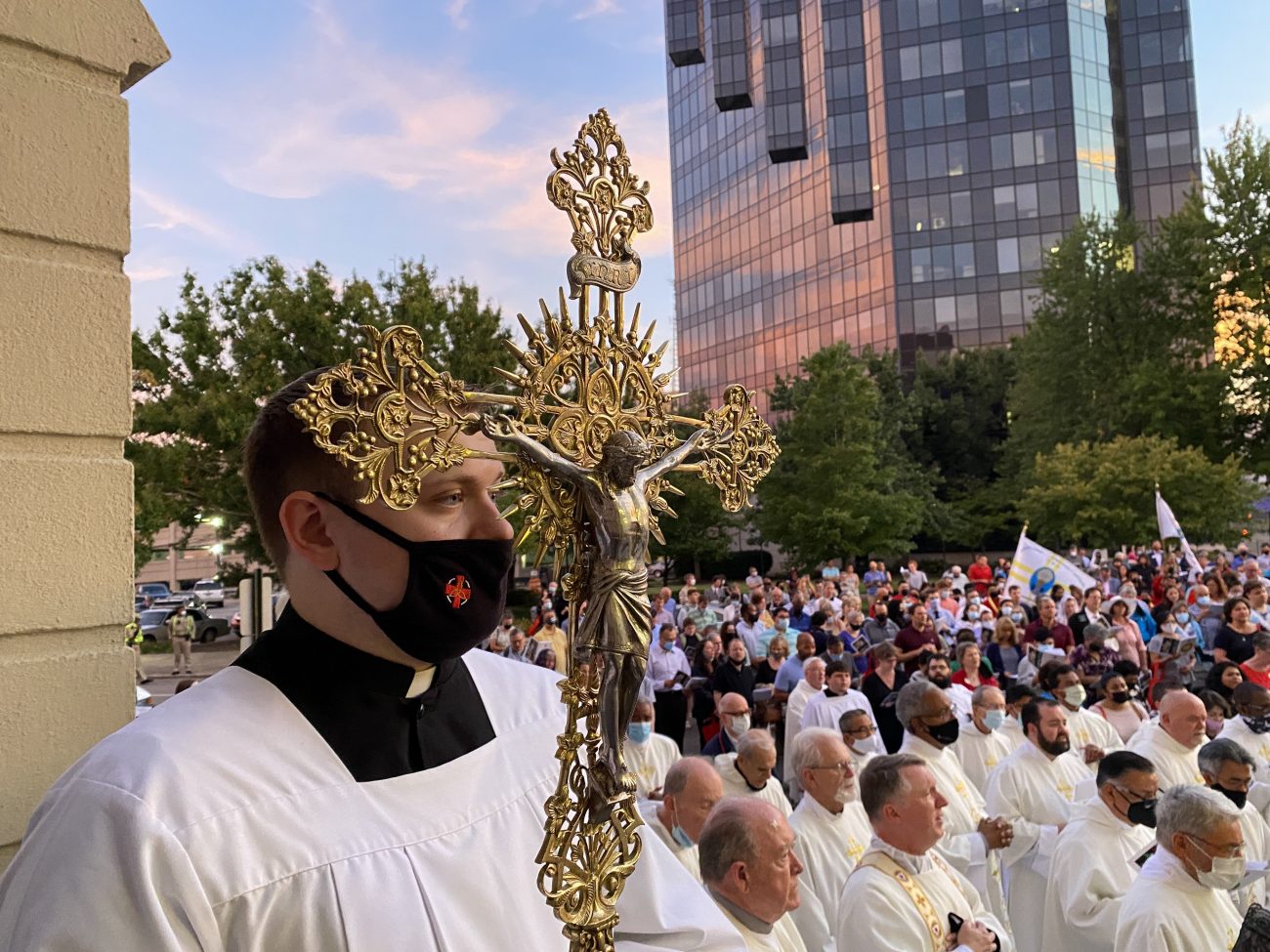 WASHINGTON (CNS) — This past June at their annual meeting, the U.S. bishops spoke about helping Catholics come to a deeper understanding and appreciation for the Eucharist through an upcoming eucharistic revival and a document on the Eucharist.

The bishops plan to continue talking about these church actions and will vote on the Communion document during their November meeting in Baltimore.

But in the meantime, two U.S. bishops — who head the committees working on these initiatives — spoke recently on a recorded video roundtable produced by the U.S. Conference of Catholic Bishops to further explain just what the bishops hope to achieve through the upcoming revival and document on the Eucharist.

Santos told Catholic News Service Oct. 12 that it was important for the bishops to give an “official voice” on what these initiatives are, and what they are not, during this “significant moment for the church in the United States.”

The eucharistic revival is meant to be an act of evangelization for some and a reawakening of understanding for others, she said, while the document on the Eucharist, which has gained more public attention, is meant to be more of a “teaching tool to be incorporated into” the planned revival.

In the roundtable discussion, Bishop Cozzens said the impetus for the bishops’ work on a eucharistic revival was a Pew study in the fall of 2019 that showed just 30% of Catholics “have what we might call a proper understanding of Christ’s presence in the Eucharist.”

The bishops saw this as an opportunity to increase Catholics’ understanding and awareness of the Eucharist with a revival that is set to launch on the feast of Corpus Christi in June 2022.

Bishop Cozzens said what will be a three-year process will include events on the diocesan level such as eucharistic processions around the country along with adoration and prayer.

In 2023, the emphasis will be on parishes with resources available at the parish level to increase Catholics’ understanding of what the Eucharist really means.

Ultimately, the revival will end with a National Eucharistic Congress in the summer of 2024 and possibly other gatherings like this in the future.

The Minnesota bishop said this spotlight on the Eucharist will emphasize that it is such a great gift to the church.

He also said the focus of this revival will not just be for parish priests to run another program but for Catholic groups and movements to be involved in reaching out and explaining the meaning of the Eucharist to Catholics.

Bishop Rhoades said he was excited about this revival and feels the document that his committee will present to the bishops this fall, “The Mystery of the Eucharist in the Life of the Church,” will be a good contribution to it.

He said the document will focus on how “the Eucharist is our greatest treasure as Catholics” and will look at different aspects of the Eucharist, particularly how it illustrates Christ’s sacrifice and is the real presence of Jesus, not just a symbol.

The second half of the document will emphasize what Catholics should do with this deeper understanding and appreciation of the Eucharist from more active participation at Mass to participating in devotions such as adoration and then renewing their commitment to serve others.

When asked how the two initiatives fit together, Bishop Cozzens said he thought the document on the Eucharist would “become a sort of launching pad for the revival.”

He urged Catholics to really pray for this eucharistic revival, recognizing that “what ultimately is going to change the world is the Holy Spirit.” Bishop Rhoades similarly encouraged people to pray for the revival and then to participate in any way they can and spread the word about it.

“Evangelize. Be evangelizers of the Eucharist,” he said.

NEXT: Prominent Anglican bishop who served in U.S. received into Catholic Church