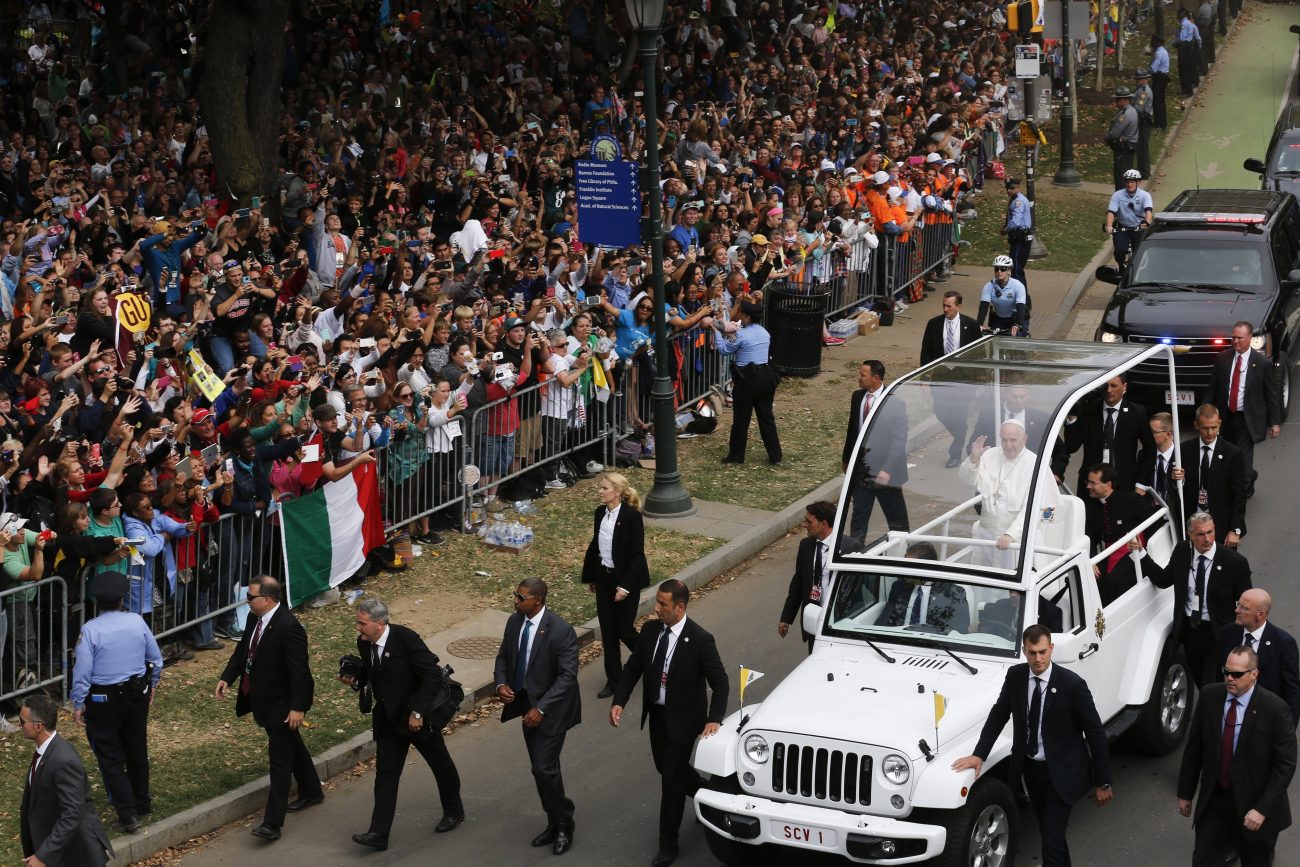 Pope Francis arrives in the popemobile for the closing Mass of the World Meeting of Families in Philadelphia Sept. 27, 2015. (CNS photo/Bob Roller)

WASHINGTON (CNS) — The percentage of Catholic Americans who viewed Pope Francis favorably in September differs little, if at all, from the results of a similar poll conducted in March.

The Pew Research Center reported Oct. 7 that 83% of U.S. Catholics view the pope favorably, up one percentage point from a Pew poll taken in March.

The same 83% figure holds among Catholics who say they go to Mass weekly. Lower percentages were reported among those who go to Mass seldom or never (80%) and Catholics who identify as Republican or lean toward the GOP (71%).

However, Pope Francis’ favorability numbers rose from March to September among those who go to Mass on a monthly to yearly basis (now at 86%) and among Catholics who identify as, or lean, Democratic (now 91%).

As for the controversy over the pope’s decision to restore limits on the use of the so-called Tridentine-rite Mass — also known as the “extraordinary form” — U.S. Catholics responded with a collective shrug. Sixty-five percent — nearly two-thirds of those polled — said they had not even heard of the controversy.

Among various Catholic subgroups, only the weekly Massgoers — the only subgroup where more than half reported having heard of Pope Francis’ actions — Catholics under age 50 and Republicans where a plurality registered of disapproval over the new restrictions.

But for more Catholic subgroups — those attending Mass, monthly to yearly, those who go to Mass seldom or never, Catholics over age 50, and those who are Democrats — the prevailing opinion was “no opinion.” The same held true for U.S. Catholics overall.

Catholics also were asked in the poll whether Pope Francis had certain attributes. Pew also broke down the responses by political leaning.

Compared to Catholics, U.S. adults in general have a lower favorability assessment of Pope Francis. Since Pew’s first poll on the subject in March 2013, when he was elected to the papacy, the pope was viewed favorably by 57% of all Americans, peaking at 70% in February 2015 and February 2017. He dipped to 51% in a 2018 survey.

Since Pew moved to online polling in February 2020, Americans’ favorable view of Pope Francis has slipped from 64% in February 2020 to 63% last March to 60% in the latest poll.

U.S. Catholics’ view of the pontiff started off in March 2013 at 84% — just one percentage point difference between then and the September poll. His favorability among Catholics likewise peaked in February 2015 at 90%, and reached its lowest point in 2018 at 72%. Pew’s three online polls have Pope Francis’ favorability at 82%, 82% and 83%.

Unfavorable views of the pope have crept upward during the eight years of his pontificate. Among all Americans, that rate has doubled from 14% in March 2013 to 28% in September. Among U.S. Catholics, though, the unfavorable views have nearly tripled in that time, from 5% in March 2013 to 14% — the same rate for all Americans when Pope Francis began his pontificate — in September.

NEXT: Church must move from ‘maintenance’ to ‘mission,’ bishop says