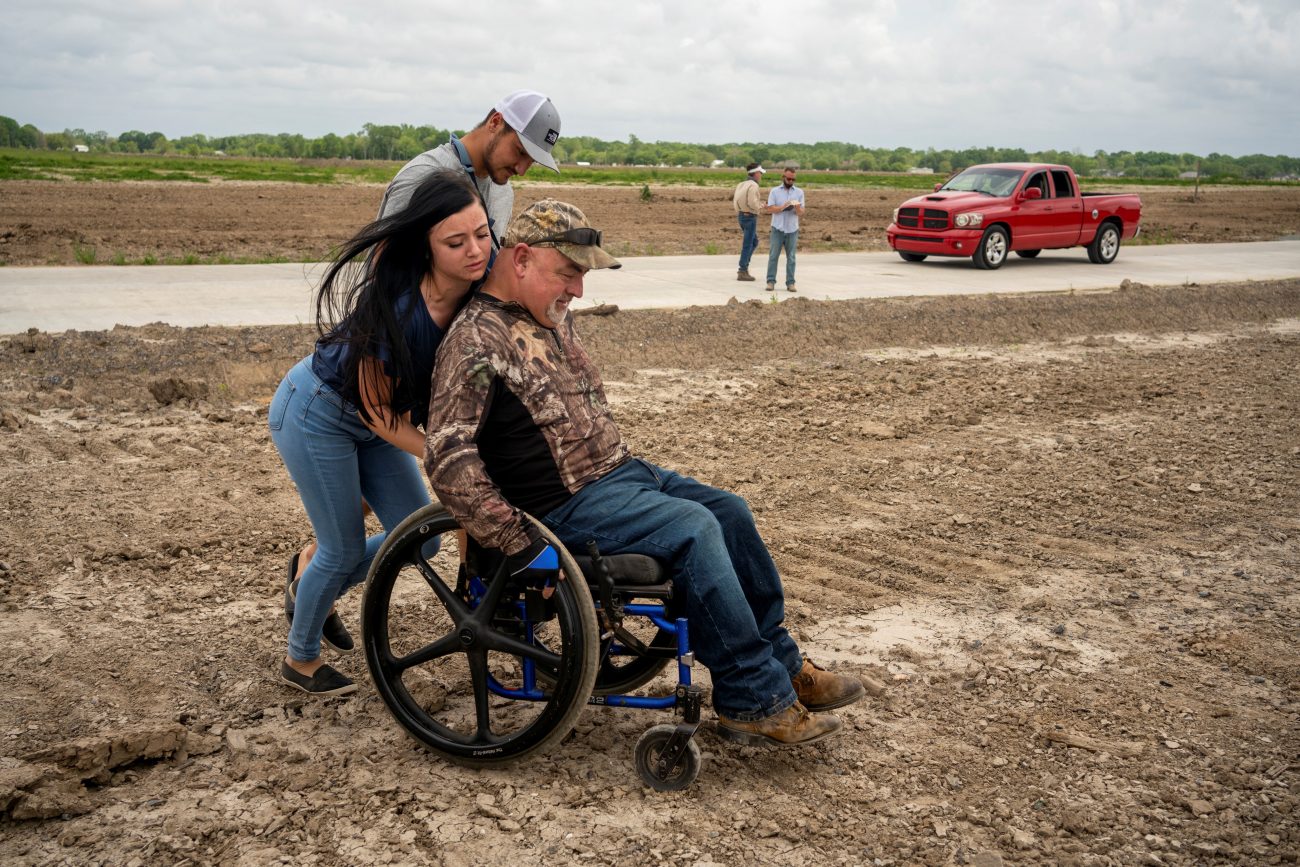 Juliette Brunet pushes her uncle Chris Brunet, both members of the Biloxi-Chitimacha-Choctaw tribe and residents of Isle de Jean Charles, La., as they visit a subdivision April 7, 2021, under construction for the resettlement of the tribe near Shriever, La. The tribe, which has lived in Isle de Jean Charles for nearly 200 years, is being resettled to a new location because of climate change. (CNS photo/Kathleen Flynn, Reuters)

WASHINGTON (CNS) — Much of the world has been awaiting what President Joe Biden might say about climate change at the Glasgow, Scotland, summit, or whether he and Pope Francis would discuss migration when the two meet at the Vatican.

But they might have missed what the White House has already said in October about both climate change and migration — and how one affects the other.

Joan Rosenhauer, executive director of Jesuit Refugee Service USA, has noticed, and likes much of what she sees.

“The most impactful part for me was that the administration was putting so much emphasis on climate change and displacement. Because it has just not gotten enough attention anywhere,” said Rosenhauer of the White House’s 37-page paper “Report on the Impact of Climate Change on Migration.”

“There will be a lot of work to be done to carry out some of the key elements of the report. I was pleased to see the suggestion that an effort has to be made to find ways to include climate-related causes of displacement in consideration for refugee status,” Rosenhauer told Catholic News Service in an Oct. 25 phone interview.

“That is going to take work, and a process, and the devil is in the details, but I was very pleased to see that element of the report included.”

“Given the growing trend in displacement related to climate change, expanding access to protection will be vital,” said the White House report, released Oct. 21.

“The United States will need to strengthen the application of existing protection frameworks, adjust U.S. protection mechanisms to better accommodate people fleeing the impacts of climate change, and evaluate the need for additional legal protections for those who have no alternative but to migrate,” it said.

“The very connection between climate change and displacement is a new focus for this administration, certainly, over the previous administration. So that’s one thing they’re more cognizant of,” Rosenhauer said.

“The focus on urban areas — one of the key impacts of changes in weather patterns is that rural areas suffer, people who make their living in agriculture suffer, and that often leads them to abandon their farms and go into the cities to find a new way to make a living to support their families in the cities, and puts pressure on the urban areas to accommodate the new population,” she added, “so I thought that was helpful.”

The White House report said, “The current migration situation extending from the U.S.-Mexico border into Central America presents an opportunity for the United States to model good practice and discuss openly managing migration humanely, highlight the role of climate change in migration, and collaborate with other governments to address these challenges,” while noting also a “lack of bipartisan agreement” on how to address the issue.

Given the divided nature of Congress, Rosenhauer suggested a couple of recommendations in the report that representatives of both major political parties can find agreement.

“One is focusing on the need to track this more fully. That seems to be a more accessible idea for most people; hopefully that will be acceptable,” she said. “And the discussion of urban areas people on both sides of the aisle recognize as a need: patterns of migration into urban areas throughout the world.”

According to the report, “In Central America, particularly El Salvador, Guatemala and Honduras, climate change disproportionately affects populations in vulnerable situations and can contribute to the decision to migrate.”

While readers of the White House report may focus on migration into the United States by people crossing the Mexico-U.S. border, it looks at several spots on the globe where climate change is forcing uncomfortable stay-or-go choices.

JRS, being present around the world, is no stranger to many of these spots. The agency’s mission is to accompany, serve and advocate on behalf of refugees and other forcibly displaced persons.

“One of the places that stands out is Syria, where a drought helped exacerbate tensions and challenges for people that preceded the conflict,” Rosenhauer told CNS. “That is often the case. Climate change, challenging weather patterns create stresses and tensions that lead to conflict. We have seen Syrian refugees throughout the Middle East, and it is such a problem.”

Technology may be an aid in ameliorating at least some aspects of the migration conundrum, according to the report: “Space-based information can contribute to assessments of the vulnerability of communities to climate change and can help monitor the effectiveness of adaptation strategies.”