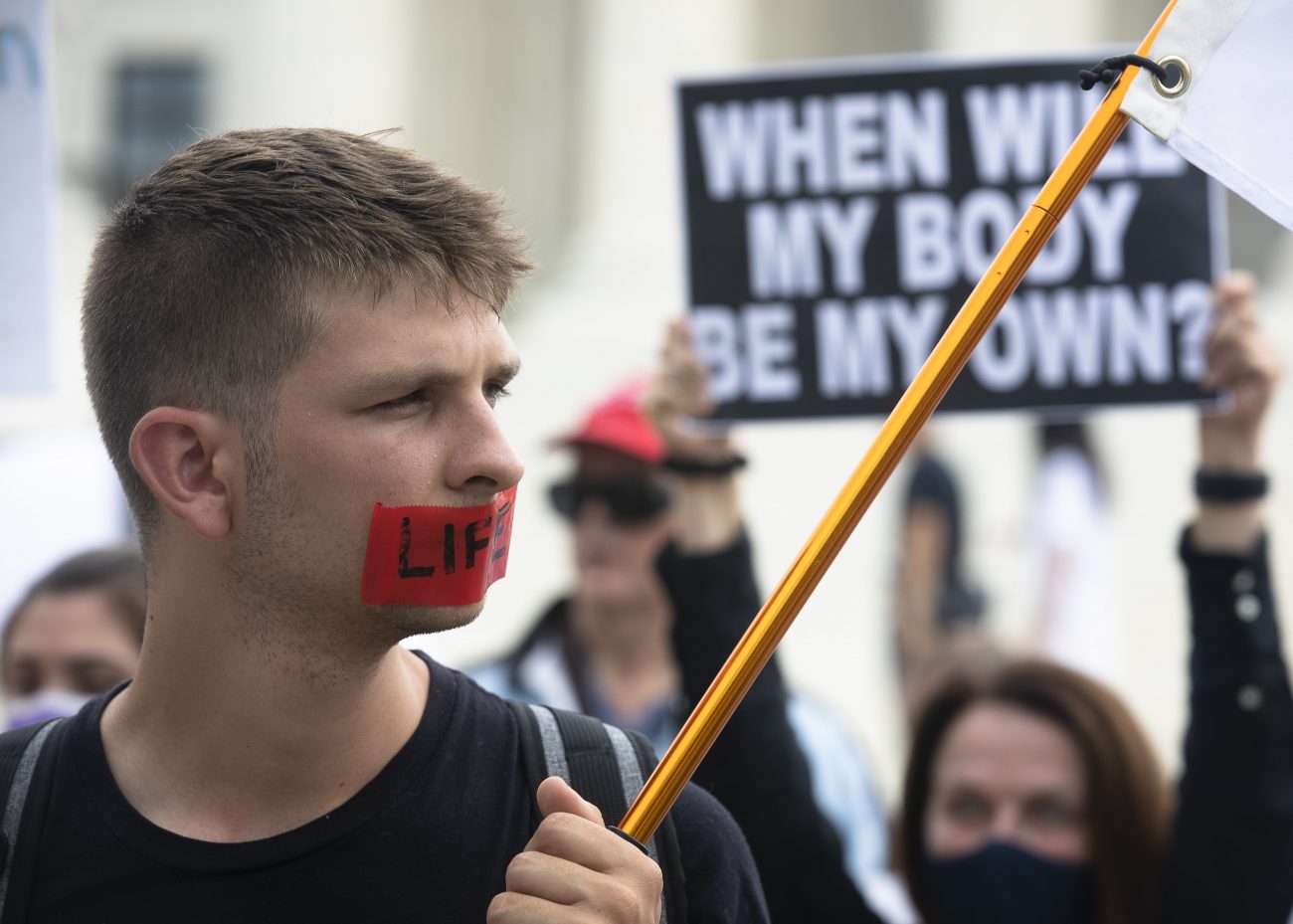 Pro-life advocates and supporters of legal abortion are seen near the U.S. Supreme Court building in Washington Oct. 4, 2021, the first day of the high court's new term. (CNS photo/Tyler Orsburn)

WASHINGTON (CNS) –The Supreme Court said Oct. 22 that the Texas abortion law banning abortions after six weeks of pregnancy will remain in effect but that the court will give an expedited review of the law Nov. 1.

The brief order said the court will specifically examine the way the state’s abortion law was crafted and how it is enforced. The law allows individuals to sue anyone involved in helping a woman obtain an abortion. It also said it would review if the Department of Justice can challenge this law in court.

Justice Sonia Sotomayor, the only justice to file a dissent, said she disagreed with the court for not blocking the Texas law for the second time, saying that the court was declining to protect women in the state seeking abortions “from grave and irreparable harm.”

The court did not agree to a request from Texas officials to use this case as a means to possibly overturn the court’s 1973 Roe v. Wade decision legalizing abortion nationwide.

Texas state officials had urged the Supreme Court Oct. 21 to leave the state’s current abortion law in place, and they also advised the court not to fast-track abortion providers’ challenge to the law that bans abortions after six weeks of pregnancy.

The two briefs, 80 pages total, were requested by the Supreme Court following an emergency request filed Oct. 18 by the Department of Justice asking the court to block enforcement of the Texas abortion law and the court’s announcement the same day that it was considering taking up the abortion providers’ challenge to the state’s abortion law prior to a lower court ruling.

In papers submitted to the court, Texas officials defended the most recent order issued by a three-judge panel of the 5th U.S. Circuit Court of Appeals allowing the state’s abortion law to go back into effect after a lower court judge had blocked it.

Signed by Texas Attorney General Ken Paxton, one of the briefs stressed that the government’s attempt to block the state’s law lacked merit because “the federal government cannot get an abortion and the Constitution does not assign it any special role to protect any putative right to abortion.”

It went on to say that if the Supreme Court decides to take up this case, it could potentially be used as a means to overturn the Roe decision.

The brief noted that the law’s heartbeat provisions — banning abortions after a fetal heartbeat is detectable — “further Texas’ interest in protecting unborn life, which exists from the outset of pregnancy.”

Texas state officials also stressed that there was “no basis for eschewing the normal avenue for appellate review,” meaning a challenge to the state law should not be examined by the nation’s high court before an appellate court weighed in on it, which is scheduled to happen later this year.

The Justice Department’s brief asking the abortion ban to be blocked was filed by Acting Solicitor General Brian Fletcher. He asked the court to treat the petition with a full review by the court, not something to be determined by what has been described as the shadow docket for emergency requests.

He stressed the current Texas law has “successfully nullified” Supreme Court decisions about abortion “within its borders” since the court has previously ruled that states cannot restrict abortion before viability, or 24 weeks of pregnancy.

In December, the court will take up a Mississippi ban on abortion after 15 weeks of pregnancy.

Hours after the Justice Department’s action, the Supreme Court announced it was considering taking up the abortion providers’ challenge to the state’s abortion law even before a decision on the case is made by the 5th Circuit.

In response to the Justice Department’s brief, Carol Tobias, president of National Right to Life Committee, said in an Oct. 18 statement that “the Biden administration’s unconditional support of the abortion industry shows just how far pro-abortion Democrats will go to curry favor with abortionists and abortion supporters.”

When the Supreme Court ruled against blocking the Texas abortion law Sept. 1, the Texas Catholic Conference, the public policy arm of the state’s Catholic bishops, said this action marked the first time since Roe v. Wade that the nation’s high court “has allowed a pro-life law to remain while litigation proceeds in lower courts.”

NEXT: Eucharistic revival could elevate understanding of Real Presence