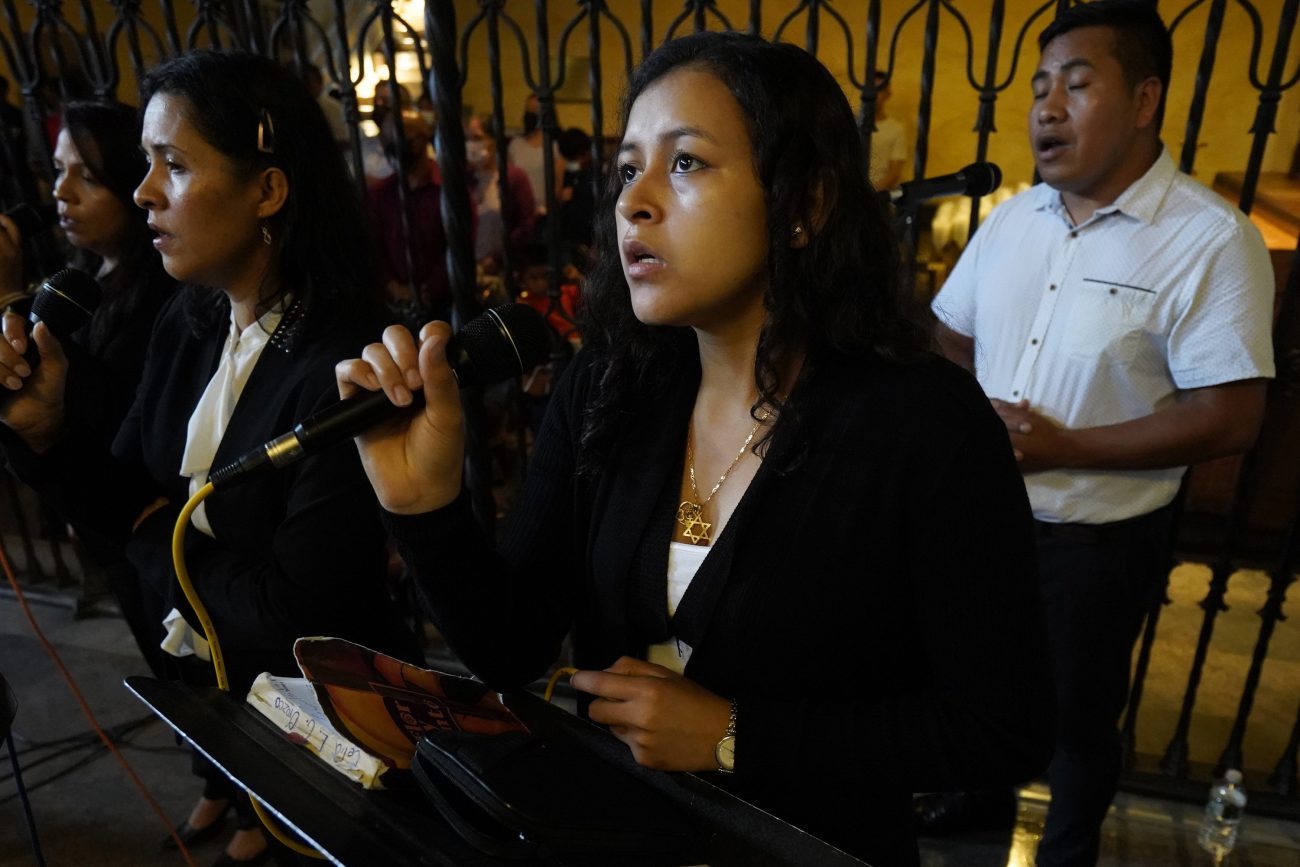 Members of the choir of Our Lady of Loretto Church in Hempstead, N.Y., sing during a Spanish-language Mass Sept. 6, 2021, at Immaculate Conception Seminary in Huntington, N.Y. The liturgy was part of the annual Labor Day Encuentro sponsored by the Hispanic Ministry and Evangelization office of the Diocese of Rockville Centre, N.Y. (CNS photo/Gregory A. Shemitz)

HOUSTON (CNS) — Catholic Church officials say they are not surprised by the 2020 U.S. census showing Hispanics accounted for 51.1% of the country’s growth, rising to 18.7%, or about 62.1 million, of the U.S. population.

Eight in 10 Hispanics in the U.S. are American citizens, according to the data. And for the first time, the percentage of whites dipped below 60% in the U.S. to 57.8% in 2020, the census stated.

For future planning in education and job training, the census reported the under-18 population is now majority people of color at 52.7%.

In Southwestern states, the numbers are even closer, with Hispanics now the largest population group in California, while in Texas, Hispanics grew to 39.3% of the state’s population, nearly equal to non-Hispanic whites at 39.7%.

All these census numbers align with a national program the Catholic Church has developed in V Encuentro, or Fifth National Encuentro, a series of regional and national meetings of Hispanic ministry leaders and youths, said Lazaro Contreras, director of the Galveston-Houston Archdiocese’s Office of Hispanic Ministry.

Now the office is in the midst of finalizing a bilingual manual to help Hispanic laypeople and church leaders to “provide a pastoral response to the large presence of Hispanics in the church in the U.S.,” Contreras told the Texas Catholic Herald, the archdiocesan newspaper.

“Another important aspect of V Encuentro is to support, encourage and prepare leaders among the Hispanic faithful in serving the entire church” and community,” he added.

A national conference of V Encuentro in 2018 before the pandemic hit brought 3,000 Hispanic leaders and clergy from across the nation together in Texas. Although COVID-19 slowed any follow-up responses, training sessions that included priests, deacons and parish leaders have continued with virtual sessions, Contreras said.

Now they will be moving back to in-person training, he said.

“The V Encuentro as a ‘culture of the encounter’ opened dialogues … and steps for pastoral action in 28 ministerial areas such as intercultural competencies, youth and young adults, family, vocations and leadership training among others,” he said.

“As parishes and archdiocesan offices reopen and expand their outreach to the faithful during and after the pandemic,” Contreras added, “the process and conclusions of the V Encuentro can be used as tools to animate pastoral leaders to reconnect and invite others to the parish life and community … not only to Hispanic Catholics but to all the diverse cultures.”

The annual National Hispanic Heritage Month, which just ended Oct. 15, may be growing in importance to recognize the contributions and influence of Hispanic Americans to history, culture and achievements in the United States, officials said.

In a video message, Cardinal Daniel N. DiNardo of Galveston-Houston encourages pastors to follow up with V Encuentro.

“It’s been an honor and learning experience for me in participating in the V Encuentro … to better respond to Hispanics in our church and to assist them in living out their discipleship.”

Father Philip Wilhite, pastor at Sacred Heart Catholic Church in Conroe, Texas, announced that on Oct. 30 the parish planned to host “our first of several gatherings of leaders — staff, councils, school board and ministries — to implement the conclusions of V Encuentro as part of establishing our next five-year parish plan.”

“A key priority is to develop and train new leaders, calling them forth especially from our Hispanic Catholics, to support the nurturing and development of the Catholic community,” he said.

Among Sacred Heart’s 8,000 registered families are Ivan and Cecilia Velasquez, who have seen the Hispanic population in the Conroe area grow over the past 14 years since moving there from Veracruz, Mexico.

“Our children are the future of the church,” Cecilia said, describing both her community and her own three daughters. “My 17-year-old is making her confirmation and talks about learning more and more about God. My 11-year-old and 9-year-old are making their holy Communion and taking catechism classes.”

“When we first started going to Sacred Heart, there was only one Spanish Mass and now we have two being celebrated,” added Cecilia, who attended the national conference. “With this continuing growth, it’s even more important for us to be actively involved in our church and community.”

Bishop Dell’Oro said he saw in V Encuentro participants “a sincere desire to serve the church in faithfulness to the bishops.”

He thought that the process “gave the possibility to build relationships beyond groups, parishes, ethnicities and languages. The church is already benefiting from it.”

Bishop Dell’Oro drew a comparison between V Encuentro and preparation now underway for the 2023 Synod of Bishops on synodality.

In preparing for this synod, he said, “I recognize that what we learned during the V Encuentro has already been the beginning of our contribution to this new challenge that Pope Francis has just presented to the Catholics across the entire world.”

Deacon Jackson said, “The experience of being involved in the V Encuentro has far exceeded what I thought it would be. I started out thinking that it would be an opportunity to foster vocations for the diaconate in the Spanish-speaking community.”

“I have encountered on a deeper level,” he said, “people who have a love for God and his church, graciously willing to share that love with all of God’s holy people.”

Zuñiga writes for the Texas Catholic Herald, newspaper of the Archdiocese of Galveston-Houston.

NEXT: Discontent with Biden administration grows among immigrant advocates