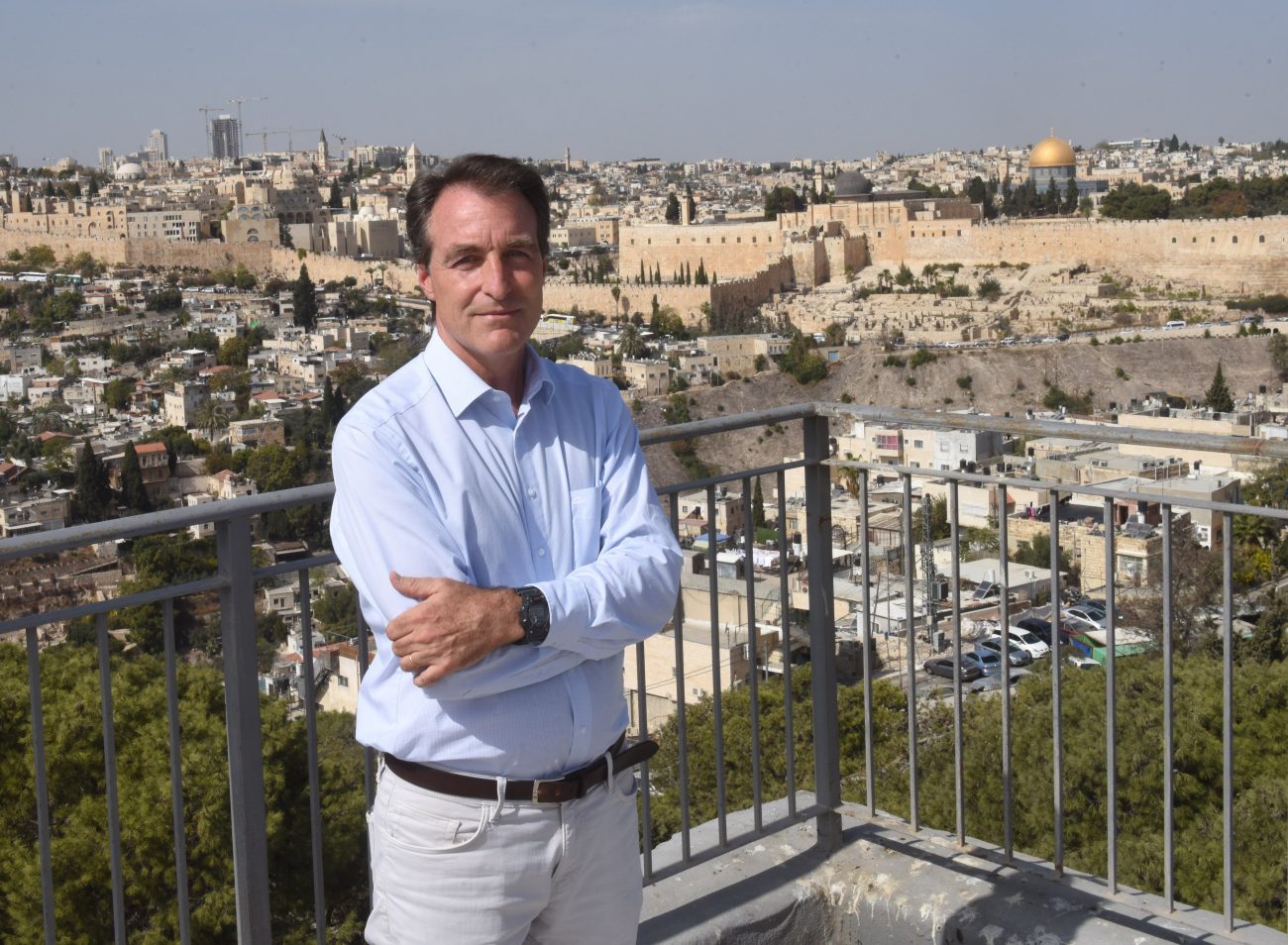 Bernard Thibaud, manager of Abraham's House, poses on the Mount of Olives overlooking Jerusalem Oct. 28, 2021. The Cultural Festival, a three-day event for Palestinian children, was forced to shut down by the Israeli Public Security Ministry, which claimed the event had connections to the Palestinian Authority. (CNS photo/Debbie Hill)

The Assembly of Catholic Ordinaries of the Holy Land said in an Oct. 27 statement that it viewed the decision by Israeli authorities with “great concern and astonishment.”

Bernard Thibaud, hostel manager, said the government action serves to further divide Palestinians and Israelis rather than build bridges that can lead to better understanding and peace.

Ministry officials issued a cancellation order Oct. 26, claiming the event was being funded by the Palestinian Authority without Israeli permission.

Thibaud said the order was served as the first day of the festival was underway with about 140 schoolchildren watching a puppet and clown performance.

The event was sponsored by the United Nations Development Program and the Finnish and Austrian governments.

“We cannot therefore understand the rationale of such a harsh and unjustifiable decision,” the ordinaries said. “Of course, the cultural event had a Palestinian character: the House is situated in East Jerusalem, and since the beginning the aim of the House was and still is to create a peaceful and constructive milieu in the neighboring context.”

“In Jerusalem we are (witnessing) continuous more aggressive and repressive attitude from the Israeli local authorities toward all what is considered Palestinian, as if the Palestinians do not have right of expression in the Holy City, as they are not part of it, as if Jerusalem is not for them,” the statement said.

The ordinaries said Abraham’s House, the institutions that support it and the Christian community of Jerusalem as a whole have the “right to promote and support all what they consider proper for the development of the community and of their relations with all the inhabitants of the Holy City.”

Abraham’s House was founded in 1964 following a call by St. Paul VI to create a hostel for pilgrims with the least resources, and is under the protection of the French consulate in Jerusalem. It is under the auspices of Caritas France.

Located in a congested East Jerusalem neighborhood on the Mount of Olives overlooking the Old City, Abraham’s House traditionally has offered its gardens as a venue for local events and celebrations, Thibaud explained.

“We work with the district to try to promote culture, and cultural events promote peace on ground level. When people are here, they are not out on the streets, and that is what we try to do daily. We did stop the event, which is a big shock to us,” Thibaud said.

He said the event was organized in partnership with three cultural organizations, including El-Hakawati, the Palestinian national theater, the Edward Said National Conservatory of Music and the Qafila Moving Stage mobile puppet theater.

A seminar on the Second Vatican Council document “Nostra Aetate,” the Declaration on the Relationship of the Church to Non-Christian Religions, with a small Jewish group had been planned at the hostel Oct. 30-31 but was canceled in view of the current circumstances, Thibaud said.

“We are trying to bring peace and peaceful events into the district,” he said. “By stopping these types of cultural events, Israel is going against their own interests. By stopping this, they are just creating violence.”

NEXT: Vatican extends until August listening phase for synod