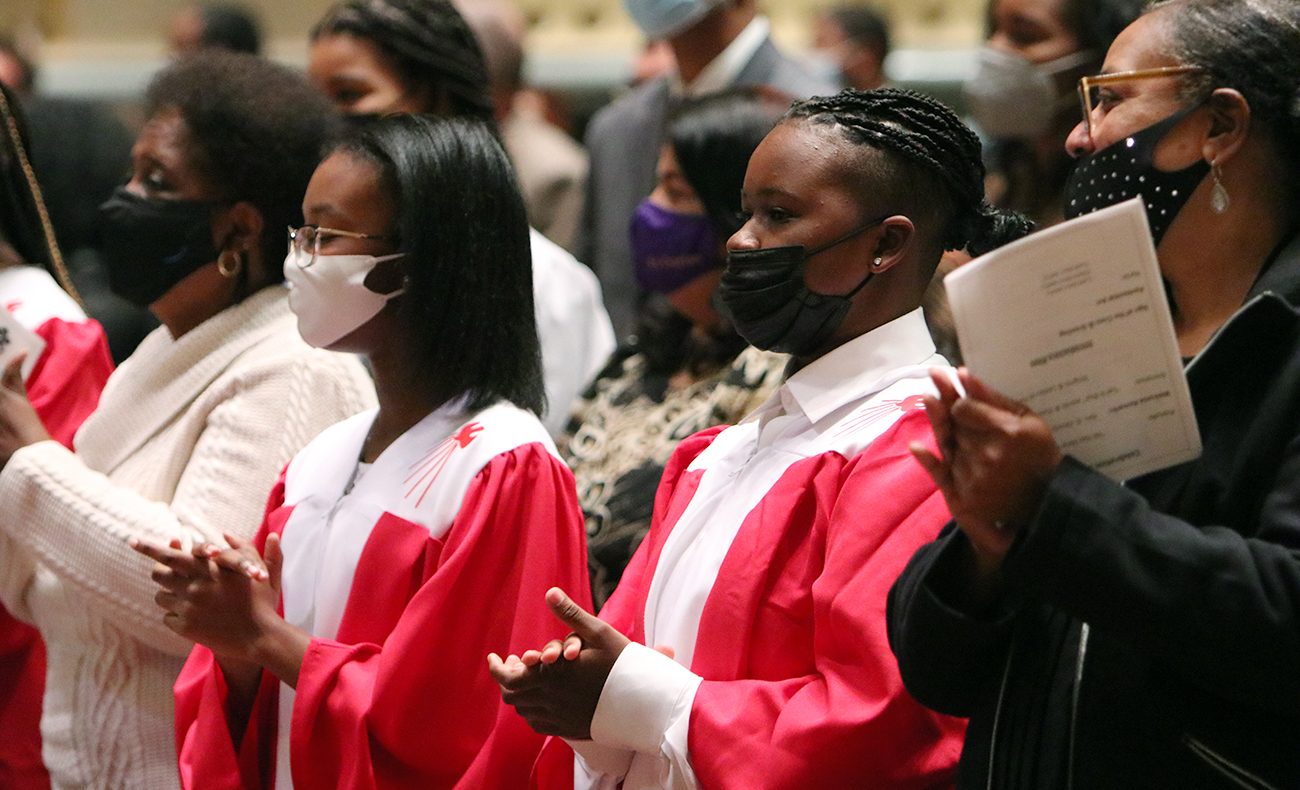 Some 25 teens received the sacrament of Confirmation from Archbishop Nelson Pérez during the 59th annual St. Martin de Porres Mass at the Cathedral Basilica of SS. Peter and Paul.

Some 275 area faithful came together last weekend for an annual liturgy honoring Black Catholic spirituality while welcoming a new generation of believers.

Archbishop Nelson Pérez was the principal celebrant at the Nov. 7 St. Martin de Porres Mass, hosted by the Cathedral Basilica of SS. Peter and Paul.

Sponsored by the archdiocesan Office for Black Catholics (OBC), the liturgy, now in its 59th year, invokes the intercession of the Peruvian saint, who was born in 1579 to a free Black woman and a Spanish nobleman. Raised amid poverty and racial discrimination, the youth developed a profound spirituality and became a lay Dominican brother. His strict mortifications, charitable works and devotion to the Eucharist earned him a reputation for holiness, and he was eventually canonized by Pope John XXIII in 1962.

During the Mass, some 25 teens and one adult — representing a total of five archdiocesan parishes — received the sacrament of Confirmation.

In his homily, Archbishop Pérez invited attendees to surrender themselves to Holy Spirit’s providential care, using the words from the Mass’s entrance hymn, “Let It Rise” by Holland Davis, performed by the Philadelphia Catholic Gospel Mass Choir under the direction of composer Tonya Taylor Dorsey.

Referencing the first reading (1 Kgs 17:10-16) in which God miraculously provides for Elijah, the widow of Zarephath and her son, the archbishop reminded those present that “God is never outdone in generosity” to those who trust in him. 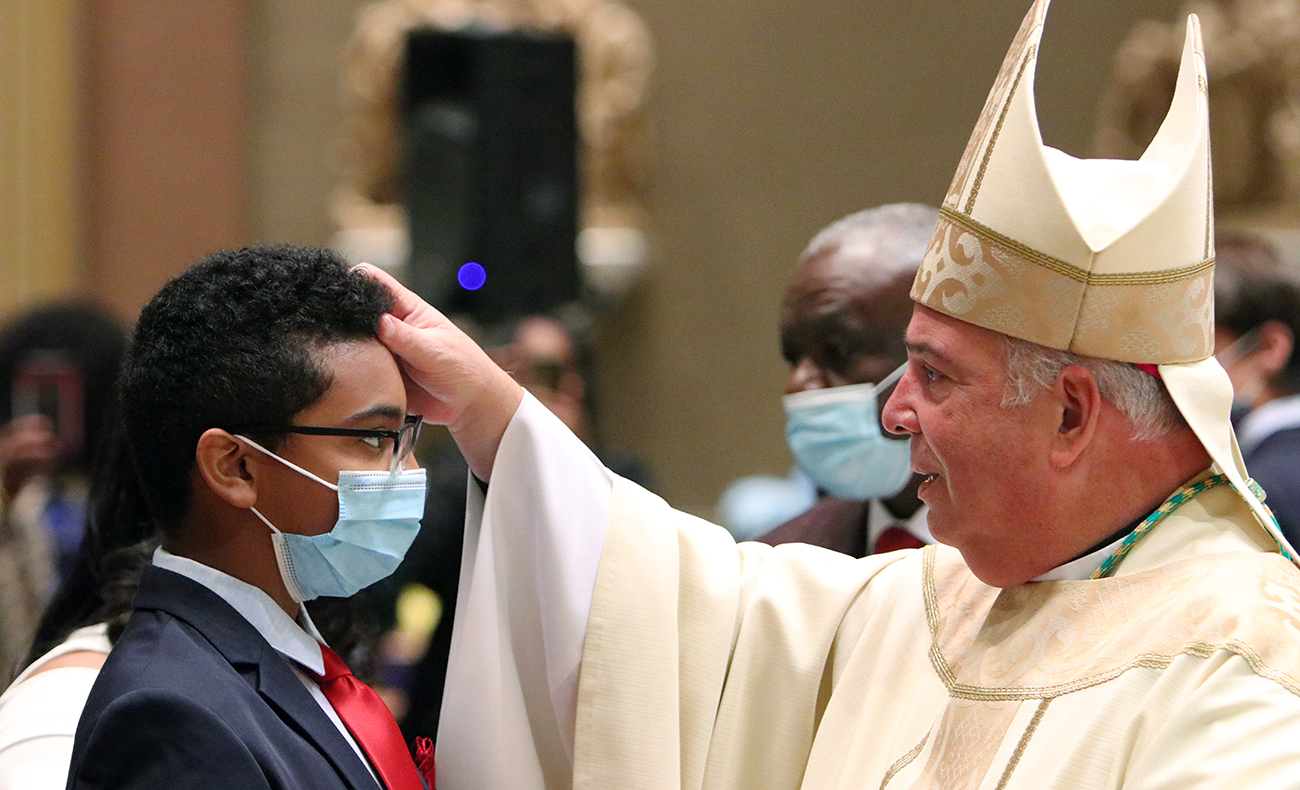 Archbishop Nelson Pérez administers the sacrament of Confirmation to a teen during the 59th annual St. Martin de Porres Mass Nov. 7 at the Cathedral Basilica of SS. Peter and Paul. (Sarah Webb)

Speaking to those confirmed, the archbishop also quoted his popular personal maxim, which has spread widely via social media and Catholic merchandise: “Never, ever underestimate the power of the Holy Spirit working in you, through you and despite you.”

He added that “most of the time,” the third Person of the Trinity operates “unbeknownst to you.”

“I love the Mass,” she said. “God called me to the Catholic Church.”

Raised in a multidenominational Christian household, Wood described herself as “a born ecumenical” who easily worshiped in African Methodist Episcopal, Baptist and Methodist traditions. Influence by an aunt who had converted to Catholicism, she began attending Mass as a child, “fascinated” by the Latin words of the liturgy and ultimately professing the Catholic faith. 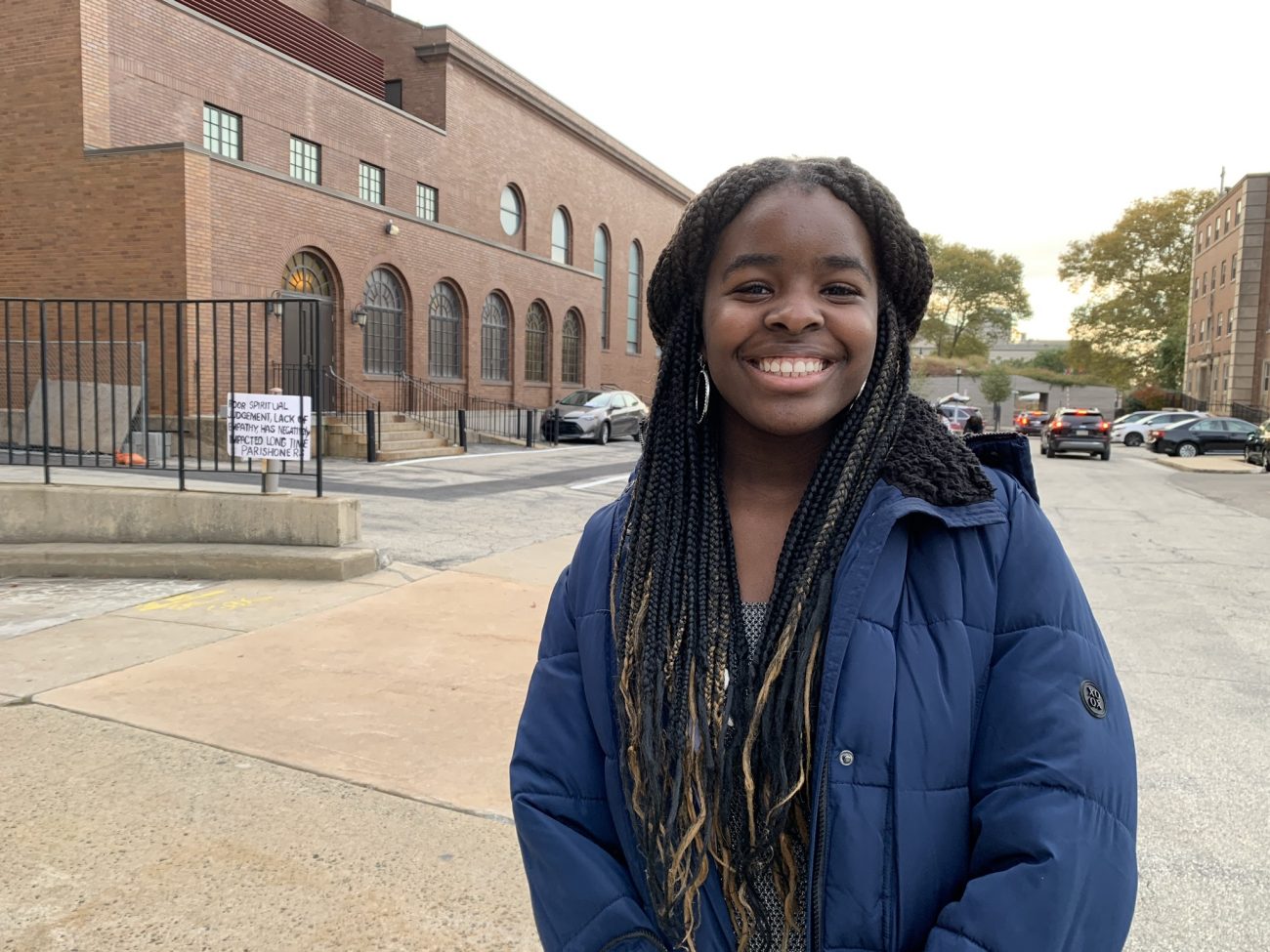 Angela Okeke of St. Cyprian Parish in Philadelphia said she is ready to “grow in her dream with Christ,” having been confirmed Nov. 7 during the annual St. Martin de Porres at the Cathedral Basilica of SS. Peter and Paul. (Gina Christian)

Devotion to Mary (an “offshoot of devotion” to her own mother) and to St. Jude have also sustained her, she said.

“Praying the rosary and praying to St. Jude have gotten me through some rough times,” Wood said.

“I’ve only been aware of it for the past 10 years,” she said. “The first time I came … I was surprised to see my mother sitting in the congregation. She had been coming and I didn’t know about it.”

Much work remains to be done in those areas, particularly within the Catholic Church itself, said concelebrant Father Christopher Walsh, pastor of St. Raymond of Penafort Parish in Philadelphia.

“The reality is that in recent times, in the lives of people still worshiping in our churches, Black Catholics were treated unfairly and unjustly,” said Father Walsh. “And we have to admit that.”

At the same time, “the numbers reveal that Black families across the U.S. are still more religious than White families,” he said. “How can we make the Catholic Church a viable option for families that are still choosing faith?”

One place to start is with St. Martin de Porres himself, said Madeline Tymes, who along with husband Ernest belongs to the Knights and Ladies of Peter Claver — who provided the archbishop with an honor guard during the Mass — while serving as ambassadors for the canonization of Black Catholic priest Venerable Augustus Tolton.

“He was an awesome saint, so gifted by God,” she said. “Just to look at his life story and, integrate the things he talked about. He really loved God and was trying to tell everyone to do the things that Jesus tells us to do. Jesus came here for us, he sacrificed for us and we have to imitate Jesus and be disciples for our Lord.”

After being confirmed during the Mass, Angel Okeke of St. Cyprian Parish in West Philadelphia said she is now ready to share her faith with the world around her.

“I received the Holy Spirit, and I am growing more in my dream with Christ,” she said. “I’m here to fulfill his purpose for me.”

NEXT: Local faithful send container of help, hope to Haiti