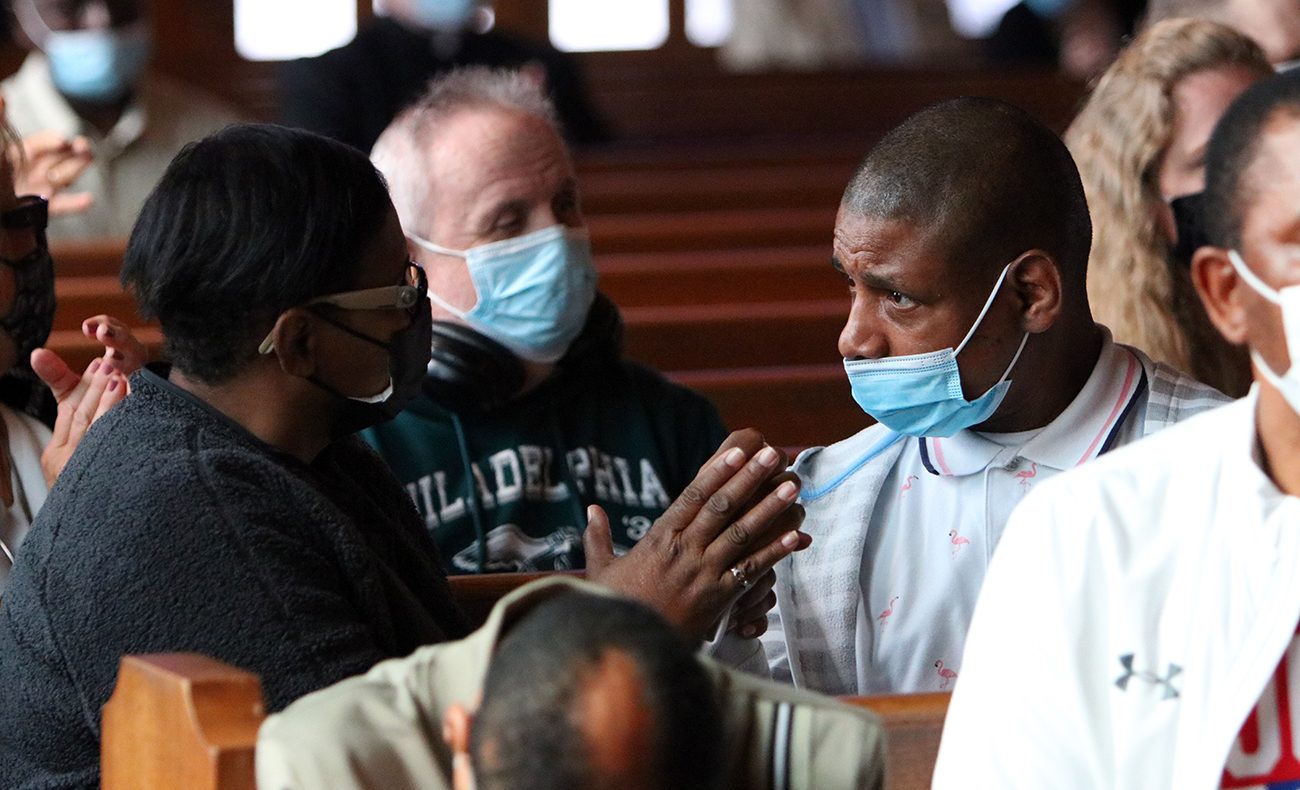 Members of the Communities of Don Guanella and Divine Providence (DGDP) gathered at Our Lady of Fatima Parish in Secane for an Oct. 25 Mass celebrated by Archbishop Nelson Pérez to mark DGDP's 60th anniversary and the feast day of its patron, St. Luigi Guanella. (Sarah Webb)

An archdiocesan disability care community celebrated “what love looks like” during a recent Mass in honor of both its 60th anniversary and its patron saint.

Archbishop Nelson Pérez presided at an Oct. 25 liturgy for the Communities of Don Guanella and Divine Providence (DGDP), which serve individuals with intellectual disabilities through a continuum of care, including residential and off-campus living arrangements, in-home supports, respite aid and day programs. Operated by archdiocesan Catholic Social Services (CSS) and supported by the Catholic Charities Appeal, DGDP is licensed by Pennsylvania’s Department of Human Services.

The Mass, which took place at Our Lady of Fatima Parish in Secane, marked the feast day of St. Luigi (also known as “Don,” or “Father”) Guanella, a 19th-century Italian priest who ministered to children with physical and intellectual disabilities. Through his writings, homilies, public speeches and charitable initiatives, Don Guanella promoted social and spiritual care for his buoni figli (“good children”), whom he regarded as blessings from God.

In the late 1940s and 1950s, the Archdiocese of Philadelphia invited Don Guanella’s religious orders – the Religious Orders of the Servants of Charity, the Daughters of St. Mary of Providence and the Pious Union of St. Joseph Prayer Association — to establish facilities in the region. The expansion of that mission over the years, along with more recent state initiatives to downsize large institutional care settings, has shaped the current structure of the DGDP Communities.

Speaking to the 175 gathered for the liturgy, Archbishop Pérez said residents of DGDP were “teachers of love” who showed others “day in, day out what it means to love” by being “patient and kind and merciful.”

Fran Swiacki, executive director of CSS’s developmental programs, said DGDP residents – a number of whom served at the Mass – offered those around them “unconditional acceptance.” 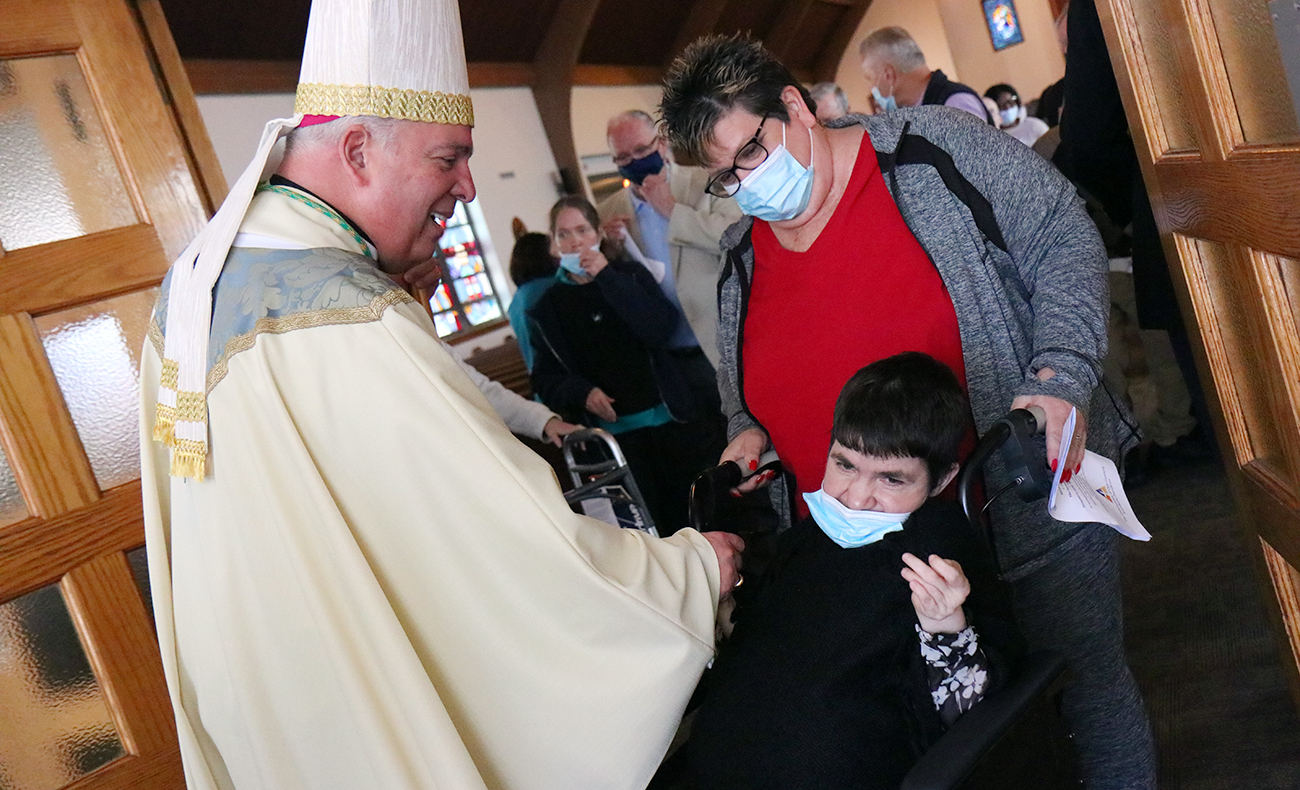 Archbishop Nelson Pérez greeted staff and residents from the Communities of Don Guanella and Divine Providence (DGDP) after an Oct. 25 Mass at our Lady of Fatima Parish in Secane, at which DGDP marked its 60th anniversary. (Sarah Webb)

Divine Providence Village (DPV) administrator Angela Babcock said clients are “so full of grace” that “every piece” of the Mass’s second reading (1 Cor 12:31, 13:1-8,13) “you could just replace with the name of a resident we serve.”

Clients are able to draw “a sense of empathy” out of those they encounter, said Swiacki — one that transforms staff into “human instruments” of DGDP’s mission.

That vocation has taken on an even deeper meaning throughout the COVID-19 pandemic, he said.

With the intellectual and developmental disability populations among the most vulnerable to the disease, DGDP staff “risked their lives” to care for residents, particularly during the pandemic’s onset, said Swiacki.

As DPV’s then-director of nursing, Babcock herself regularly logged 75-hour weeks at her station and threw her energies into securing supplies of the Moderna and Pfizer doses.

Along with former DPV administrator Jean Calvarese-Donovan, she arranged for the facility to become a vaccination provider, an effort that expanded into an acclaimed autism-friendly clinic at Lincoln Financial Field in partnership with the Eagles Autism Foundation. By May 2021, Babcock and her team had fully vaccinated some 7,000 in the area’s IDD community, while also helping to make COVID jabs available to deaf and hard of hearing individuals.

On a daily basis, said Archbishop Pérez, staff “might not even know they’re being ministers of God’s love,” because they are simply focused on “cooking, cleaning … or working behind a desk in an office.”

Yet those tasks are “all part of love,” he said, and reflect the self-sacrifice of Christ on the cross.

For Jesus, “love … wasn’t just a feeling or an affection,” said Archbishop Pérez. “Love was to lay down his life for others in service, even if it meant giving up your own life.”

DGDP is “a blessed initiative” that upholds human dignity, said Servant of Charity Father Dennis Weber, reminding those on hand that the second miracle for St. Luigi’s canonization – the healing of William Glisson from neurological injuries – took place in Delaware County.

Marge Powers, whose 56-year-old daughter Sally has been a DGDP resident for 30 years, said DGDP is itself a miracle.