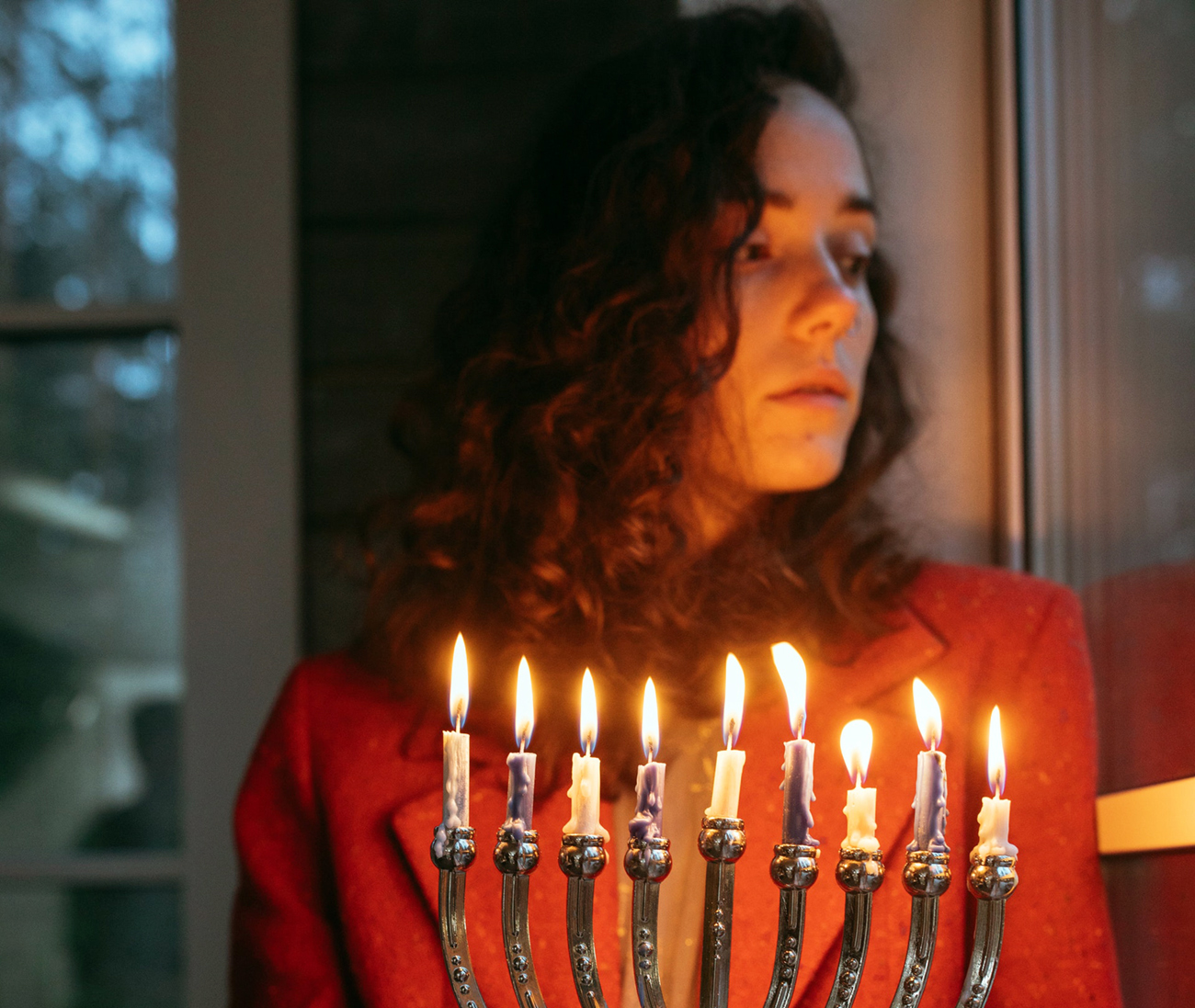 A woman holds a lighted hanukkiyah, a menorah (candelabra) used specifically for the Jewish feast of Hanukkah. On each night of the eight-day festival, a successive candle is lit. (Yaroslav Shuraev/Pexels)

The Jewish holiday of Hanukkah “offers a hopeful message” about religious freedom, say scholars at a local Catholic university.

The eight-day festival, celebrated this year from sundown Nov. 28 to sundown Dec. 6, recalls the victory of the Maccabees, a small group of Jewish fighters, over Seleucid king Antiochus IV Epiphanes, who sought to replace Jewish religious practices and identity with Hellenistic culture.

“At a time when religious hostility and tensions between those who are different are on the rise, Hanukkah reminds us of the ennobling story of those who successfully resisted persecution,” said Adam Gregerman, associate professor of theology and religious studies and co-director of the Institute for Jewish-Catholic Relations (IJCR) at Saint Joseph’s University (SJU).

During Antiochus’ reign (175-164 B.C.), Jews were forbidden on pain of death to practice circumcision, observe their dietary practices or study the Torah (the five books of Moses that form the basis of Jewish law).

Nicknamed “the madman” (a pun on his title of “god manifest”), Antiochus also defiled the Temple in Jerusalem by placing in it a statue of the Greek god Zeus and sacrificing swine on its altar, while looting its sacred vessels and precious metals.

A three-year campaign led by five sons of the priest Mattathias – among them Judas Maccabeus – resulted in the reclamation of the Temple and the institution of Hanukkah, which means “rededication.”

“Ancient Jews, vilified and even murdered for their religious beliefs and practice, rose against their oppressors in order to be free to worship God and observe God’s commandments,” said Gregerman.

The origins of Hanukkah are recounted in 1 and 2 Maccabees, which – although part of Catholic Scripture – are not included in the Hebrew Bible. Some 250 years after the Maccabean victory, historian Flavius Josephus wrote an account of Hanukkah, which he termed the “Festival of Lights.”

The Talmud (rabbinic teachings on the Torah) includes in its retelling a miraculous jar of oil that burned for eight days, an event commemorated by the hanukkiyah, a holiday-specific menorah (candelabra) that includes eight branches plus one for a “helper” candle. Each night of Hanukkah – which is largely celebrated in the home — an additional candle is lit, underscoring the Jewish concept of lo moridim ba-kodesh (“one does not decrease in holiness”).

Blessings, prayers and songs accompany the rituals, along with foods fried in oil, such as potato pancakes and jelly doughnuts. Various games are played with dreidels, spinning tops inscribed with Hebrew letters standing for Nes gadol haya sham, “a great miracle occurred there” (or, in Israel, “here”).

Since the eight days of Hanukkah “almost always fall within the month of December,” Jews and Christians in the northern hemisphere “celebrate their respective holy days at the darkest time of the year,” said Philip Cunningham, IJCR co-director and professor of theology and religious studies at SJU. “The theme of light in the darkness is common to both communities’ observances.”

At the same time, Hanukkah is actually “one of the minor celebrations on the Jewish liturgical calendar,” Cunningham noted, with the Yamim Noraim (“Days of Awe”), comprised of Rosh Hashanah and Yom Kippur, ranking as central.

Like Christmas, Hanukkah can find itself at risk of being “hyper-commercialized,” he added.

“Jews feel similar pressures over Hanukkah, perhaps even more so as a religious minority,” said Cunningham. “The Jewish version of the ‘elf on the shelf’ is the ‘mensch on the bench,’ and Hanukkah bushes sometimes appear in emulation of Christmas trees.”

Amid efforts to “spread holiday cheer to Jewish friends and neighbors,” he said, “Christians ought to respect the distinctive meaning of Hanukkah for Jews and not simply expect them to participate in the public Christmas practices of the larger Christian community.”

In fact, said Cunningham, that approach is a way of “actually putting one of the meanings of Hanukkah into practice.”

Gregerman agreed, saying that Hanukkah “reminds us of the imperative to make room in our hearts for those who are different from us.”

“Take a moment to wish your Jewish neighbors and friends a ‘Happy Hanukkah,’ and not simply ‘Happy Holidays,’” said Cunningham.