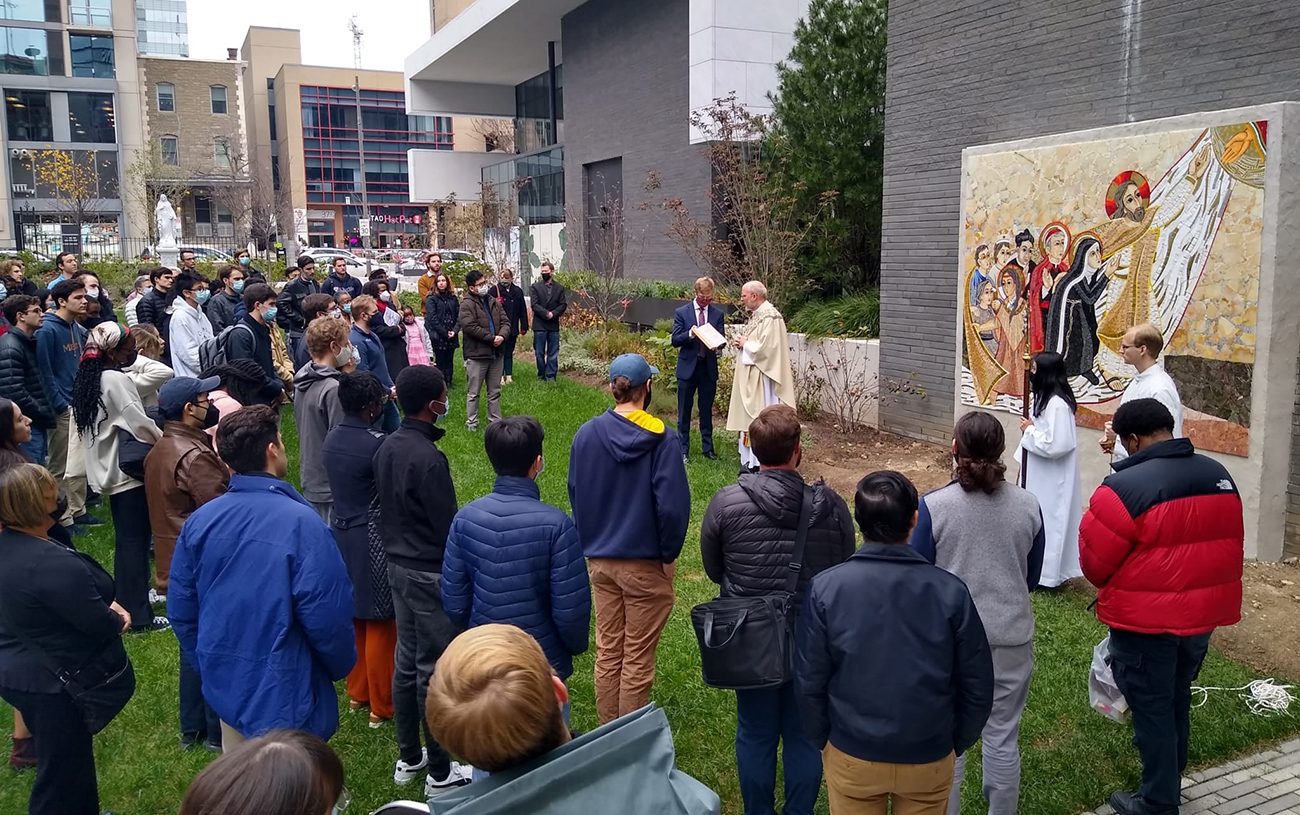 Father Carlos Keen of St. Agatha-St. James Parish and the Newman Center leads a blessing rite with parishioners and guests for the new multicultural mosaic in the parish park Sunday, Nov. 21.

In a city that is famous for its colorful murals that depict Philadelphia’s diverse citizens, a new mosaic, “That All May Be One” in West Philadelphia at St. Agatha-St. James Parish and the Penn-Drexel Newman Center faithfully captures the same spirit of multicultural community.

Parishioners of the parish and Newman Center on 38th and Chestnut streets gathered Sunday, Nov. 21 for a special Mass and the installation and blessing of their new multicultural mosaic.

They also welcomed guest speaker Mercy Sister Cora Marie Billings, who grew up in the parish and was the first Black Catholic woman to enter a religious community in Philadelphia. She spoke on “Father Tolton and Black Catholic Holiness,” who is one of the people featured in the mosaic.

Venerable Augustus Tolton was the first widely recognized Black Catholic priest in the United States, ministering to the Catholic community of Chicago in the late 19th century.

Sister Cora Marie spoke to the fact that all are called to holiness, each in one’s own way, discerning how the Spirit is calling us to respond. She spoke about her own faith journey, starting in local Catholic schools. Her great-grandfather was a slave of Jesuit priests, and her aunt had to leave Philadelphia to join a religious community because none would accept her in the city.

Sheila Hodges, a University of Pennsylvania sophomore and student leader at the Newman Center, spoke with Sister Cora Marie and “was touched by her honesty about both the beauty and flaws in the church during her experience as a Black nun. In addition, I loved her advice about ending racism through building relationships and having conversations.”

Long-time parishioner Carmen Sanchez was also on stage with Sister Cora Marie during her presentation.

“Like Venerable Augustus Tolton,” said Sanchez, Sister Cora Marie “also shows an indomitable, persevering spirit, which reminded me of my own grandmother, who had a resilient soulfulness grounded in love of truth in the Holy Spirit. We as Black Catholics have been given a rich legacy of faith, which demands that we live courageously and with intentionality. As Sister Cora Marie said, ‘We’re all called to be saints like Father Augustus.'”

The new mosaic also features Philadelphia’s own St. Katharine Drexel, who provided financial support for Father Tolton’s ministry. St. Kateri Tekakwitha and St. John Henry Newman are similarly depicted, but what makes the mosaic particularly unique is the presence of lay people who stand next to these legendary saints.

In the history of the Catholic Church, mosaics typically feature saints, the Holy Family, or depict God himself.

The image residing in St. Agatha-St. James’ Park, however, portrays saints and lay people walking together underneath Christ’s protective mantle.

The inclusion of “everyday” people in the mosaic was not an accident. 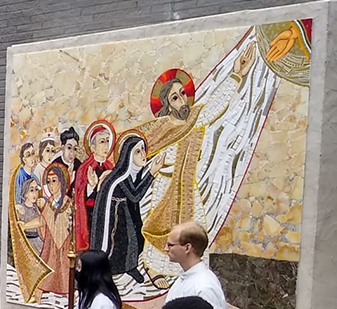 Father Remi Morales, S.C.V., one of the priests at the parish, said the mosaic “represents our diverse community being held, encouraged, guided by Christ and the saints. The beauty of the mosaic comes from this communion of the glorious and the struggling, both their destination and their journey. The mosaic represents the eternal and the temporal dimensions of the church and it reminds us that we are not alone.”

The Catholic campus minister for the University of Pennsylvania served by the Newman Center, Jule Coppa, said, “The beauty of the mosaic is arresting.”

Made with gleaming stones in gold, crimson, cobalt and ivory, the mosaic is striking in both its materials and message. The artists behind the mosaic have an equally powerful story.

The work of art was imported from Peru where Italian artists completed the commission over the course of six months before traveling to the United States to install it at the Newman Center.

The artists moved with the local priest to the Peruvian highlands to start a mission, and they founded the “Don Bosco Art Workshop and School.” They live with local people and work together in the arts and in service to the neediest of the area, serving food to more than 600 people a day as well as running a home for handicapped persons.

The aim of their modern-day mosaic style is to “look with the eyes of an ancient iconographer and work with contemporary languages,” said Matilde Randi, the lead artist. Observers said this approach made the mosaic a perfect fit for the diversity of St. Agatha-St. James and the Newman Center.

“The decoration on the wall should be such that, when a person enters the church or is in front of a sacred image, you perceive that you are in an inhabited space, which seeks to transmit through art the presence of God and his communion,” said Randi. 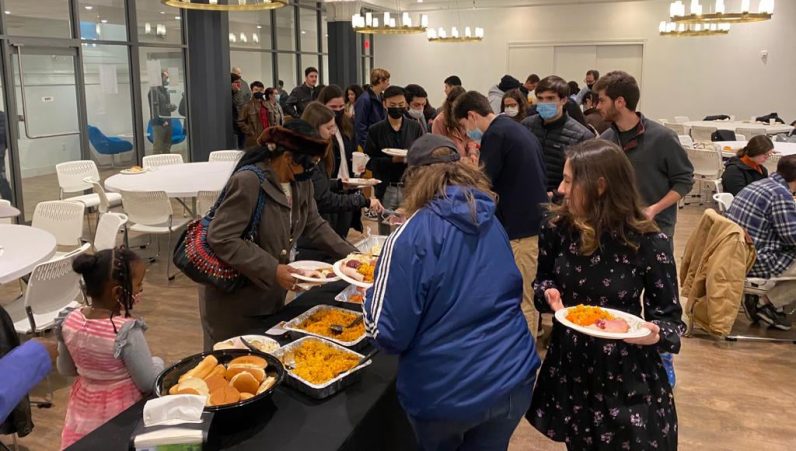 Parishioners of St. Agatha-St. James Parish and the Newman Center share a Thanksgiving-style potluck meal Nov. 21 after the mosaic blessing at the parish in West Philadelphia .