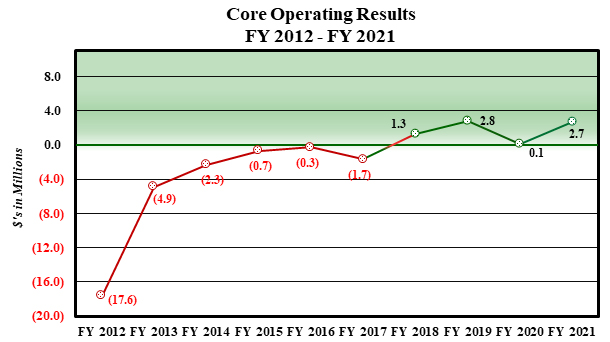 The finances for the Philadelphia Archdiocese continue to firm up and show improvement as the audited financial statements show for the last fiscal year, released on Dec. 2.

The statements were prepared by the firm Grant Thornton and cover the fiscal year from July 1, 2020 to June 30, 2021 for the central administration of the archdiocese through its Office for Financial Services (OFS). Parish finances were not included, nor were other church entities including Catholic schools and social services.

According to an explanatory analysis prepared by the archdiocese, the $33.9 million was offset by one-time items, referred to as non-recurring, that resulted in a “core operating surplus” of $2.7 million for the fiscal year.

It was the fourth consecutive year showing a modest surplus.

That figure, by comparison with years past, shows substantial improvement over a nine-year period dating to 2012 when the figure stood at a $17.6 million core operating deficit.

Among the non-recurring items was the gain of $8.2 million from the sale of a parcel of the Don Guanella property in Marple Township, Delaware County, and a total of $16.8 million regarding the Risk Insurance and Welfare Benefits Trusts and the Deposit and Loan Program Trust.

Considered as gains, nonetheless the funds are not available for general operating needs but instead are meant to improve the financial health of the trusts’ long-term obligations.

The analysis gave an update on the progress of these obligations including lay employee and priest retirement trusts.

The Lay Employees Retirement Program (LERP) was frozen in 2014 as the archdiocese shifted from a traditional benefit plan to a 401k-style defined contribution plan (403b under the IRS designation for nonprofit organizations). The LERP trust has assets of $578 million and is funded at 97.5% of anticipated liabilities.

The priests’ retirement plan is now in a healthier position to pay retirement benefits as it is overfunded by more than $18 million.

Another of the obligations is the Risk Insurance Fund, which funds the Independent Reconciliation and Reparations Program (IRRP) that offers settlement money via third-party administrators to people making a claim of past sexual abuse by clergy of the archdiocese.

A note in the audited financials states that the Philadelphia Archdiocese estimates a total of $83.1 million would be needed for claims and related expenses for the IRRP.

The remaining required amount of $2.3 million, read the statement, “will be funded through available liquidity” from sources including borrowing or contributions from other church entities.

Without question the impact of the COVID-19 pandemic has had an effect on archdiocesan finances, but perhaps not as profound might be expected, given the magnitude of social and economic disruptions over the past 18 months.

Even though the revenue from parish assessments that fund the central administration’s needs remained much the same in 2021 as in 2020, at roughly $22 million, overall cash and equivalents dropped $19.4 million from the previous year.

But that decline in revenue was offset by a strong investment gain of $24 million over the previous year, thanks mostly to the archdiocese’s gain of $23.8 million from its SEI Catholic Values Funds.

A note in the audited financial statements acknowledged that although the full impact of the pandemic “on OFS’ operations and financial condition” remains uncertain, “potential adverse consequences to OFS of COVID-19 may include a decline in assessment income.”

That alludes to whether monetary collections in the parishes will rise or fall, because they are the basis for calculating the assessments.

From a spiritual and temporal perspective in the archdiocese, it’s really true that nothing compares to being there, in person, at church.