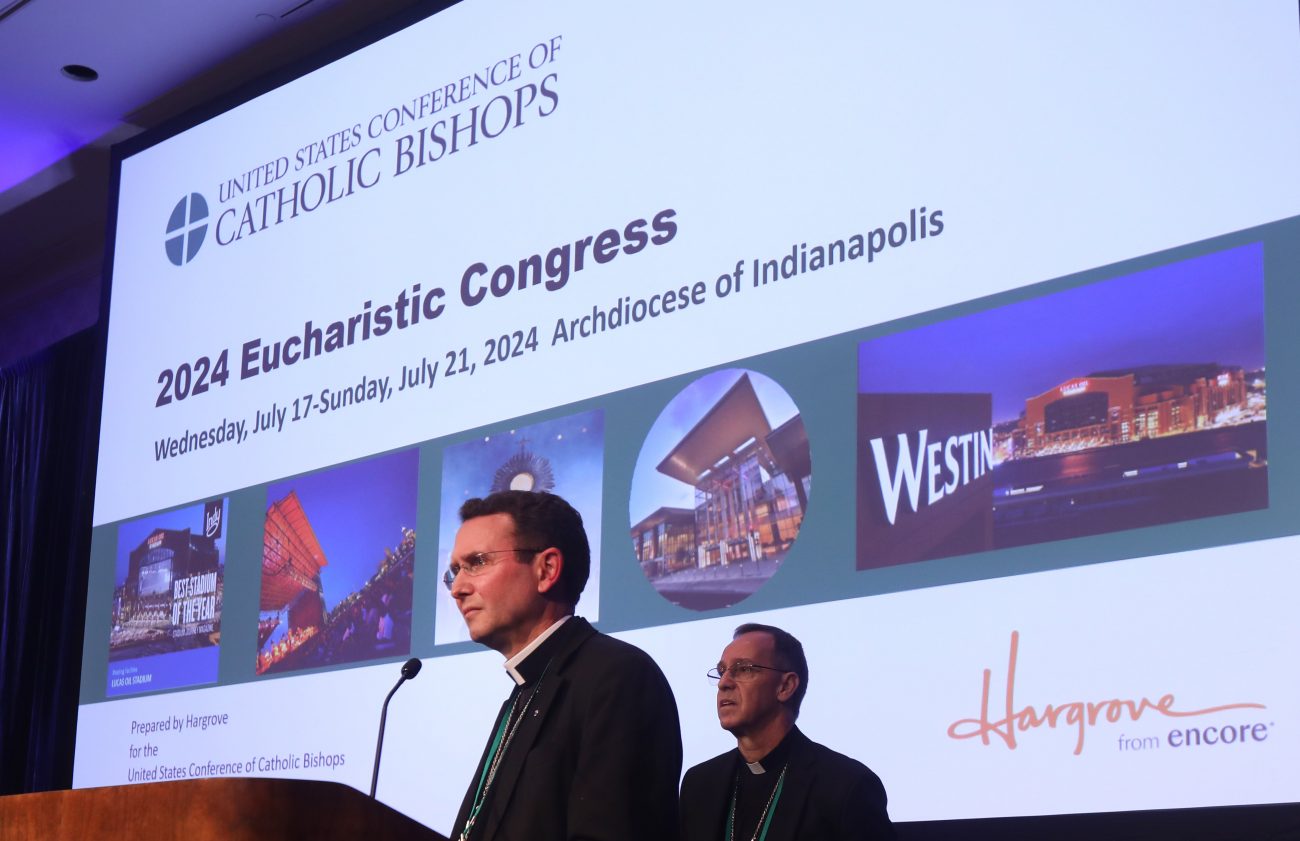 Auxiliary Bishop Andrew H. Cozzens of St. Paul and Minneapolis listens to a question during a Nov. 17, 2021, session of the fall general assembly of the U.S. Conference of Catholic Bishops in Baltimore. Due to the COVID-19 pandemic, it is the first in-person bishops' meeting since 2019. (CNS photo/Bob Roller)

BALTIMORE (CNS) — The U.S. bishops’ focus on the significance of the Eucharist in the life of the church isn’t just about on the statement they approved at their fall meeting.

It also is about something bigger: a three-year eucharistic revival that will culminate with the National Eucharistic Congress 2024 in Indianapolis.

The bishops approved a motion Nov. 17 during their general assembly in Baltimore to host this congress with 201 votes in favor, 17 against and five abstentions.

Auxiliary Bishop Andrew H. Cozzens of St. Paul and Minneapolis, who was recently named bishop of Crookston, Minnesota, gave the bishops details about this planned revival just before they voted on it.

The bishop, who is chairman of the U.S. Conference of Catholic Bishops’ Committee on Evangelization and Catechesis, said the revival could be a time of healing for the entire church as well as a movement of evangelization and a reawakening of understanding of the sacrament of the Eucharist for Catholics across the country.

The revival will officially start on the feast of Corpus Christi June 16, 2022, with a diocesan focus that will include eucharistic processions and other events of adoration and prayer around the country.

In 2023, the emphasis will be on parishes and resources aimed at increasing Catholics’ understanding of what the Eucharist really means.

Part of the impetus prompting this effort was a Pew study in the fall of 2019 that showed just 30% of Catholics understand the real presence of Christ in the Eucharist.

Bishop Cozzens noted the price tag for the National Eucharistic Congress — $28 million– is expensive, but said it is worth it and can be doable with fundraising.

He said many apostolates and ministries are donating time and resources to help make the eucharistic revival a reality.

Some bishops questioned the cost of the congress that wraps up this venture, but others spoke about the potential this will have to bring Catholics back to the church and bring those in the church to a deeper sense of devotion and a stronger faith.

Bishop Cozzens pointed out that such large-scale church events can be transformative and said the National Eucharistic Congress may end up being something the Catholic Church revisits 10 years from now.

Blessed Carlo Acutis will be the patron for the first year of the revival. The Italian teen, who was beatified in October 2020, died of leukemia in 2006 at age 15. He was a programmer who used social media to unite many people and spread Christian values.

In his apostolic letter proclaiming the youth “blessed,” Pope Francis said he “cultivated a friendship with our Lord Jesus, placing the Eucharist and the witness of charity at the center of his life.”