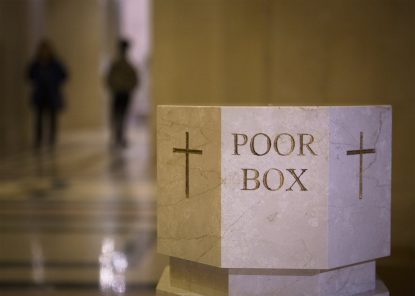 A poor box is seen at the Basilica of the National Shrine of the Immaculate Conception in Washington Jan. 26, 2020. (CNS photo/Tyler Orsburn)

WASHINGTON (CNS) — The U.S. bishops considered a new resolution on diocesan financial reporting Nov. 16, the first of two days of public sessions during their Nov. 15-18 fall general assembly in Baltimore.

At the November 2016 bishops’ meeting, “we agreed to review the resolution at this assembly,” said Archbishop Jerome E. Listecki of Milwaukee, chairman of the bishops’ Committee on Canonical Affairs and Church Governance.

“A key hallmark of Pope Francis’ pontificate has been the promotion and safeguarding of sound fiscal administration,” Archbishop Listecki said in a prefatory message to bishops.

“Through the adoption of various internal resources, he has strengthened the church’s commitment to transparency and accountability and highlighted the importance of exercising stewardship over temporal goods in furtherance of the church’s mission,” Archbishop Listecki said.

The proposed resolution’s text “acknowledges the legitimate rights of the diocesan bishop to administer the material resources of the diocese that he shepherds as a ‘good householder,'” it says, quoting Scripture.

It also is intended, the resolution says, to provide “fraternal cooperation and support” among suffragan bishops and assist the metropolitan archbishop “in his own special solicitude” for suffragan dioceses in the province.

Each suffragan bishop, at the end of the fiscal year, is supposed to send to the metropolitan the names and professional titles of the members of his diocesan financial council; the date the finance council met during the preceding fiscal year and since the end of that fiscal year; a signed statement attesting to the review and discussion of audited financial statements of the diocese; and a statement that the diocesan financial council was consulted according to the norms of canon law.

“It encourages the adoption of a voluntary reporting mechanism for the bishop to affirm on an annual basis that his diocesan finance council is functioning in accord with the expectations of canon law,” Archbishop Listecki told the bishops at the meeting.

“The Code of Canon Law is specific in several instances when a diocesan bishop must receive the consent of his finance council as well as when he must seek advice due to the importance of the matter at hand,” he said.

Although the committee had decided to not make any changes in the document except for its effective dates, Archbishop Listecki said, “we did accept one modification. It was a stylistic modification — a good one.”

Approval of the new resolution requires a majority vote from those bishops present and voting.