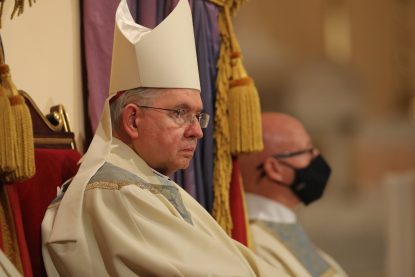 Archbishop José H. Gomez of Los Angeles, president of the U.S. Conference of Catholic Bishops, sits in the cathedra, or bishop’s chair, as he concelebrates Mass at the Basilica of the National Shrine of the Assumption of the Blessed Virgin Mary Nov. 15, 2021, in Baltimore during the bishops’ fall general assembly. (CNS photo/Bob Roller)

WASHINGTON (CNS) — Ahead of the U.S. Conference of Catholic Bishops’ general assembly in Baltimore Nov. 15-18, a group of Catholic and other faith leaders called on Archbishop José H. Gomez of Los Angeles, USCCB president, to apologize for remarks he made about social justice movements in a Nov. 4 address.

Archbishop Gomez made the comments in a videotaped address for the 23rd Catholic and Public Life Congress in Madrid, which focused on political correctness and “the dangers of this mega-ideology,” such as preventing debate and limiting freedoms.

He spoke on “the rise of new secular ideologies and movements for social change in the United States and the implications for the Catholic Church.”

The church must proclaim Jesus Christ “boldly” and “creatively” in the face of new secular movements that promote “social justice,” “wokeness” and “intersectionality,” among other beliefs, as the answer to all of society’s ills, Archbishop Gomez said.

The church needs to understand these movements “as pseudo-religions, and even replacements and rivals to traditional Christian beliefs,” he said, because “they claim to offer what religion provides.”

A Nov. 12 petition organized by Faith in Public Life and Faithful America and signed by Catholic theologians and about 9,000 grassroots Catholics and ecumenical religious advocates called for the archbishop to apologize for his criticism of such groups, particularly social justice movements, and urged him to support Black activists.

Faith in Public Life is a lobby group focused on influencing state and federal government policies. Faithful America is an online community of Christians putting faith into action for social justice.

The National Black Sisters’ Conference, Pax Christi USA and the Association of U.S. Catholic Priests similarly asked for an apology from Archbishop Gomez.

The Faith in Public Life and Faithful America petition noted that social justice movements that grew in the wake of the police killing of George Floyd “have helped awaken our national conscience to the epidemic of police brutality and systemic racism.”

“Catholic bishops and other religious leaders should be out in the streets with these movement organizers, not demeaning them with language that only emboldens opponents of racial equity,” the petition said.

“Your speech was particularly painful and offensive to Black Catholic advocates in the United States who have organized for racial justice in the face of indifference and even hostility from many white Christians,” it said. “Please apologize for your statements and stand in solidarity with social movements, as Pope Francis has done.”

However, in his address to the Madrid conference, Archbishop Gomez specifically discussed the tragedy of “the killing of George Floyd, an unarmed Black man, by a white policeman” and the many issues this raised.

“For many people in my country, myself included, (Floyd’s) tragedy became a stark reminder that racial and economic inequality are still deeply embedded in our society,” said the prelate, a Mexican American who was born in Mexico.

These new movements are part of a wider “absolutely essential” discussion “about how to build an American society that expands opportunities for everyone, no matter what color their skin is or where they came from, or their economic status,” Archbishop Gomez added.

What he outlined as problematic is that people are increasingly turning to these “woke” movements, rather than religion, for “an explanation for events and conditions in the world,” he said.

“New social movements and ideologies that we are talking about today were being seeded and prepared for many years in our universities and cultural institutions,” he said.

In the U.S., amid the tension and fear created by the pandemic and social isolation, “these movements were fully unleashed in our society” with the killing of Floyd and the protests that followed in many cities, he added.

Signers of the petition included Father Bryan Massingale, a Fordham University theologian and author of “Racial Justice and the Catholic Church”; Miguel Diaz, a former U.S. ambassador to the Vatican and theologian at Loyola University Chicago; Kathleen Dorsey Bellow, director of the Institute for Black Catholic Studies at Xavier University of Louisiana; Patricia McGuire, president of Trinity Washington University; and Father Clete Kiley, chaplain for the Chicago Federation of Labor and board member of the Catholic Labor Network.

“Catholic social justice ministry is not a ‘pseudo-religion’ but a constitutive element of living the Gospel,” said Father Kiley, who added that the archbishop’s comments have “caused hurt and confusion.”

“I hope he can apologize for these remarks and help us all move on to more constructive dialogues,” the priest added.

“The archbishop has an opportunity to start listening to and learning from a new generation of grassroots advocates who put their faith into action,” he added.

“As a faithful Catholic, I pray that Archbishop Gomez will see how his harmful remarks undermine the wisdom that the Black Catholic community and racial justice organizers have to offer us all, along with their potential to renew our country and the world,” said Kyle de Beausset, Catholic organizer and Faithful America board member.

In a Nov. 16 statement released by the National Black Sisters’ Conference, Sister Josita Colbert, a Sister of Notre Dame de Namur, who is the conference’s president, encouraged the archbishop “to rethink” his “ill-advised remarks and rescind them” and invited him to meet with her organization’s leadership.

“If we intend to proclaim the authentic Gospel of Jesus, we must acknowledge our sinfulness as a church as it pertains to the sin of racism and give more than lip service to combating racism in our church and nation,” Sister Colbert said.

Two other prominent Catholics in opinion pieces in Religion News Service and America magazine, respectively, urged Archbishop Gomez’s critics to reexamine his record as a Catholic leader who himself is a person of color and who has spoken out many times on issues of racism and the treatment of immigrant and various marginalized groups in this country.

Both writers suggested his critics had been too rash in their strong criticism of his Nov. 4 address.

Archbishop Gomez is “clearly objecting” to a broader worldview on groups “often explicitly hostile to traditional Christianity,” wrote Charles Camosy in a Nov. 12 article for RNS. He is an associate professor of theological and social ethics at Jesuit-run Fordham University.

Camosy, however, added that he thought the archbishop “could have been more clear about the obvious fact that not every person or organization associated with these new movements, obviously, is responsible for every hostile threat the church has faced.”

In an America opinion piece also dated Nov. 12, Stephen White, executive director of the Catholic Project at The Catholic University of America in Washington, said when Archbishop Gomez — as the head of the nation’s largest archdiocese, an immigrant, a minority and USCCB president — speaks on the issue of racism and social injustice, “it is worth paying attention.”

He pointed to the archbishop’s “long track-record of speaking on these issues in a way that consistently challenges both the injustice of the status quo and the instrumentalization of the faith as a mere means to political ends.”

White said some of the criticism was “measured” and “promised honest engagement” with Archbishop Gomez’s argument.

He said it was fair to say as some did the archbishop “painted the social movements with too broad a brush” and he “gave short shrift to faithful Catholics working to find common cause with these same movements.”

But other criticism was an “unedifying fracas” over Archbishop Gomez’s speech “is a reminder of how the church’s witness to the world is hampered by our own inability to trust one another, even within the church,” White said.