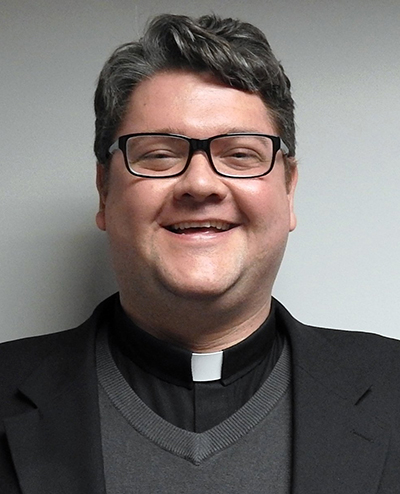 Father Robert McWilliams, 41, a priest of the Diocese of Cleveland, is seen in this undated photo. The former priest was sentenced to life in prison in Akron Federal Court Nov. 9, 2021, after being convicted of several federal charges involving child pornography and the sexual exploitation of children. (CNS photo/courtesy Diocese of Cleveland)

AKRON, Ohio (CNS) — A Cleveland diocesan priest was sentenced to life in prison after being convicted on federal charges involving child pornography and the sexual exploitation of children.

U.S. District Judge Sara Lioi handed down the sentence Nov. 9, saying the public needed to be protected from Father Robert McWilliams, 41, because he had preyed upon youths who turned to him for help.

During a sentencing hearing in U.S. District Court for the Northern District of Ohio, the mother of two sons victimized by Father McWilliams described the priest as “evil incarnate” and that he “hunted and attacked my children.”

The priest apologized to his victims and their family during the hearing. He blamed his actions on an addiction to pornography. “This is not the church or priesthood … this is me,” he said.

Father McWilliams also told the court he had asked the Vatican to be laicized.

The Cleveland Diocese in a statement called for prayer for all those affected by Father McWilliams’ “reprehensible actions” and to ask God to “heal any and all wounds they have suffered.”

“We also thank those in law enforcement and the judicial system who worked so hard to ensure that justice was served and that McWilliams’ wrongdoing was justly punished,” the diocese said.

“Finally, let us offer our support and thanks to all the good priests of the Diocese of Cleveland who faithfully live out their promises each day in service to God’s people. For its part, the diocese continues to actively pursue the removal of McWilliams from the clerical state,” the statement said.

In a sentencing memorandum filed with the court, U.S. Attorney Bridget Brennan detailed the actions of Father McWilliams that led to the charges.

The document said investigators found thousands of images of child pornography on Father McWilliams’ computers, including photos of the boys he came to know while serving as a priest at two parishes in the Cleveland Diocese.

Prosecutors accused the clergyman of meeting victims at St. Helen Church in Geauga County, east of Cleveland. He was later was assigned to St. Joseph Parish in suburban Strongsville, Ohio, where he worked in youth ministry.

Two Geauga County families alerted authorities in October 2019 that their teenage sons were extorted online for sexually explicit images of themselves, leading to an investigation that culminated in the priest’s arrest two months later.