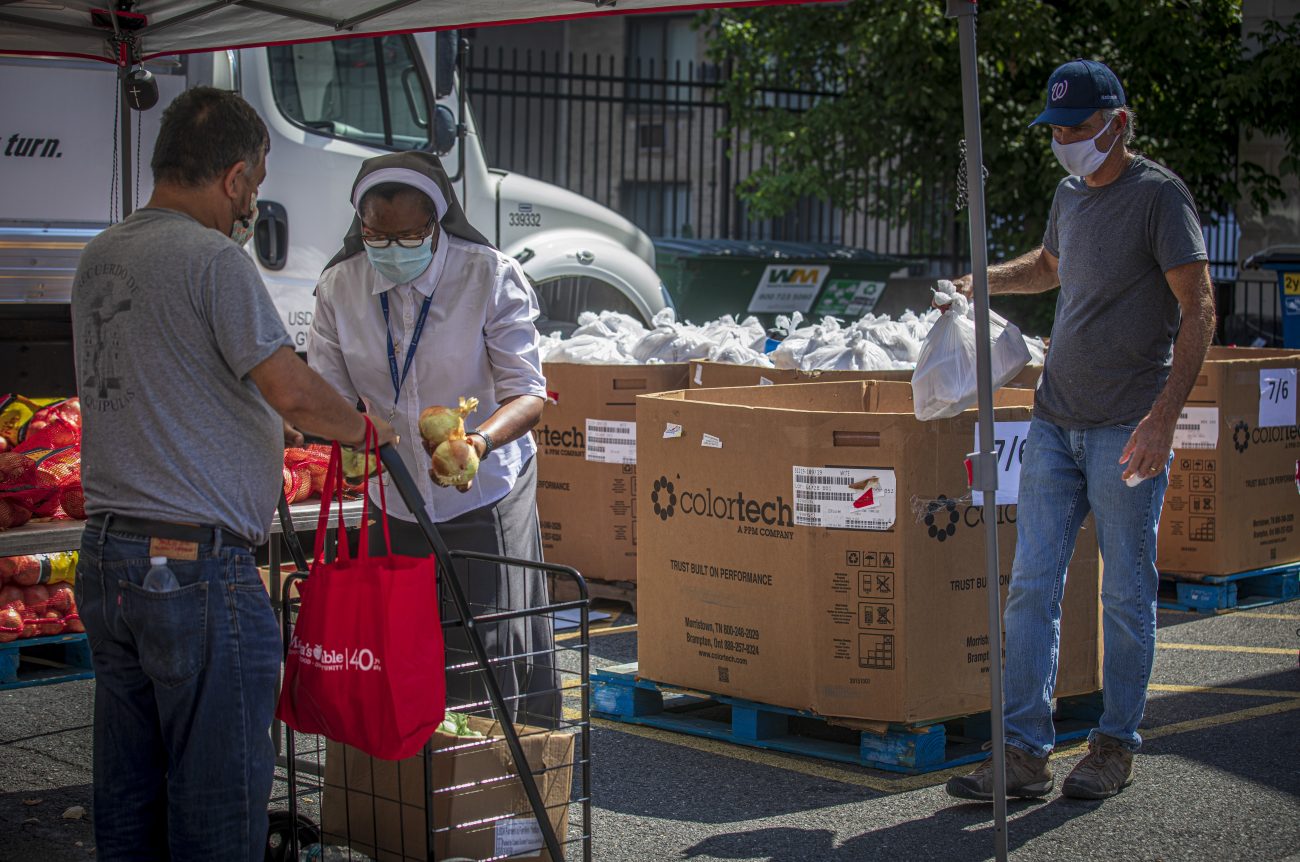 Sister Romana Uzodimma, a Sister of the Handmaids of the Holy Child Jesus, places onions into a man's bag at Catholic Charities' Spanish Catholic Center parking lot in Washington July 15, 2020, where he picked up free food. (CNS photo/Chaz Muth)

BALTIMORE (CNS) — From Haiti to Afghanistan, Catholic Relief Services has demonstrated how it has worked with other Catholic agencies as “one church” to respond to debilitating humanitarian crises around the world, CRS leaders told U.S. bishops gathered for their fall general assembly.

The work has focused on responding to the impact of climate change, natural disasters such as earthquakes, hunger, meager farm production and developing education for children, Bishop Frank J. Caggiano of Bridgeport, Connecticut, president of the CRS board of directors, said Nov. 17 in Baltimore during the second day of public sessions during the Nov. 15-18 meeting.

He said CRS, the U.S. bishops’ overseas humanitarian relief and development agency, seeks to be an agent that provides hope and unity in its programming.

Bishop Caggiano shared the presentation with Sean Callahan, CRS president and CEO, who described a weeklong early November visit to Afghanistan to learn how programs the agency administers are faring since the Taliban regained political power in August.

He also said he wanted to assure local communities that CRS plans to continue its work, as it has for decades.

Meetings with local Taliban leaders were productive and they agreed that CRS efforts to address hunger and deliver clean water in areas of drought were worth keeping in place, he said.

Prior to the presentation, Callahan told Catholic News Service that Taliban leaders assured him that CRS could continue its work unimpeded. That promise included the protection of women who are educating children and helping manage important development programs, Callahan said.

“We’ve got 20,000 children in education right now. Most of them (schools) are run by women, so that’s been good. We’re doing agricultural projects and helping with COVID,” he said.

Callahan described a husband-wife team working as program managers who are overseeing children’s education in an outlying area. “We’re trying to respect the local traditions where the husband goes out with the wife,” he said.

He also summarized work in Ethiopia, where famine is setting in again, as well as in Haiti, which has been wracked by natural disasters, gang violence and shrinking areas of tillable land for farm production.

In another report, Dominican Sister Donna Markham, president and CEO of Catholic Charities USA, said the agency had provided $5.1 billion in assistance in the past year, much of it connected to the economic fallout caused by the COVID-19 pandemic.

Based on the numbers, Catholic Charities institutions constitute the largest social service organization in the United States outside of the federal government, she said.

“This past year has stretched all of us beyond imaging as we have stepped up to address food shortages, evictions, natural disasters, escalating homelessness, the swell of migrants and refugees coming to the U.S., and the pandemic with its resultant national grieving,” Sister Markham said.

To address the need, Sister Markham invited dioceses and parishes to convert underutilized parish and diocesan buildings to help close the gap in the affordable housing shortfall that affects low-income families, senior citizens and military veterans.

“When we are able to repurpose church property, moving it from underutilization or from ‘white elephant’ status, we not only offset the need to alienate (transfer or sell) the property but, more significantly, we are helping vulnerable people experience the compassion of a faith community that care about them deeply,” she said.

A report on the work of the Catholic Campaign for Human Development, the bishops’ domestic anti-poverty program, reviewed the kinds of grassroots work funded by the agency throughout its 50 years.

CCHD has provided more than $440 million through grants to nearly 12,000 community-based organizations since its inception, the bishop said. The goal of funding such efforts is to allow people to decide for themselves how to transform their communities into “places where all can thrive,” he added.

“Our community development grants empower low-income people to gain the ability to organize, identify barriers, research issues, brainstorm solutions and most importantly take action to change problematic structures and systems in their communities,” he said.

Later during a news conference that closed the assembly’s public sessions, Bishop O’Connell responded to a Lepanto Institute report that CCHD organizations are connected with “Marxist groups.”

He said that CCHD thoroughly vets each organization that applies for funding to assure that their work aligns with Catholic teaching.

CCHD “is always conscious of the need to look at every organization we fund to be sure that it is living up to all the challenges of our Catholic social teaching,” he said.

The work of community organizing requires building alliances with different organizations, neighborhood groups and communities to achieve change, he said. If it is discovered that an alliance with an organization violates Catholic teaching, then the affiliation is ended, he said.

“It’s never cut and dried,” the bishop said. “We do review them and hold them accountable.”

NEXT: Get creative as synodal process begins, bishop tells meeting