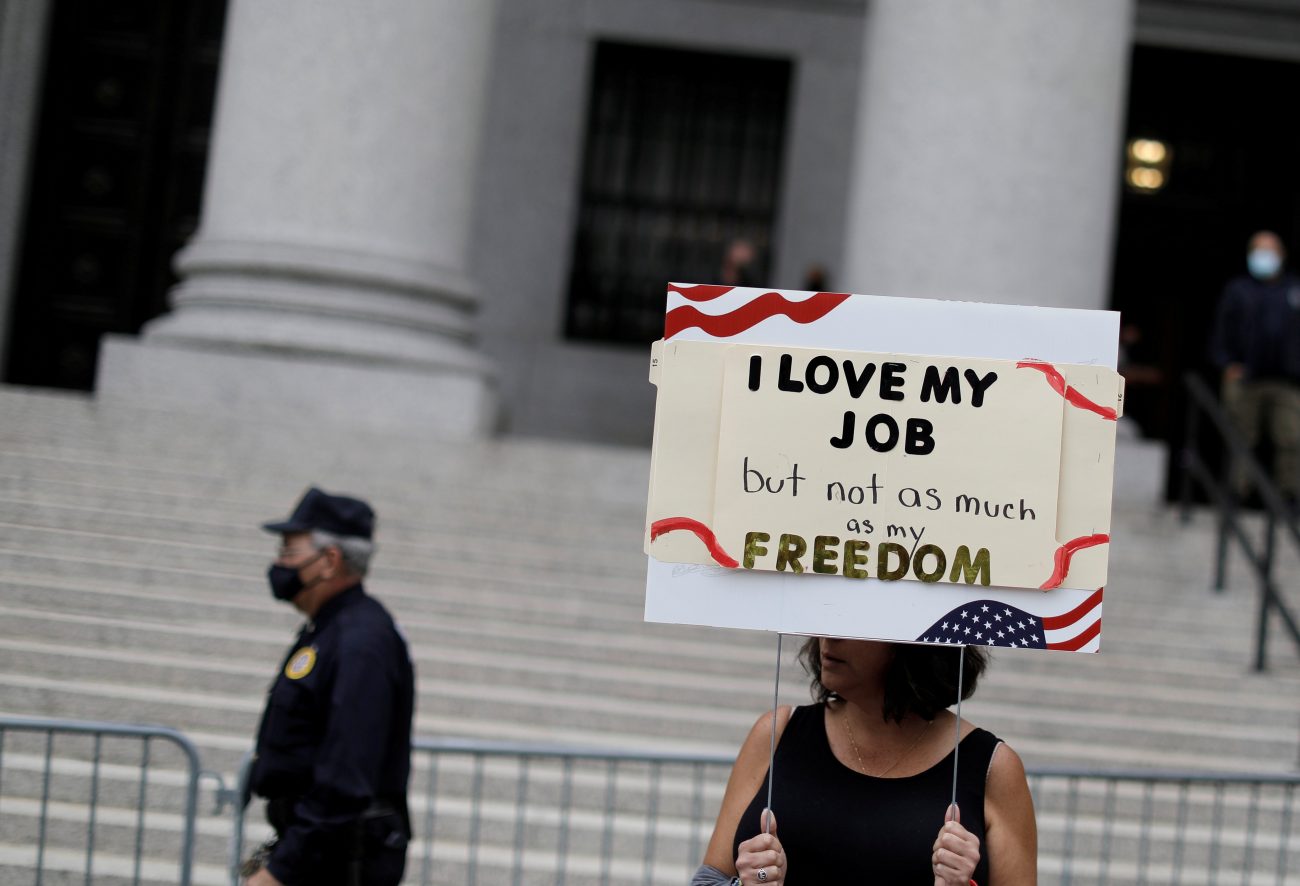 WASHINGTON (CNS) — Religion usually stays out of the workplace, but now with expanding COVID-19 vaccine requirements, employees’ personal faith is front and center as many of them across the country say they have religious reasons not to get vaccinated.

To get a religious exemption, employees have to provide reasons for their claim and sometimes proof of it through a form signed by a church leader. Employers then have to determine whether these beliefs are sincere and if an accommodation for the unvaccinated employee would place an undue hardship on others by posing a direct threat to their health and safety.

Determining sincerity can be complicated because it is so personal. There is no checklist of religions that have come out as completely against the vaccine because no major religion has done so.

Members of different faiths have differing views though and some have raised questions particularly about vaccine mandates. The Biden administration, as part of its “Path Out of the Pandemic” plan, has ordered federal workers, workers at facilities that participate in Medicare or Medicaid and employers with 100 employees or more to require vaccination in the upcoming months.

On Nov. 12, a federal appeals court upheld its previous order temporarily blocking President Joe Biden’s vaccine and testing mandate for large companies; the Justice Department had challenged the court’s block on the mandate.

In the meantime, religious exemption forms are piling up. One religious argument against the vaccine is that it goes against the New Testament passage which describes human bodies as temples of the Holy Spirit.

Another religious argument is a pro-life one, citing a connection the three U.S. vaccines have — in varying degrees — to an abortion-derived cell line.

Statements from both the Congregation for the Doctrine of the Faith and the U.S. Conference of Catholic Bishops have said that current COVID-19 vaccines are morally permissible, but have stressed that Catholics are not obligated to get them.

Some bishops advised Catholics specifically not to get the Johnson & Johnson vaccine, if they had a choice, saying it was linked to an abortion-derived cell line in its development, unlike the Pfizer and Moderna vaccines, which used these lines only in testing phase.

While Pope Francis recommended that people get vaccinated as “an act of love,” which has been echoed by several bishops out of care for the common good, bishops in Colorado, South Dakota and Wisconsin expressed concern about a vaccine mandate’s impact on individuals’ conscience-formed decisions.

The Christian Science church and Jehovah’s Witnesses have said they are not opposed to COVID-19 vaccinations, calling them personal decisions for each individual.

Leaders of the Greek Orthodox Archdiocese of America said there is no religious reason for its church members not to be vaccinated and its clergy members were also urged not to issue religious exemption letters.

In a statement, the church leaders said people should “pay heed to competent medical authorities and to avoid the false narratives utterly unfounded in science.”

Similarly, the three major branches of modern Judaism have released statements in support of COVID-19 vaccinations as did the Assembly of Muslim Jurists of America, which noted the COVID-19 vaccine “is a matter of great importance that goes beyond the interests of individuals to communal ones.”

But while major religious groups are backing the vaccine, a growing number of individuals are getting a spiritual boost to their rejection of the vaccine straight from a federal law.

Title VII of the Civil Rights Act of 1964 says employers must make reasonable accommodations for employees who object to work requirements because of “sincerely held” religious beliefs. Those challenging government-imposed mandates — on public hospital workers and military personnel — look for relief from the First Amendment’s free exercise of religion.

In guidance issued in late October, the Equal Employment Opportunity Commission stipulated that when a person claims a religious exemption, their belief does not have to be recognized by an organized religion, but it can’t be founded on political or social ideas.

This puts the employer in the judgment seat to determine if a person has a legitimate religious belief or a philosophical objection about the vaccine.

In claiming exemptions, employees are sometimes required to show signed letters from church leaders. Templates for these forms are available through the Christian legal advocacy group Liberty Counsel and the National Catholic Bioethics Center, which said this summer it does “not endorse mandated COVID-19 immunization” with the vaccines currently used in the United States.

The center’s form said the “Catholic Church teaches that a person may be required to refuse a medical intervention, including a vaccination, if his or her informed conscience comes to this sure judgment.”

As some Catholics have brought these forms to their pastors to sign, some Catholic leaders across the country have urged priests not to sign them, stressing the importance of getting vaccinated.

In October, Archbishop Timothy P. Broglio of the U.S. Archdiocese for the Military Services said: “No one should be forced to receive a COVID-19 vaccine if it would violate the sanctity of his or her conscience.”

With rules about religious exemptions for COVID-19 vaccines varying among religious leaders and by state and institutions, people are turning to the courts for some direction.

In late August, a federal district court ruled in favor of the University of Massachusetts in a suit filed against the school by a Catholic student for denying her a religious exemption to the vaccine requirement. An administrator told her the vaccine did not violate her faith, citing a statement from the U.S. Conference of Catholic Bishops that said the vaccines were “morally justified.”

The great divide over these types of cases may ultimately need to be decided by the Supreme Court.

This fall, the court allowed a vaccine mandate for health care workers in Maine to remain in effect, rejecting an emergency appeal from some of the employees seeking a religious exemption.

Although the one-sentence order issued Oct. 29 did not give an explanation, the justices expressed their views in separate writings.

Justice Neil Gorsuch, in an eight-page dissent joined by Justices Clarence Thomas and Samuel Alito, said that he would have agreed to the request of the state’s health care workers, noting that many other states have religious exemptions in place for health care workers.

He said the firing of workers and shutting down of health care practices for noncompliance with the vaccine mandate is “worthy of our attention” because those seeking a religious exemption are “adhering to their constitutionally protected religious beliefs.”

He also said the state’s refusal to grant religious exemptions “borders on the irrational.”

New York and Rhode Island are the only other states with vaccine mandates for health care workers that do not have religious exemptions, and both of these mandates are currently being fought in lower courts.

On Oct. 29, a federal appeals court panel upheld New York’s vaccine mandate for health care workers, rejecting an appeal that the mandate should have a religious exemption.

The nation’s high court has turned away other challenges seeking emergency relief from COVID-19 vaccine mandates including a challenge by students from Indiana University and from public school employees in New York City. Both of these mandates had religious exemptions.

Mat Staver, Liberty Council’s founder and chairman who represented the Maine workers, said he would file a petition asking the Supreme Court to review the health workers’ plea on it merits.

“This case is far from over,” he said.