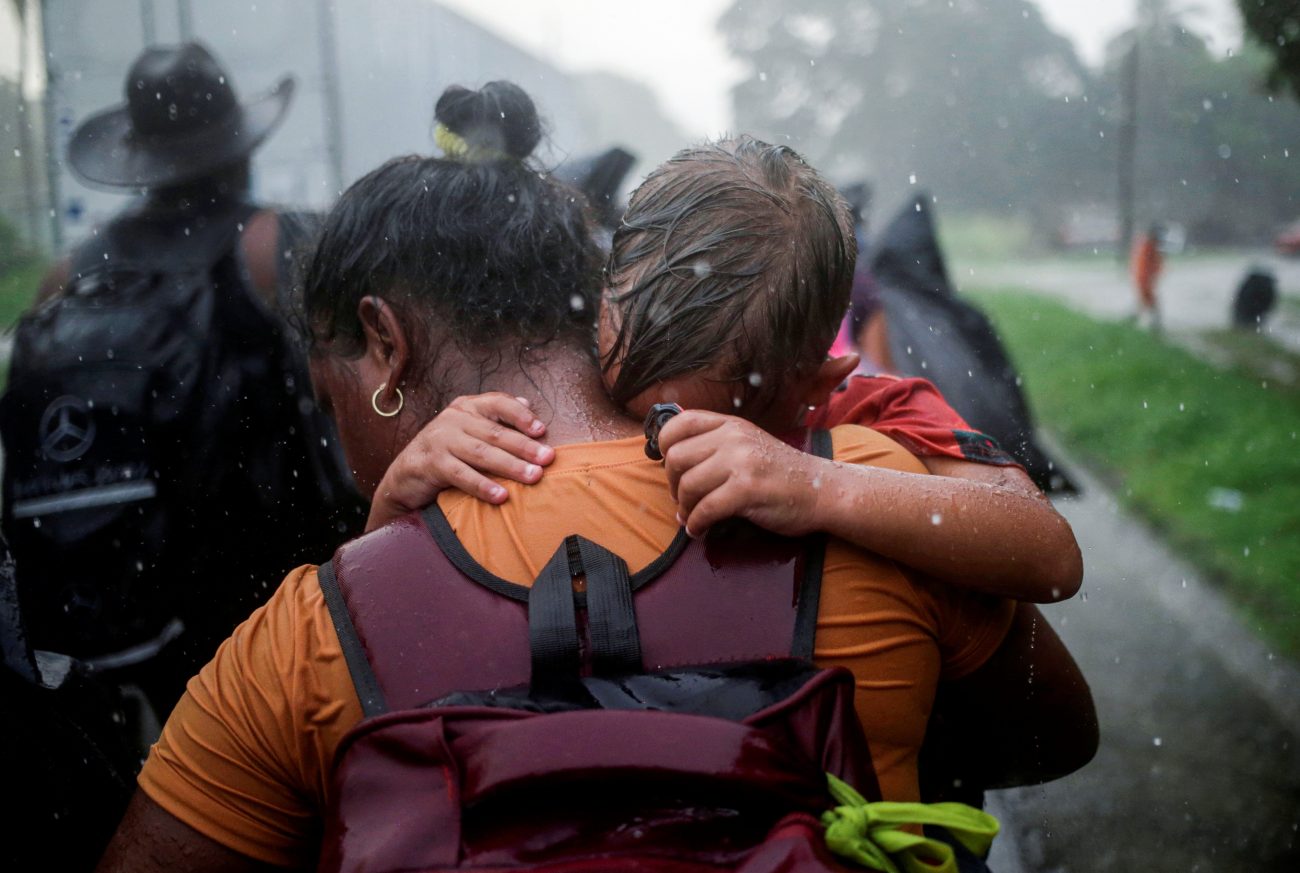 A migrant woman in Acacoyagua, Mexico, carries her boy in the rain Oct. 29, 2021, as they walk in a caravan heading to Mexico City. (CNS photo/Daniel Becerril, Reuters)

WASHINGTON (CNS) — U.S. Homeland Security Secretary Alejandro Mayorkas submitted a lengthy document Oct. 29 that he hopes will lead to the eventual end of a policy designed to keep asylum-seekers to the U.S. on the Mexico side of the southern border until their cases are heard.

“This administration is tackling long-standing problems that have plagued our immigration system for decades in order to achieve needed systemic change. MPP does not help meet this goal,” wrote Mayorkas, referring to the Migrant Protection Protocols, popularly known as MPP.

The policy, also known as “Remain in Mexico,” was put in the place during the Trump administration. Biden administration officials tried to end it in June of this year.

However, a judge with the U.S. District Court for the Northern District of Texas told administration officials in August to continue complying with the policy, saying they had not ended it properly.

The U.S. Supreme Court upheld the judge’s ruling and ordered the Biden administration to reinstate it. The administration had begun making steps to do so by mid-November.

But Mayorkas extensively explained in the new document the administration’s justification for wanting to end the policy, adding that “no amount of resources” can fix the problems it presents.

“MPP had endemic flaws, imposed unjustifiable human costs, pulled resources and personnel away from other priority efforts, and did not address the root causes of irregular migration,” he said.

“MPP not only undercuts the administration’s ability to implement critically needed and foundational changes to the immigration system,” he added, “it fails to provide the fair process and humanitarian protections that individuals deserve under the law.”

Catholic groups, including bishops, who work with migrants objected to the administration’s stance that it had no choice but to continue implementing the policy based on the judge’s orders.

In an Oct. 29 news release, the Catholic Legal Immigration Network said the Department of Homeland Security’s document, referred to as a memo, came after “repeated and urgent calls from immigrant rights advocates and legal experts for the administration to use their authority to end the program.”

“As an organization grounded in Catholic social teaching, our message to the administration has been clear: People fleeing to protect their lives and the lives of their families have a right to seek asylum in the United States. It is our legal and moral duty to welcome them and offer hospitality,” said Anna Gallagher, CLINIC’s executive director.

“We are grateful that the administration is taking further steps to reverse this degrading and life-threatening policy,” she said. “We look forward to working closely with the administration and our partners to ensure that our immigrant brothers and sisters are received with dignity.”

“This policy has caused incalculable harm to thousands of asylum-seekers and functionally suspended the regular asylum process since it was first implemented in 2019,” said Giulia McPherson, the organization’s director of advocacy and operations.

“By issuing this new memo, the Biden administration is taking an important next step in reversing an August court ruling that reinstated MPP after attempting to terminate the program earlier this year,” she said. “We urge the Biden administration to continue its efforts to terminate MPP and to take every action possible to oppose reinstatement of this harmful policy.”

On its website, DHS says the administration “remains under a court order requiring it to reimplement MPP in good faith, which it will abide by even as it continues to vigorously contest the ruling.”

Biden administration officials continue talks with Mexico, which must cooperate by taking in migrants on its territory.

“As part of these efforts, DHS is engaged in ongoing and high-level discussions with (the) Mexican government and has issued contracts to build temporary court facilities in Texas. MPP cannot be reimplemented, however, unless and until the government of Mexico makes an independent decision to accept returns under the program,” DHS said on its website.

“The termination of MPP will not take effect until the current injunction is lifted,” it added.

The chairman of the U.S. bishops’ Committee on Migration also welcomed the new action by the administration to terminate MPP, “given the well-documented harms and injustices” he said the policy has caused.

“We pray that this unfortunate chapter in American history will finally come to a close,” said Auxiliary Bishop Mario E. Dorsonville of Washington in a Nov. 2 statement.

He noted that earlier this year the U.S. Conference of Catholic Bishops had filed a friend-of-the-court brief with the Supreme Court arguing that MPP is contrary to domestic and international law, as well as Catholic social teaching.

Bishop Dorsonville also urged the Biden administration to end the use of Title 42, a provision of U.S. health policy enforced during the Trump administration that turns away certain immigrants at the border as part of public health measures to contain the coronavirus.

“While Catholic social teaching affirms a sovereign nation’s right to regulate its borders, the church’s commitment to the sanctity of human life transcends these boundaries. It is possible to maintain borders with justice and mercy,” the bishop said.

“We must work toward an immigration system that better promotes human dignity, not only for the benefit of those seeking protection but for the common good, upon which we all depend,” he added.