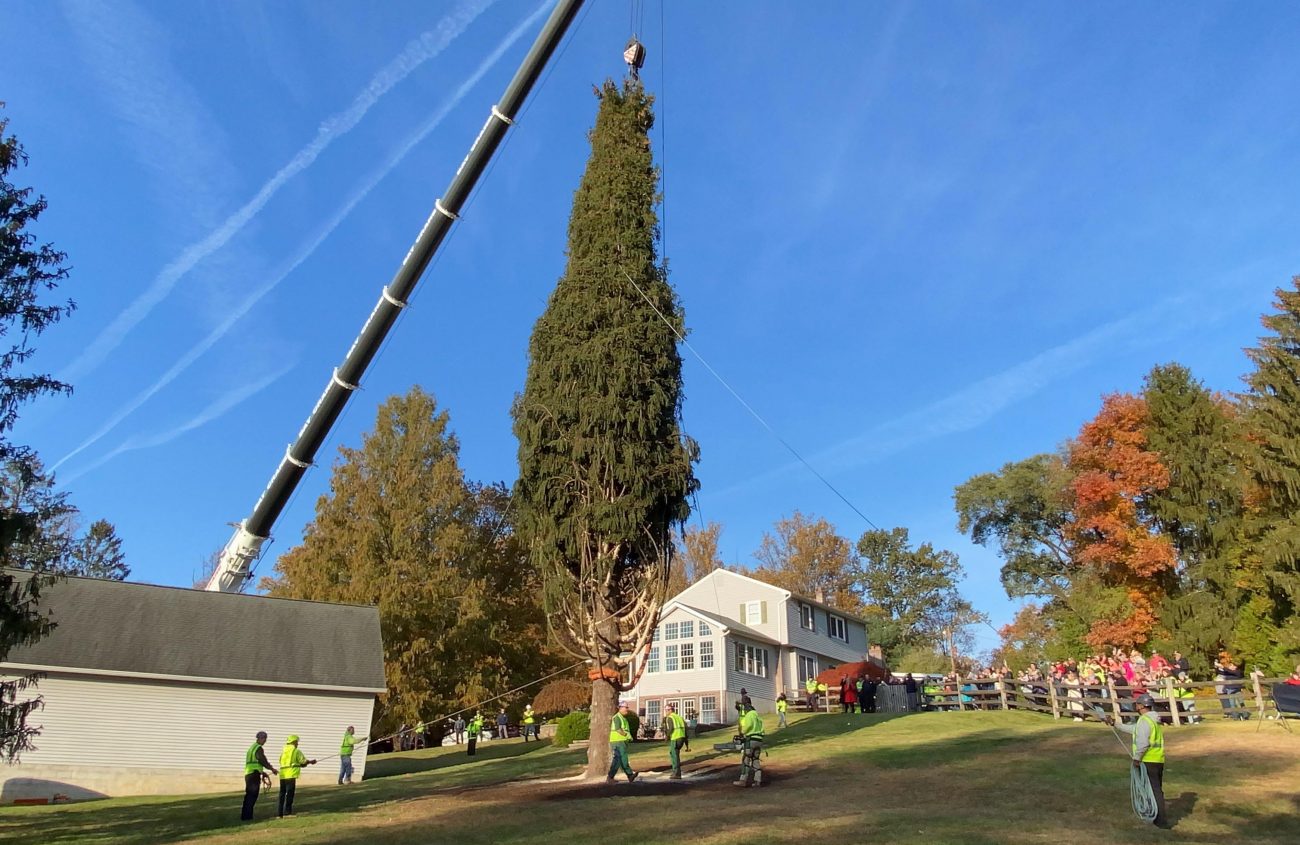 A crane and several ropes hold a Norway spruce in place before it is cut down in Fair Hill, Md., Nov. 11, 2021, to be taken on a flatbed truck to New York City. It arrived at Rockefeller Center in New York Nov. 13 and will be this year's Christmas tree in midtown Manhattan. (CNS photo/Mike Lang, The Dialog)

FAIR HILL, Md. (CNS) — The normally sleepy streets of Cecil County, Maryland, near the University of Delaware and White Clay Creek State Park were buzzing with activity the morning of Nov. 11, as one of the most iconic holiday symbols in the United States began its journey.

Hundreds of spectators, media and workers descended on the home of Devon and Julie Price, parishioners at Immaculate Conception Church in Elkton, Maryland, to watch as a 79-foot-tall, 46-foot-wide Norway spruce was cut down and removed from their property.

It was placed on a flatbed trailer bound for New York City, where it arrived Nov. 13 and was raised as the Christmas tree at Rockefeller Center. It will be adorned with 50,000 lights and topped by a star, with the lighting ceremony scheduled for Dec. 1.

“We’re very excited for that,” Julie Price said. “Actually, a lot of our neighbors have told us that they’ll be going to New York City to see the tree, so that’s exciting.”

The Prices were inundated with interview requests as their friends and neighbors watched from their yard and along narrow Hillwood Avenue, where the family has lived for 30 years. Devon Price said it’s an honor to have a tree that he has nurtured symbolize the season of Jesus’ birth for the entire nation.

“The decision to let it go to New York City to bring joy and happiness to millions of people — when we started off, we were reluctant, but obviously it’s the right decision for a better purpose for the tree than standing in the yard,” he said.

He said Christmas has always been a special occasion for his family, which includes a son and daughter.

“It’s real festive, really always a big deal. A lot of decorations, a lot of presents, a lot of giving and a lot of family time,” he told The Dialog, the newspaper of the Diocese of Wilmington, Delaware, which includes several Maryland counties. 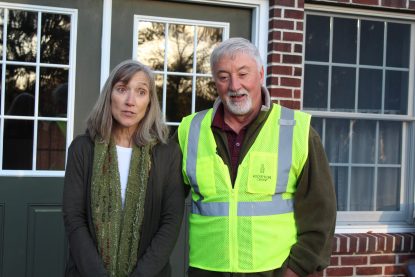 Julie and Devon Price, parishioners at Immaculate Conception Church in Elkton, Md., speak to the media outside their home in Fair Hill, Md., Nov. 11, 2021. They donated a 79-foot-tall Norway spruce to be used this year as the iconic Christmas tree at Rockefeller Center in New York City. (CNS photo/Mike Lang, The Dialog)

The Prices always have had a live tree, but never one from their own property, which includes several acres. Theirs were always too big, he said.

His daughter, Natalie Longo, traveled from her home in north Wilmington to catch the action. She said the entire process has been “unreal.”

Devon Price said the selection of the Norway spruce began in March with a knock on his door. It was Erik Pauze, the head gardener at Rockefeller Center.

“He just knocked on our door, and he said, ‘Hey bud, how are you doing?’ Honest to God, we thought he was a salesman. Julie said, ‘I think it’s a salesman. You go answer it,'” Price said.

Pauze was on hand Nov. 11 to oversee the removal of the tree from the yard. It had been tied up, and several workers held ropes to prevent it from falling once the chain saw had gotten through the trunk.

He said back in March he had been in southern New Jersey scouting trees at a nursery for a park being built on top of Rockefeller Center, and he decided to stick around the area instead of heading back to New York. 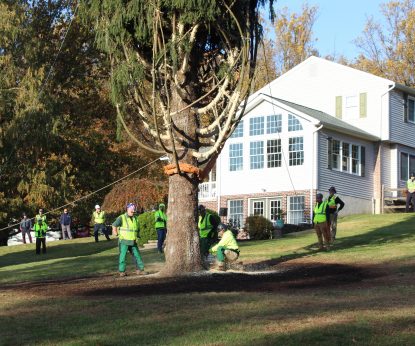 Workers in Fair Hill, Md., cut a 79-foot-tall Norway spruce Nov. 11, 2021, to be used as the iconic Christmas tree this year at Rockefeller Center in New York City. The tree, which arrived by flatbed truck in midtown Manhattan Nov. 13, was donated by Devon and Julie Price. (CNS photo/Mike Lang, The Dialog)

He happened upon the Price property and walked around taking photographs from different angles.

“When I drove by it, I went around the corner, drove to the other side of the tree. When I got out of the car, I knew right away that this was the tree,” he said. “This is going to be just as beautiful as all the other ones.”

Devon Price said there was some initial reluctance to let go of the tree.

“We watched it grow and took care of it. The decision to let it go to New York City was a hard one, but at the end of the day, we’ve taken down a number of these large trees. This one’s in its prime, so we thought we’d let it go for a better purpose before it starts to decline,” he said.

The family got a ride to New York to see the tree raised, and they may be there for the tree lighting.

“It’s a donation to Rockefeller Center and the world,” Pauze said.

Lumber from the tree will be donated to Habitat for Humanity once the holiday season is over.

Longo said growing up Catholic, she knows the importance of the Christmas season around the country and the world. She anticipates the tree she played under as a child will be a part of other people’s milestones, such as birthdays, proposals and bucket-list trips.

“I hope it brings a lot of joy to everybody,” she said. 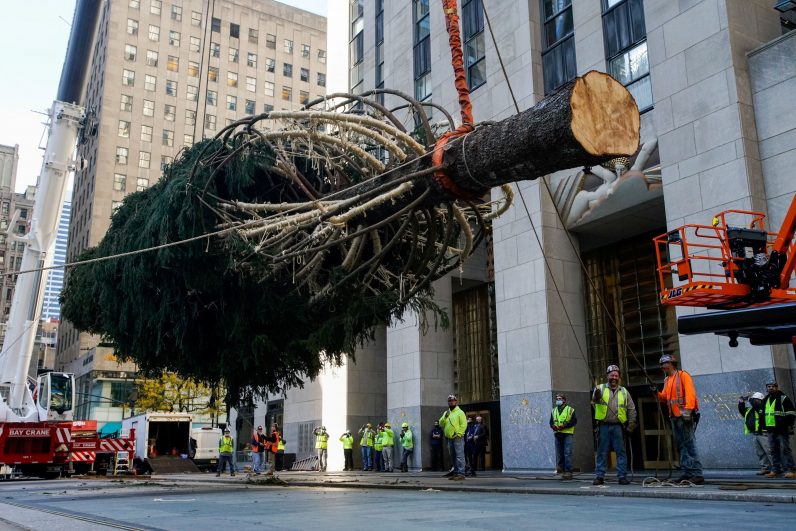 NEXT: Synod on synodality should not avoid problems, archbishop says in homily