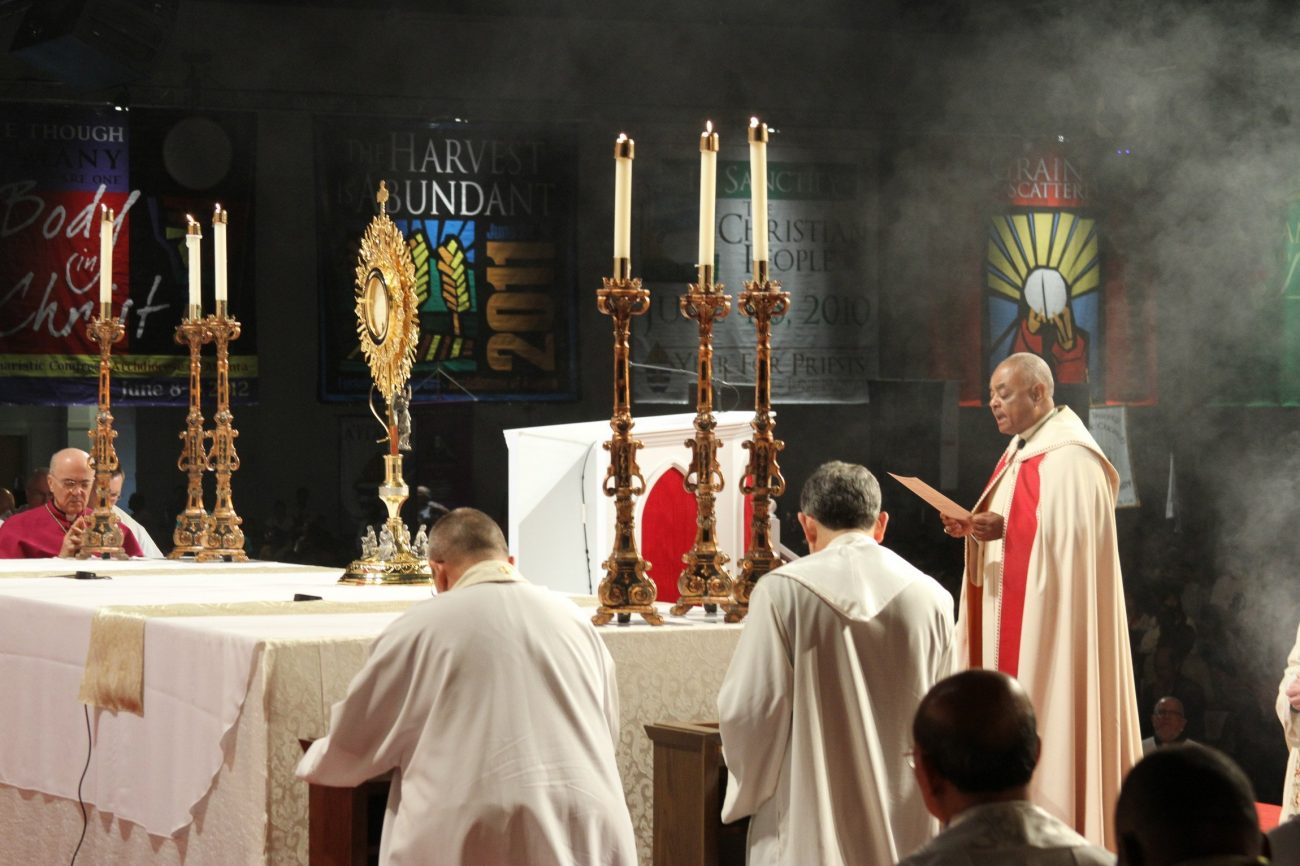 WASHINGTON (CNS) — The U.S. bishops Nov. 17 approved a fresh version of ritual texts dealing with the distribution and reception of Communion outside Mass during their fall general meeting in Baltimore.

The original Latin text was issued in 1973 and a translation approved by the bishops in 1976.

The vote was 200-14 with four abstentions. Approval was needed by two-thirds of the Latin-rite bishops. The vote requires a subsequent “confirmatio” by the Vatican Congregation for Divine Worship and the Sacraments.

The collection of rites and rubrics is called “Holy Communion and Worship of the Eucharistic Mystery Outside Mass.” It was introduced as part of the bishops’ agenda Nov. 16, the first of two days of public sessions during their Nov. 15-18 fall assembly.

“Interestingly, the typical edition provides little direction for exposition and Benediction, making only generic references to hymns, prayers, readings and acclamations that can be used,” said Archbishop Leonard P. Blair of Hartford, Connecticut, chairman of the bishops’ Committee on Divine Worship, in an introductory message to his fellow bishops.

“This flexibility can be helpful when there are special events, retreats and extended periods of adoration, and various publishers have prepared resources with models of these kinds of celebrations,” Archbishop Blair said.

The general introduction to this collection of rites and rubrics says: “It will be for the conferences of bishops to consider carefully and prudently which elements, if any, of poplar traditions should be retained or admitted, provided they can be reconciled with the spirit of the sacred liturgy.”

The International Commission on English in the Liturgy delivered its “gray book” translation from the original Latin to bishops’ conferences in English-speaking countries in April 2020.

Since then, the U.S. bishops’ Committee on Divine Worship made “a few other minor adaptations” to the ritual that it was recommending to the bishops. These include:

— Allowing priests and deacons to wear a cope during exposition of the Eucharist, not only during Benediction as mentioned in the Latin original.

— Censing of the Eucharist during Benediction.

— The possibility of singing a hymn after Benediction. The ritual book mentions only an “acclamation,” and in many English-speaking countries, according to Archbishop Blair, the hymn “Holy God, We Praise Thy Name” is often sung then.

Bishop Mark J. Seitz of El Paso, Texas, argued — ultimately unsuccessfully — to have rites practiced in the United States more closely mirror those used in much of the rest of the world.

“We sometimes cling to traditions with a small ‘t,'” Bishop Seitz said. “This is an opportunity … to come into conformity with the rest of the church,” he added, “which has stood the the of time in the rest of the world.”

“It was the mind of the committee that we’re not invoking the tradition in the formal sense,” Archbishop Blair replied, “as much as we’re describing it as customary in the United States.”

He added that the church in Italy and Mexico is “operating out of books that have the approval of the Holy See” yet they order Benediction and exposition in the same place as the United States. “Not that there is a set, established pattern for the world. The Holy See has acknowledged doing it the way that we are doing.”

“This cult of adoration is based on firm and solid reasoning, above all, because faith in the real presence of the Lord leads naturally to the external and public expression of that faith,” says the general introduction to the rites and rubrics document.

“The most holy Eucharist should be reserved in a tabernacle that is irremovable, solid, and not transparent, and locked in such a way that the danger of profanation is prevented to the greatest extent possible,” it adds.

In the first chapter, “Holy Communion Outside Mass,” it reads: “The faithful should be encouraged to receive Communion during the eucharistic celebration itself. Priests, however, should not refuse to give holy Communion to the faithful who for a just cause seek it, even outside Mass.”

In the third chapter, “Various Forms of Worship of the Most Holy Eucharist,” the text says: “When arranging pious and holy exercises of this kind, account should be taken of the liturgical seasons, so that these exercises are in harmony with the sacred liturgy from which, in a sense, they derive, and may lead the people back to it.”

Catholics, it adds, “should strive, therefore, to lead their whole life gladly in the strength of the heavenly food, as they participate in their whole life gladly in the death and resurrection of the Lord. Everyone, therefore, should be careful to perform good works and to please God, so as to imbue the world with the Christian spirit and to become a witness to Christ in the midst of human affairs.”

Extended exposition of the Eucharist, the document says, “should take place once a year, even if not strictly continuously, so that the local community may meditate on and adore the mystery more profoundly.”

It adds, “When, for want of ample numbers of worshipers, uninterrupted exposition is not possible, the most Blessed Sacrament may be placed back in the tabernacle, at times scheduled and announced beforehand, but not more often than twice a day, for example, about midday and at night.”

NEXT: Communion statement aims to ‘retrieve and revive’ understanding