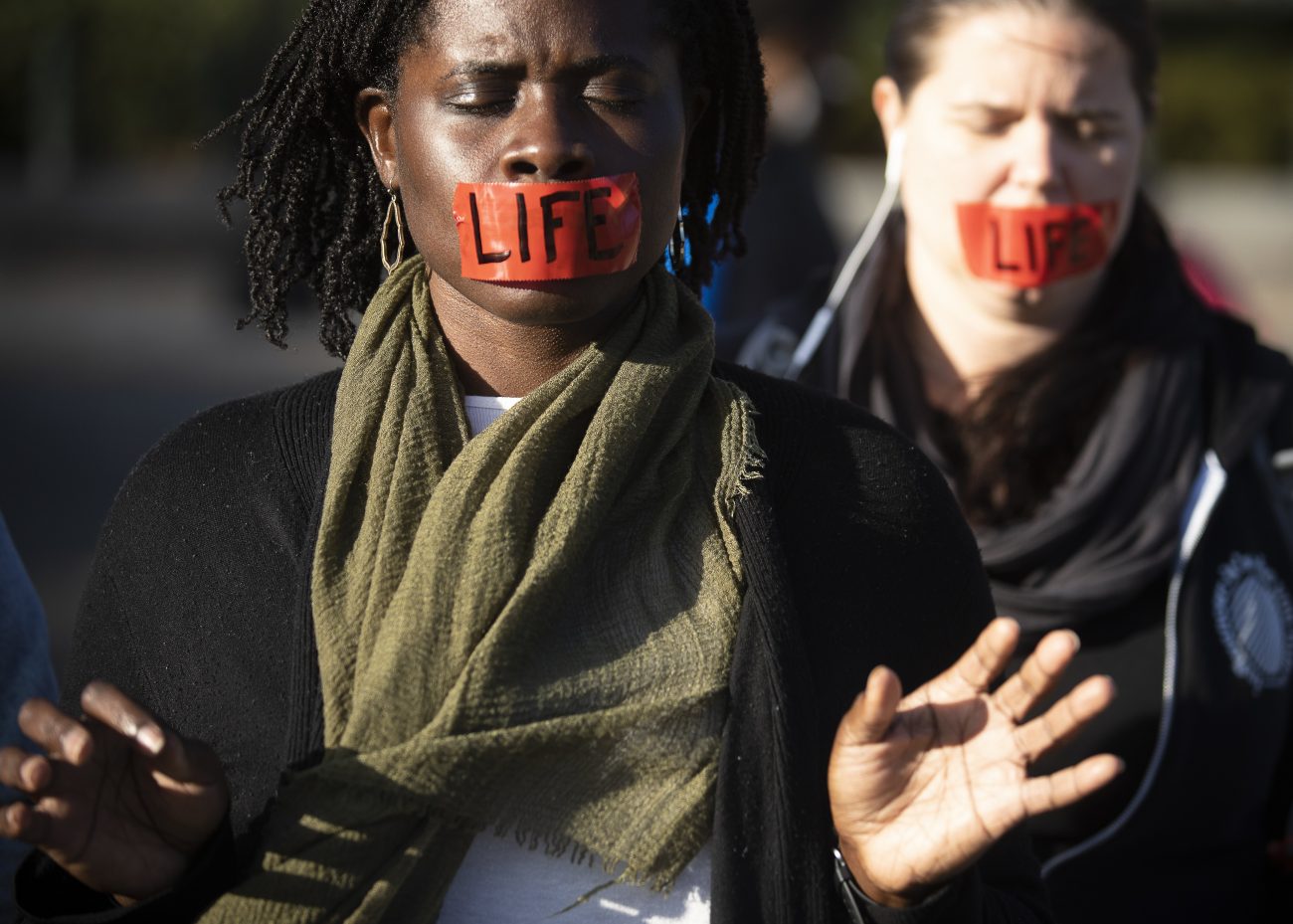 WASHINGTON (CNS) — During oral arguments just shy of three hours Nov. 1, the Supreme Court closely examined — and seemed to have concerns about — how the new abortion law in Texas was framed and is enforced.

The justices were specifically considering if the Justice Department and if abortion providers in Texas can challenge the Texas abortion law in federal court. The law, in effect since Sept. 1, bans most abortions after six weeks of pregnancy and allows individuals to sue anyone involved in helping a woman obtain an abortion.

Among the justices who expressed some unease with the law’s framing were Justices Brett Kavanaugh and Amy Coney Barrett, which could lead to a narrow ruling to enable the lawsuits against the abortion law to proceed.

Such a ruling would not address the broad scope of the law’s constitutionality but would return the cases to lower courts.

Many of the justices’ comments during two back-to-back cases acknowledged this is a new challenge to face court but they drew on one case in particular for some guidance. Many brought up Ex Parte Young, a 1908 Supreme Court case that said state officials could be sued in federal court to prevent them from trying to enforce unconstitutional laws.

Kavanaugh said Texas had exploited a “loophole” in the abortion law preventing it from being challenged in federal court. And Barrett pointed out that the way the law’s enforcement mechanism was designed — preventing defendants from arguing about the undue burden placed on them — seemed in conflict with the court’s previous abortion rulings.

When Kavanaugh asked if states could enact similar laws limiting other constitutional rights, like gun rights under the Second Amendment and free speech rights under the First Amendment, Judd Stone II, solicitor general of Texas, said such laws could not be challenged in federal court either.

Stone emphasized that neither the federal government nor the abortion providers had legal grounds to sue the state in federal court.

In the first set of arguments, Marc Hearron, a lawyer for the Center for Reproductive Rights, argued that the Supreme Court should issue an injunction against Texas state court clerks, preventing them from accepting lawsuits against abortion providers and those who assist women seeking abortions.

He also said the way the state’s law is enforced will have a “chilling effect” by encouraging repetitive lawsuits that would put defendants at risk of $10,000 judgments plus attorney fees.

In the second set of arguments, Elizabeth Prelogar, solicitor general of the United States, emphasized that Texas should not be allowed to evade previous Supreme Court rulings on abortion through its law that evades judicial review.

“I recognize that this is a novel case,” she said, adding: “That’s because it’s a novel law.”

The Nov. 1 argument was the third time the court considered the Texas abortion law agreeing to emergency requests filed by the Department of Justice and the abortion providers’ challenge to the state’s abortion law.

On Sept. 1, the court ruled against blocking the Texas abortion law and on Oct. 22 it said the law would remain in effect before it would get its expedited review Nov. 1.

Just prior to November’s oral arguments, John Seago, legislative director of Texas Right to Life said his organization was “optimistic” about the outcome of the case.

“Not only have the justices continued to show judicial restraint by allowing the law to continue to save lives, but they are committed to taking these procedural and standing questions seriously, unlike the federal district court. We are hopeful the justices will clarify that these current legal attacks on this life-saving law are invalid,” he said in a statement.

On Dec. 1, the court will take up a broader abortion case, examining Mississippi’s  ban on abortion after 15 weeks of pregnancy.

When the Supreme Court first ruled against blocking the Texas abortion law, the Texas Catholic Conference, the public policy arm of the state’s Catholic bishops, said this action marked the first time since Roe v. Wade that the nation’s high court “has allowed a pro-life law to remain while litigation proceeds in lower courts.”

PREVIOUS: Cardinal: Protecting human life at all stages is more important than ever