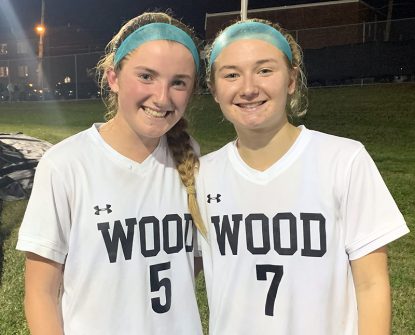 A maniacal global pandemic eliminated any possible fruition of those plans.

“This has been our goal,” said Wood coach Tom DeGeorge. “I thought we had a good shot at it last year. I’m so happy for these girls.”

DeGeorge was particularly pleased for two Wood players – daughters Alyssa and Ava, a senior and sophomore, respectively. Both of them played a pivotal role in seizing Wood’s first PCL title since 2016.

With the score tied 1-1 following first-half goals by Ryan first-team All-Catholic sophomore Gianna Rivera and Wood senior Meghan Matthews, a corner kick by Ava DeGeorge was met by a pack of aggressive Vikings, including sister Alyssa, who appeared to have headed the ball into the cage for the eventual game-winner.

“I’ve been coaching her since she was 8,” said Tom DeGeorge, “and that might be her first head ball.”

Upon further review, Alyssa DeGeorge – who was named the PCL’s Most Valuable Player on Nov. 4 – still hasn’t used her head to redirect a soccer ball. She said the ball actually went off her face.

Didn’t matter. Wood had a 2-1 lead with less than 30 minutes remaining in regulation.

The Vikings, the only outfit that Ryan was unable to defeat during the regular season (both teams finished 7-0-1, including a 1-1 double-overtime on Sept. 25), increased their lead to 3-1 on Matthews’ second goal – and Ava DeGeorge’s second assist via a perfectly placed corner kick.

“It’s just being in the right place at the right time,” said Matthews. “It comes down to being prepared and giving it all you got. At 2-1, it is so close. They can just tie it up and get it to overtime. Going up 3-1 gave us even more confidence and got the momentum going in our favor.” 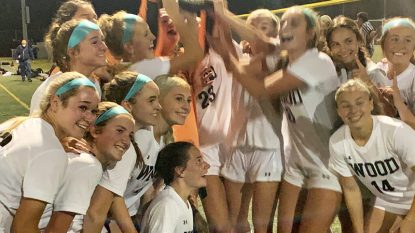 By scoring three goals against a Ryan team that previously had only allowed two in its nine PCL contests, only 17 minutes, 48 seconds separated the Vikings from a coveted PCL crown. Despite a two-goal lead, however, the Vikings were in no rush to celebrate.

“Ryan scored three goals within five minutes in their (5-1) semifinal win over St. Hubert’s,” said first-team All-Catholic senior goalie Bella Diodato. “That was still going through my head. I know they can do that. They have a lot of great players on that team.”

There would be no such comeback, nor any real drama. The Vikings kept the Ragdolls out of harm’s way until the clock showed all zeroes.

“When I was in eighth grade and Alyssa was playing in the final, I hoped that I could play with her one day and be able to win a championship with her,” said Ava DeGeorge, a first-team All-Catholic. “We go to the field and practice a lot. It’s all worth it.”

“It’s so special to share this with my sister,” she said. “Winning this with her means a lot to me. I’m so happy, and I’m so relieved. I knew this was our year.”

Senior Jake Barton scored twice for the Explorers, including the game-winner late in the second half.

“When you think about how many great teams are in the Catholic League, this is a great accomplishment,” said Barton. “It took a lot of hard work from everybody to make this happen.” 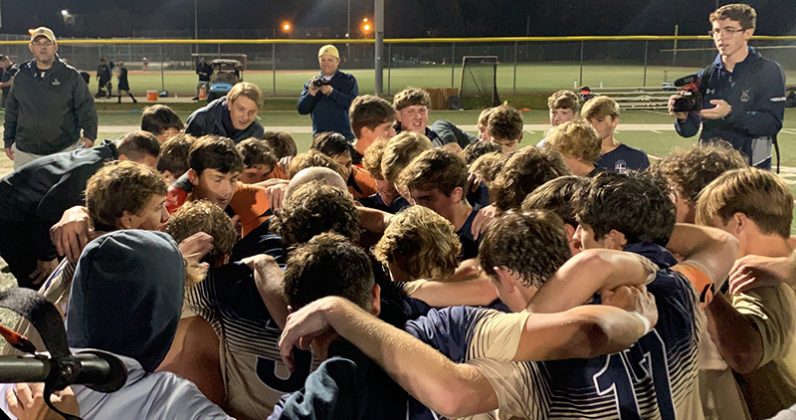