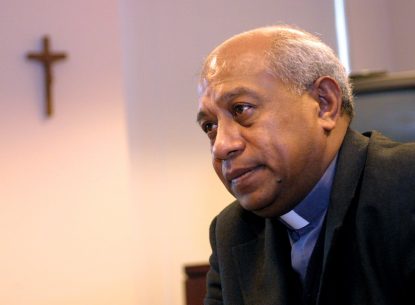 Bishop Basilio do Nascimento of Baucau, East Timor, is pictured in a 2003 photo during a visit to Washington. Bishop do Nascimento died at the age of 71 Oct. 30, 2021, at Nacional Guido Valadares Hospital in Dili, following a heart attack.(CNS photo/Mary Knight)

Ucanews.com reported Guterres said the Order of Timor-Leste was being given to the bishop “for his dedication to humanity and his courage,” especially during the country’s struggle for independence.

“It is important to make this public acknowledgment … for the dedication and courage shown by Bishop Basilio do Nascimento at certain moments in the struggle for the liberation of our motherland,” the president said in a decree issued Nov. 2.

He also cited the bishop’s contribution to “promoting Christian values and principles in defending civilization for the sake of human dignity.”

Guterres specifically mentioned how the bishop had held a secret meeting with rebel leaders during the struggle for independence from Indonesia, a move he classified as a “bold act.”

The Order of Timor-Leste was introduced in 2009 to show recognition to those who made significant contributions to the struggle for independence and for those who contribute to humanitarian work, ucanews.com reported.

Bishop do Nascimento, the country’s most senior bishop, was a key figure in the period before the 1999 independence referendum, with his comments on the situation in East Timor regularly were sought by journalists.

He spoke out both before and after the August 1999 vote for independence, as anti-independence militia gangs backed by the Indonesian army went on a rampage, killing up to 2,000 civilians, burning and looting houses and driving 250,000 people from their homes.

The United Nations then put a transitional administration in place to prepare for independence, which became official in May 2002.

About 98% of East Timor is Catholic, but Bishop do Nascimento worked to build bridges with the Muslim minority.

In a visit to the United States in 2003, the bishop told Catholic News Service that a fledgling, undeveloped judicial system and lack of human resources had delayed the progress of justice in East Timor.

His body currently lies at St. Anthony’s Cathedral in Baucau, where parishioners have been paying their respects before his funeral Nov. 4.