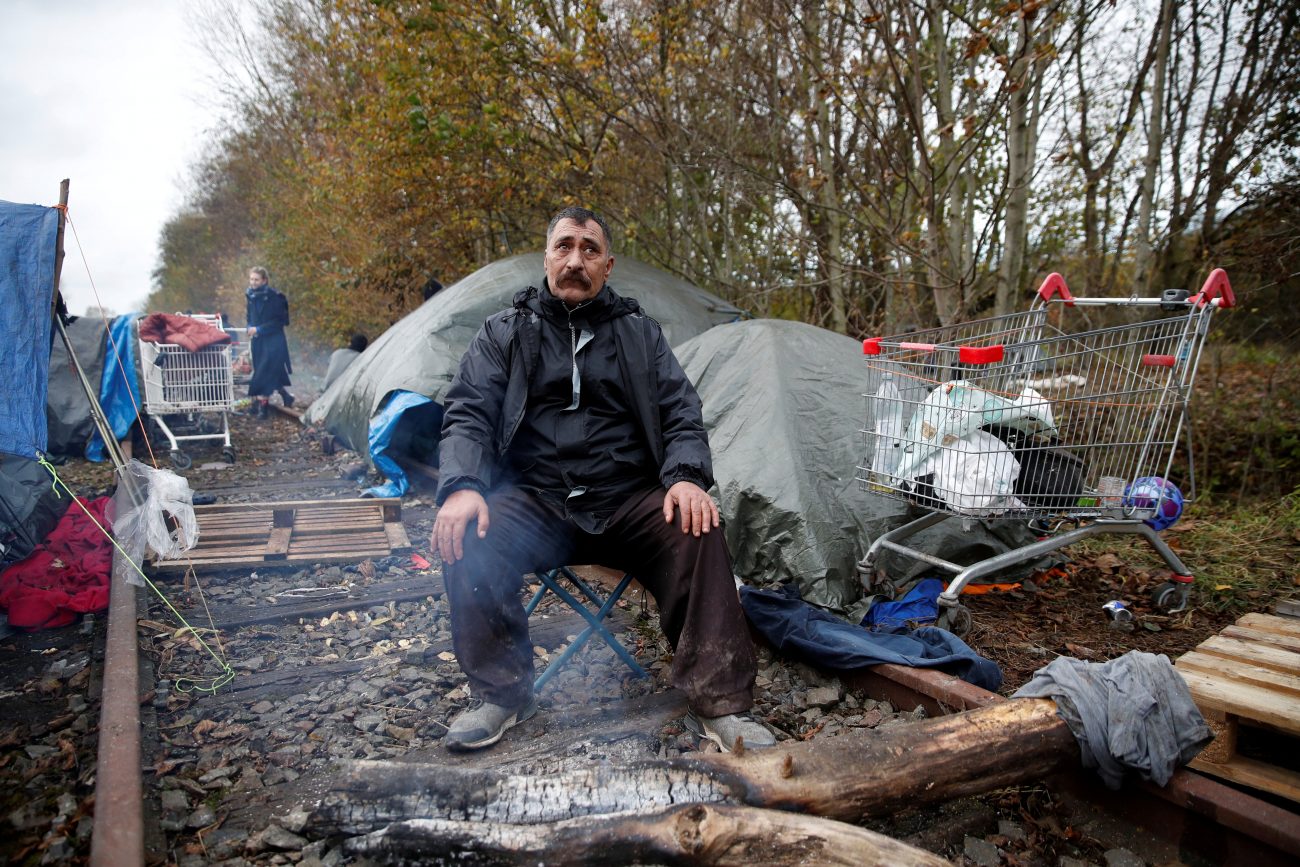 A migrant sits near wood fire at a makeshift migrant camp at Loon Beach in Dunkirk, France, Nov. 25, 2021, the day after 27 migrants died when their dinghy deflated as they attempted to cross the English Channel. Pope Francis asked visitors in St. Peter's Square to join him for a moment of silent prayer for migrants, especially those who recently drowned in the English Channel and in the Mediterranean and those who are freezing on the border of Belarus and Poland. (CNS photo/Johanna Geron, Reuters)

VATICAN CITY (CNS) — Pope Francis asked visitors in St. Peter’s Square to join him for a moment of silent prayer for migrants, especially those who recently drowned in the English Channel and in the Mediterranean and those who are freezing on the border of Belarus and Poland.

“How many migrants are exposed these days to serious dangers and how many lose their lives on our borders?” the pope asked Nov. 28 after reciting the midday Angelus prayer at the Vatican.

The pope’s appeal came the day after he called the Mediterranean Sea “a great cemetery” in a message to the people of Cyprus and Greece, which he will visit Dec. 2-6.

A spokesman for the Cypriot government said that after the pope’s visit, a group of asylum-seekers currently in Cyprus will move to Italy under Vatican sponsorship.

“This symbolic gesture demonstrates the solidarity of the primate of the Roman Catholic Church to our fellow human beings in need,” said Marios Pelekanos, the government spokesman. “It also confirms the support of the Vatican for the problem facing the Republic of Cyprus nowadays due to increased migration flows, as well as the need for a fair distribution” of migrants and refugees in the countries of the European Union “to alleviate the problem in the front-line countries.”

The Reuters news agency cited a Vatican source who said the pope offered to help resettle 50 migrants, although they are unlikely to arrive in Italy before Christmas because of the paperwork involved.

In his Angelus address, the pope said it was painful to think about the situation of many migrants and refugees today, including of those sent back to North Africa,  where they easily become the prey of traffickers, “who transform them into slaves, selling the women, torturing the men.”

Prayer and action must be the response, he said, thanking various Catholic charities and others dedicated to assisting migrants and refugees.

“I renew my heartfelt appeal to those who can contribute to a resolution of these problems, especially civil and military authorities, so that understanding and dialogue finally prevail over every kind of exploitation” and there is respect for the human dignity of each person, he said.

In the video message to the people of Cyprus and Greece Nov. 27, Pope Francis spoke of their lands as the “wellsprings” of early Christianity, of fraternity and of Europe with Cyprus as “the outpost of the Holy Land on the continent” and Greece as “the home of classical culture.”

“Even today, Europe cannot ignore the Mediterranean, the sea which has seen the spread of the Gospel and the development of great civilizations,” he said. “The sea, which embraces many peoples, with its open ports reminds us that the sources of living together lie in mutual acceptance.”

While looking forward to visiting the Orthodox and Catholic populations in the two countries, Pope Francis said he cannot forget “those who, in recent years and still today, have been fleeing from war and poverty, landing on the shores of the continent and elsewhere, and encountering not hospitality but hostility and even exploitation.”

“They are our brothers and sisters,” he said. “How many have lost their lives at sea! Today our sea, the Mediterranean, is a great cemetery.”

“As a pilgrim to the wellsprings of humanity,” Pope Francis said he would visit migrants on the Greek island of Lesbos as he did in 2016 to emphasize that peaceful coexistence is possible only with “fraternity and integration.”

Meeting Nov. 27 with the organizers of the Giàvera Festival — showcasing the music, food and cultures of migrants who have settled in the northern Italian Diocese of Treviso — Pope Francis praised them for ensuring “yours is a house with many windows open to the world.”

The program, he said, promotes “a culture of welcome rather than a throwaway culture.”

“The reality of migration in our time has taken on characteristics that can sometimes be frightening,” the pope told the group. “So, there is a greater need than ever for places where the faces, stories, songs, prayers and art of migrants are put at the center.”

Welcoming migrants and refugees, listening to them and learning from them is not “to hide or ignore the difficulties and problems” large movements of people can bring, Pope Francis said.

But the experience of individuals and communities that have been successful at integrating newcomers should be shared with government policymakers to ensure “a healthy realism is joined to respect for the dignity of persons.”

PREVIOUS: Pope: Discrimination against people with disabilities must end