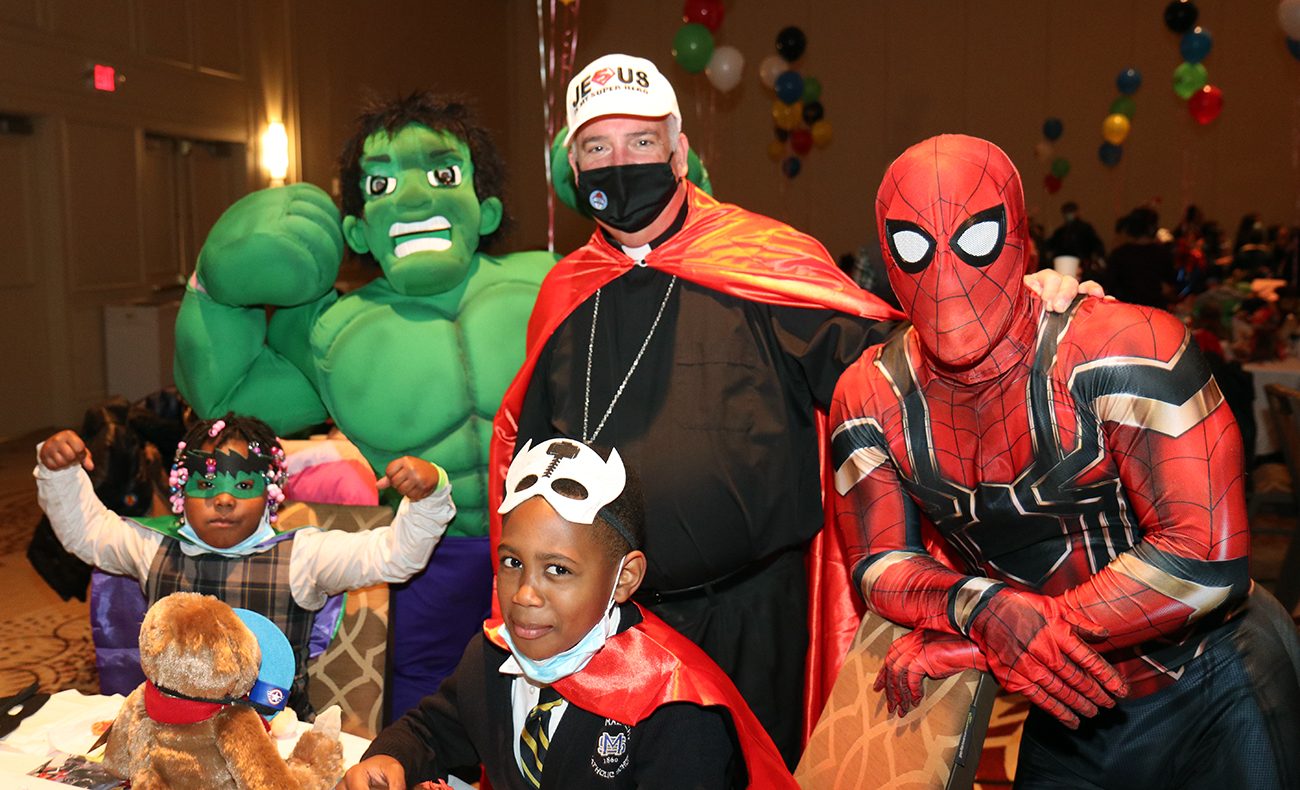 Archbishop Nelson Pérez donned a red Superman cape to join the Incredible Hulk and Spiderman at the 66th annual Archbishop's Benefit for Children Christmas party Dec. 20 at the Sheraton Downtown Hotel. Speaking to the 300 kids in attendance, the archbishop reminded them that Christmas shows Jesus is the real "superhero." (Sarah Webb)

Monday’s event, held at the Archdiocese of Philadelphia’s Pastoral Center and the nearby Sheraton Downtown Hotel, treated kids – who represented thousands served each year by CSS’s programs – to live Nativity scenes, musical performances, presents, balloon drops and plenty of holiday snacks, as well as a visit from Santa Claus.

Last year’s gathering had been scaled back due to COVID, but the long-anticipated return to in-person merriment was “a beautiful thing,” said lead organizer Amy Stoner, CSS’s director of community-based, housing and homelessness services.

“Just look at these kids,” she said. “They’re loving it.”

This year’s party theme, “Superheroes,” was brought to life by eighth-grade students from St. Raymond of Peñafort Independence Mission School in Philadelphia, who dressed as comic book characters and entertained guests with acrobatic dances. Kids on hand were provided with their own capes and masks, as they enjoyed clips from animated action films projected onto movie screens. 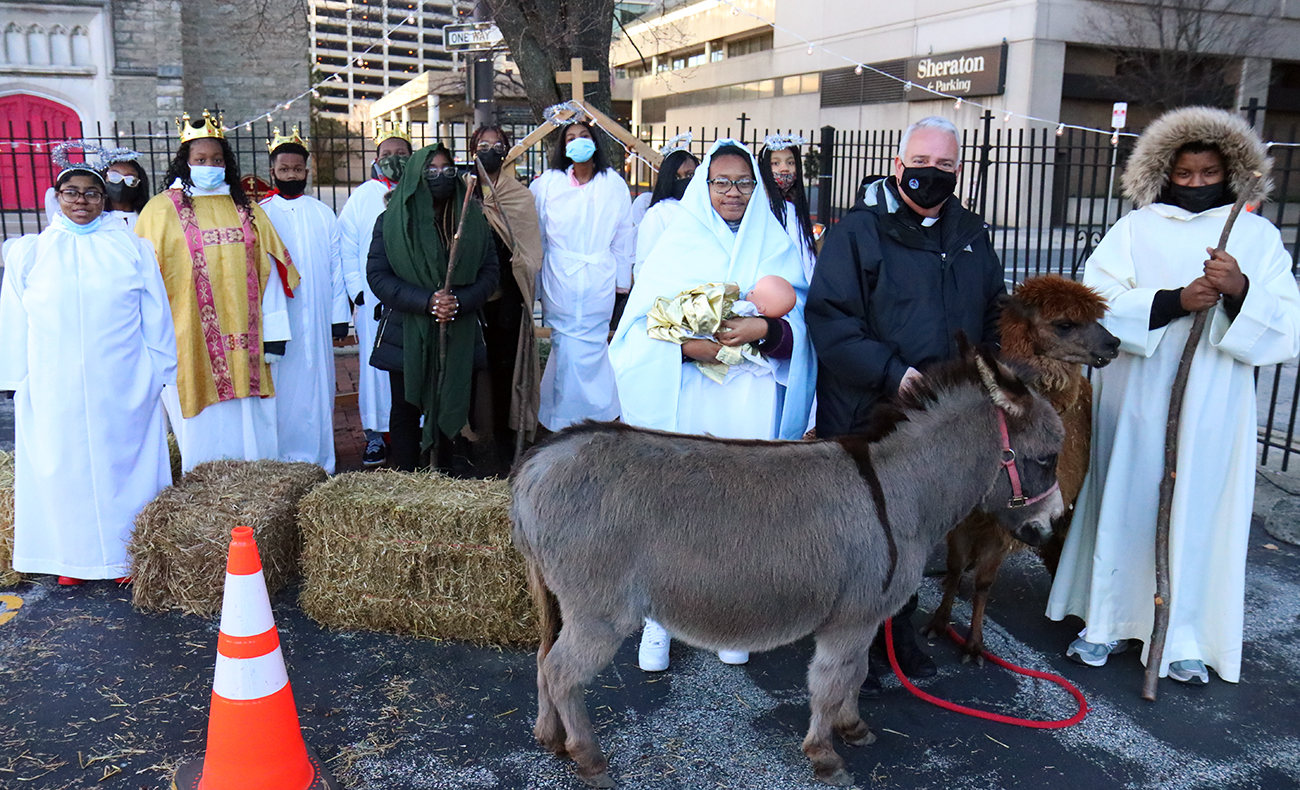 Prior to the Dec. 20 party, students from St. Raymond of Peñafort School staged a live outdoor Nativity, which Archbishop Pérez visited. (Sarah Webb)

The costumes and decorations all helped to reveal the true meaning of Christmas, said Archbishop Pérez – who demonstrated a few superpowers of his own by quickly calming the excited revelers for a short talk, followed by a prayer and blessing.

“You know, there are lots of superheroes … our firefighters and our police, your teachers and your parents,” said the archbishop. “But who is the ultimate, the best, the most awesome superhero of them all? Jesus.”

Christ appeared “as a little child, just like you,” said Archbishop Pérez, highlighting the Nativity reenactment provided by the St. Raymond students, during which Santa knelt before the infant Jesus while Spiderman, Captain Marvel and their colleagues sat quietly.

Christ, the “wonderful gift” of the Father’s love, “showed the world what it means to love,” said the archbishop.

“And so we celebrate … the coming of Christ in our world,” he said, and then asked those present to affirm: “Jesus is love, and I am love.”

That message resonated with all involved, said master of ceremonies Father Christopher Walsh, pastor of St. Raymond of Peñafort Parish.

Rehearsals for each year’s show become “a great teaching moment” for the St. Raymond students, he said, with the teens “going back and forth” over the script.

As they deepen their own understanding of Christmas, the eighth graders “(try) to sow seeds” of its significance in the minds and hearts of their younger peers, said Father Walsh.

The good news of Christmas has taken already root in Vanessa Valdes-Acosta and Jason Lam, both in third grade at St. Barnabas School in Philadelphia.

Describing the party as “amazing,” Valdes-Acosta and Lam agreed that Jesus more than qualified as a superhero.

“He had the power to heal people,” said Valdes-Acosta. “And he gave himself to die on the cross for our sins.” 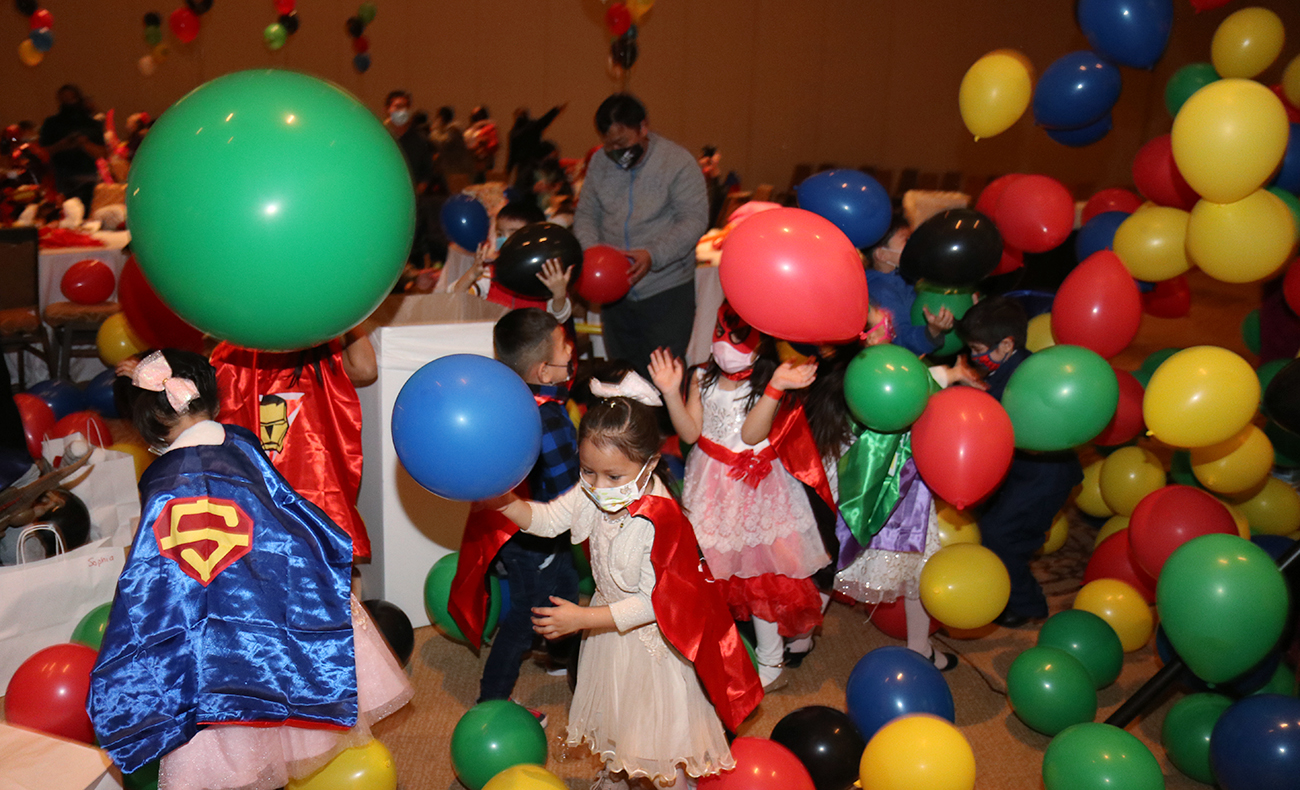