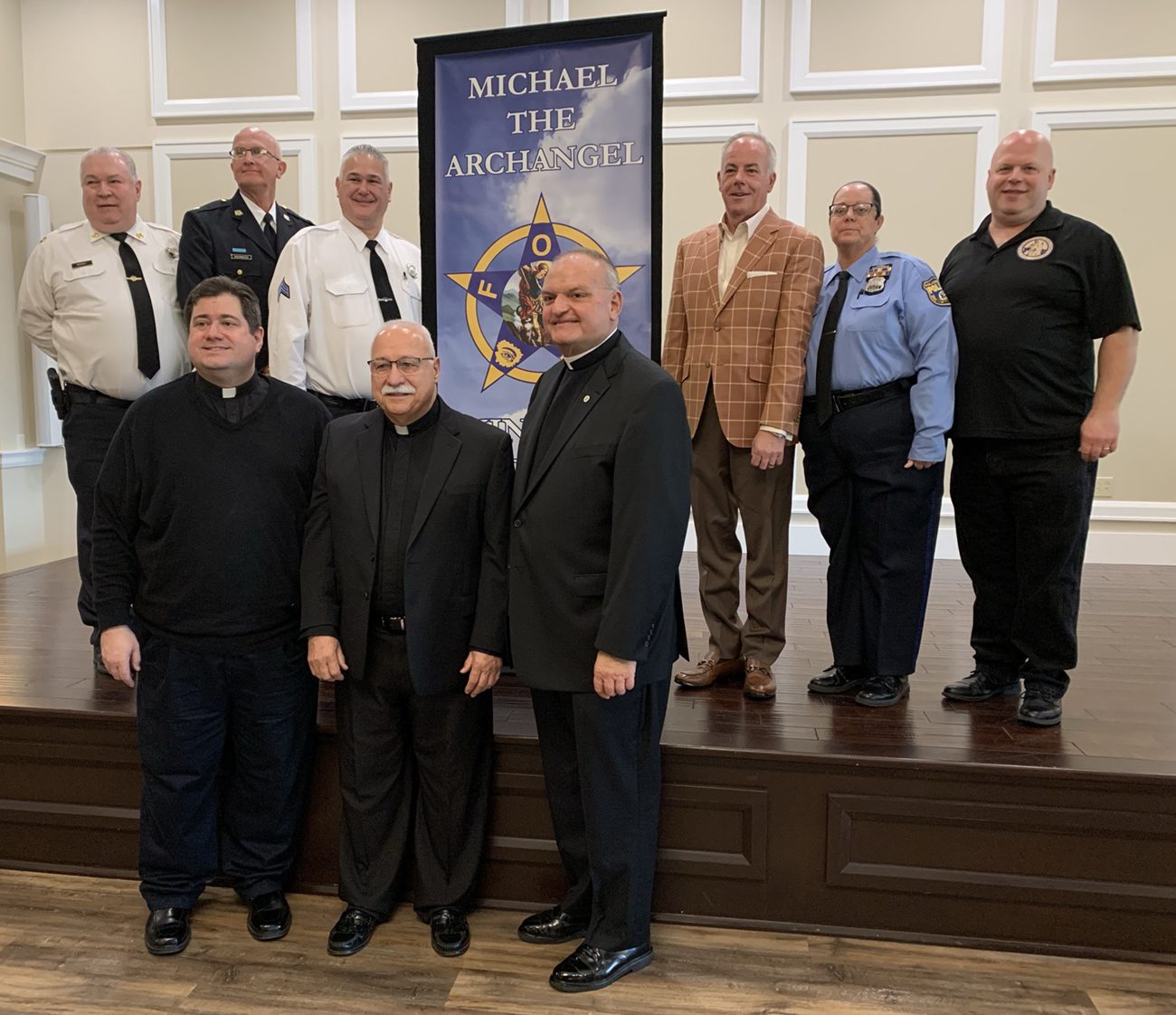 Oblate Fathers Jack Kolodziej, Lewis Fiorelli and Steven Wetzel (front, left to right) joined dozens of members of the Michael the Archangel Ministry for a Nov. 21 Mass at the Fraternal Order of Police Lodge #5 in Philadelphia. The ministry, co-founded and directed by Father Wetzel, draws on Salesian spirituality to provide pastoral care to local law enforcement along with extensive humanitarian outreach throughout Philadelphia. (Gina Christian)

A beloved 17th-century saint might be surprised (and delighted) to learn his legacy lives on in hundreds of local police — thanks to a religious order, several archdiocesan schools and a unique ministry to Philadelphia law enforcement.

That heritage was in evidence Nov. 21, when the Fraternal Order of Police (FOP) Lodge #5 hosted a Mass and breakfast honoring first responders at its Northeast Philadelphia location. Attended by some 175, the liturgy was organized by principal celebrant Father Steven Wetzel, an Oblate of St. Francis de Sales and founder of the FOP’s Michael the Archangel Ministry, which provides pastoral care, bereavement and crisis counseling, and spiritual enrichment to some 14,000 active and retired Philadelphia Police Department (PPD) officers and their families.

Concelebrating the Mass were Oblate Father Lewis Fiorelli, provincial of the order’s Wilmington-Philadelphia province, and Oblate Father John Kolodziej, the order’s director of development. Members of the Philadelphia Police & Fire Pipes and Drums provided solemn processional and post-Communion accompaniment at the liturgy.

Described by Father Wetzel as “multidenominational, rather than nondenominational,” the Michael the Archangel Ministry regularly supports a number of humanitarian initiatives, including St. Francis Inn, Shriners Hospital for Children and archdiocesan Catholic Social Services – and such practical dedication to God and others is exactly what St. Francis de Sales promoted, said Father Wetzel.

Born in France’s Savoy region in 1567, the “Gentleman Saint” is revered for his sound spiritual directives encouraging faithful to pursue true devotion to God according to their various states in life. De Sales’ numerous writings are marked by a joyful assurance that holiness, manifested through daily acts of kindness and charity, is possible for all.

Just as the Oblates embrace “servanthood” and “service to … the people of God,” said Father Wetzel, first responders “serve us in a very real way” by “placing (their) lives on the line” for their fellow citizens every day.

Like many members of Michael the Archangel Ministry, Father Wetzel said he was drawn to that spirit of “discipleship and grace” through his Oblate-led education at Father Judge High School in Northeast Philadelphia. 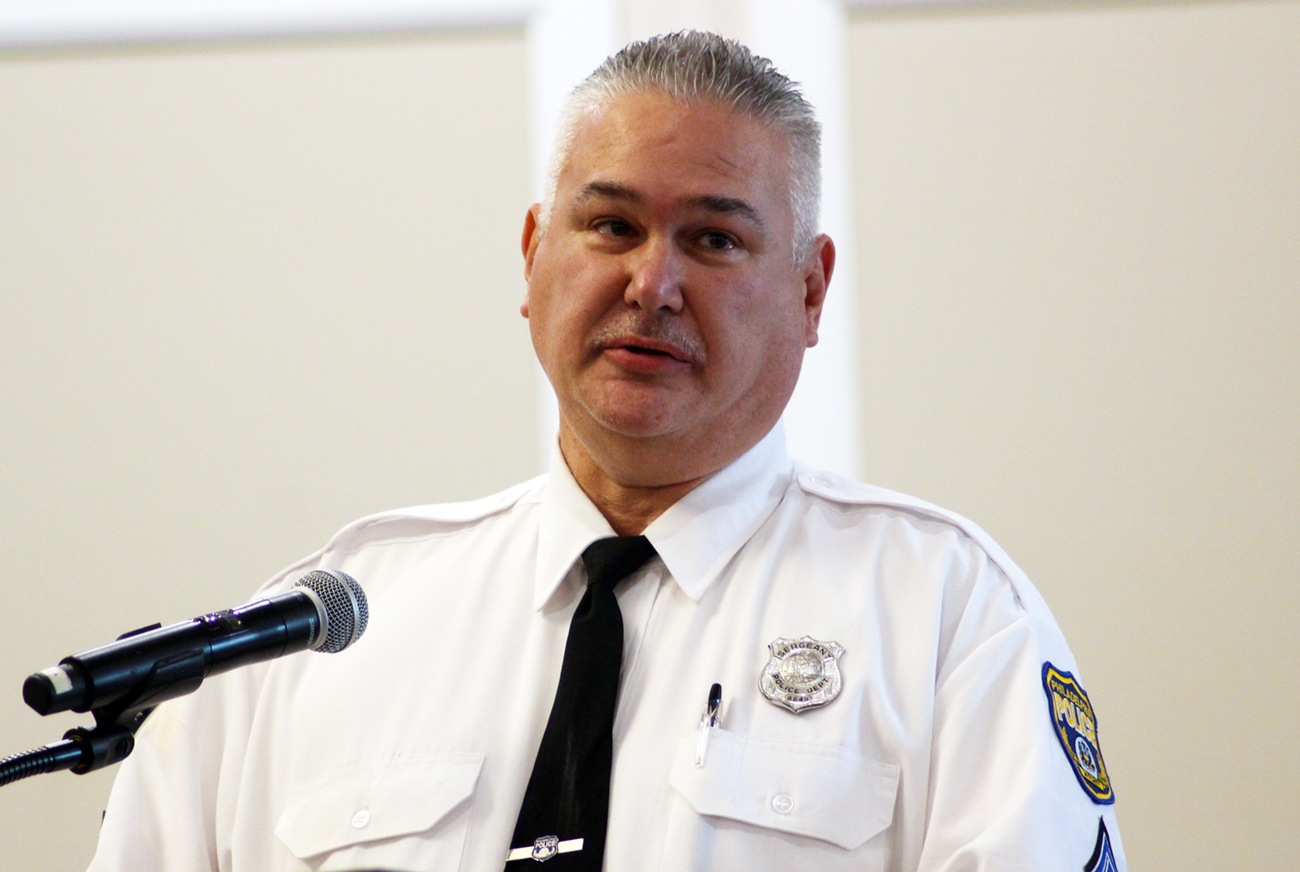 Philadelphia Police Sergeant Michael Cerruti, co-founder and board member of the Michael the Archangel Ministry, speaks at a Nov. 21 Mass sponsored by the ministry at the Fraternal Order of Police Lodge #5 in Philadelphia. (Gina Christian)

“The Oblates taught me to understand how I belong to God,” he said. “We (all) belong to God. And he has a mission for us.”

The Salesian charism, paired with Catholic education, has led many to enter into law enforcement, said Sgt. Michael Cerruti, chairman of the Michael the Archangel Ministry.

“A lot of officers won’t openly admit to it, but they take this job to serve people, and I believe it’s based on their faith and the education they received,” he said.

During his 32-year tenure with the PPD, Cerruti has seen a “progression” of Catholic school graduates, particularly those instructed by Oblates, among the ranks.

Philadelphia Detective John Halligan agreed, saying the priests who taught him at the former Northeast (North) Catholic High School –“the only real Oblate school in the area,” he joked – helped him and other youth “become men rooted in the Catholic faith.”

(Watch a video of the 2021 Michael the Archangel Ministry “Good Night Lights” gathering at Shriners Hospital for Children.)

“They showed us how to be who you are, and be that well,” said Halligan, quoting a maxim of St. Francis de Sales. “It is not a coincidence that North Catholic and Father Judge have the largest number of grads that have chosen service to others as their calling in life. Whether it is police, fire or military, we have the Oblates of St. Francis de Sales to thank for their guidance.”

In fact, he added, “many of our Salesian brothers have made the ultimate sacrifice in their service to others,” including fallen PPD officers Leo VanWinkle, Daniel Gleason, Joseph Friel, Gary Skerski and Jimmy O’Connor.

Such “dedication to something in life greater than yourself … has echoed throughout the Philadelphia Fire Department and every branch of the military time and time again,” said Halligan.

Faith is essential to the work of PPD Officer Cornell Rochester, who proclaimed the first reading at the Nov. 21 Mass.

“Without faith, there’s nothing, and faith is what’s lacking now in the world,” he said, adding he strives to “go out on the streets … (and) treat people with love and respect,” so as to “be a servant to others.”

Having Father Wetzel as a shepherd on those streets is a great comfort, said Halligan.

“Father Steve is on the front lines with all of us,” he said. “He has been with us throughout two years of civil unrest and a pandemic. He wasn’t in an office or a rectory, he was on the street. … He wanted to be a shepherd, who must tend to his flock and at times fight off the wolves.”

Whether riding along on “last out,” as the overnight PPD shift is known, or collecting donations for those in need, Father Wetzel is “a symbol of Christ and service to others,” said Dan Solecki, a Michael the Archangel Ministry board member.

For his part, Father Wetzel continues to challenge ministry members to “live Jesus,” as St. Francis de Sales would say.