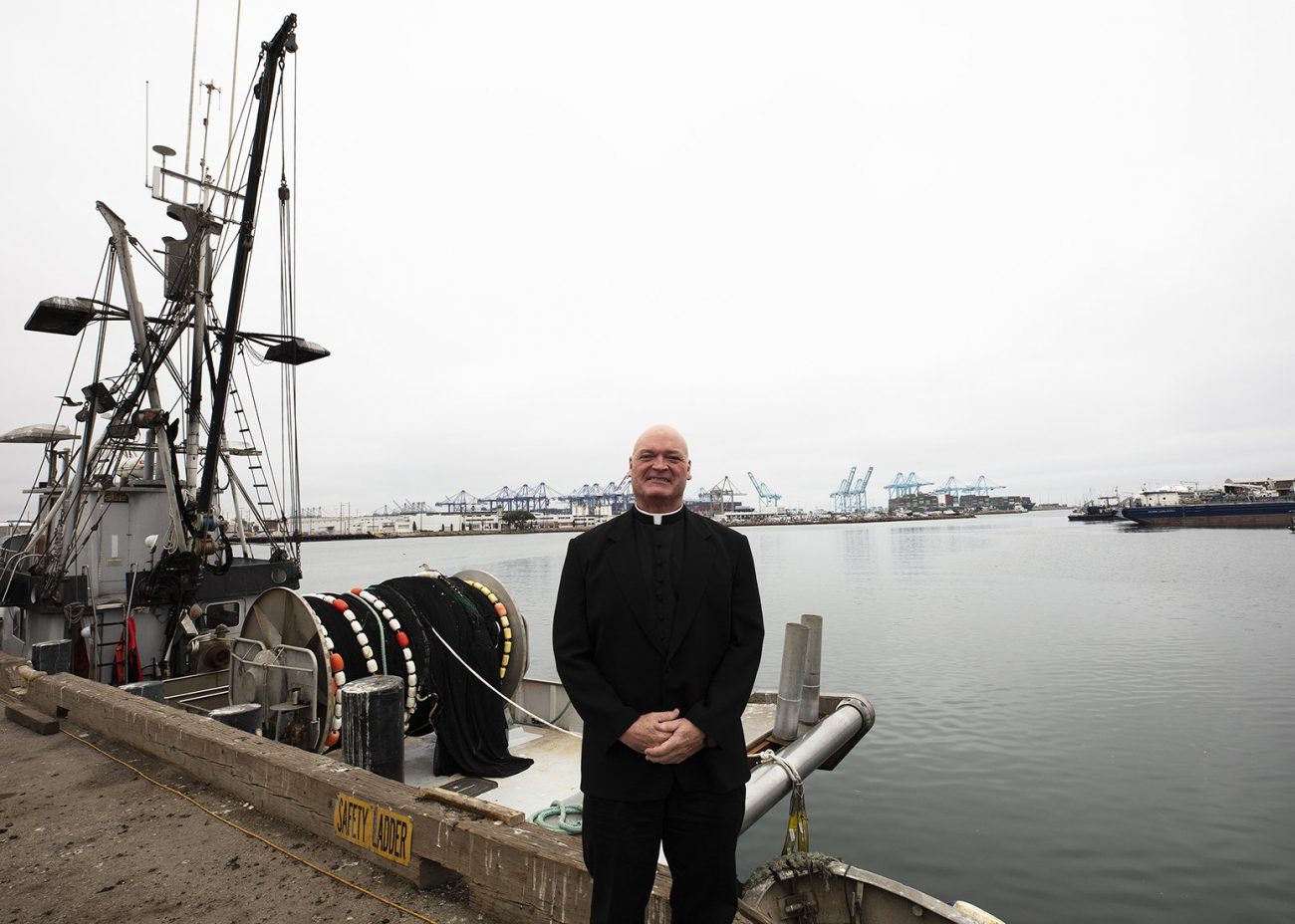 Father Maurice Harrigan poses for a photo Oct. 30, 2021. He is the pastor of Mary Star of the Sea Church in San Pedro, Calif., and chaplain at the Stella Maris Crew Center and Chapel at the Port of Los Angeles. (CNS photo/Victor Aleman, Angelus News)

Now the sign beckoning a safe harbor for thousands of global sailors and hospitality workers sits behind locked doors at the Port of Los Angeles World Cruise Center in San Pedro.

Its overstuffed couches sit empty. Its care packages of shipboard necessities, from warm socks to shampoo to rosary beads, sit untended. Its coffee machine, cold, despite two Holland America and Princess ships tethered recently to a dock outside its capacious windows.

And its Stella Maris Chapel — a sanctuary for global seafarers who once eagerly received the holy Eucharist after days, weeks, or months at sea — sits empty.

“Normally, we’d have 40 to 50 people in our chapel from both these cruise ships,” said Father Maurice Harrigan, pastor of the nearby Mary Star of the Sea Church and its maritime offshoot at Berth 93.

“And now — zero. They’re not allowed off their ships. That’s a huge problem, for them and for us. They want to be served; we want to serve them. But we can’t do anything,” he told the Angelus, the online news outlet of the Archdiocese of Los Angeles.

The doldrums of the San Pedro chapel occur as cruise lines, stalled during the COVID-19 contagion, restarted their engines this fall for world tours.

It also coincides with a worldwide supply-chain backup that has clogged the nation’s busiest container port, with up to 100 merchant ships idling offshore waiting to unload their cargoes.

With so many ships swirling around the Los Angeles and Long Beach ports, it’s not entirely clear why thousands of their Catholic seafarers haven’t been able to access the Stella Maris Crew Center and Chapel. 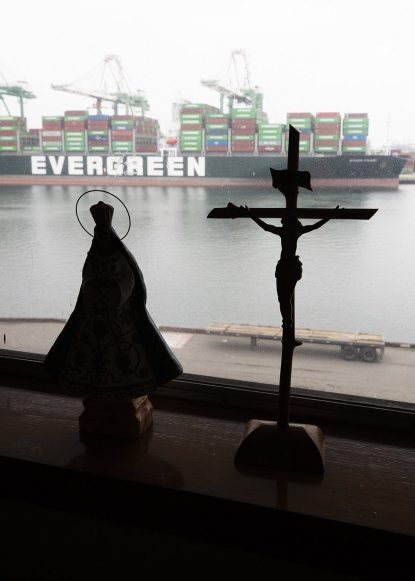 A cargo ship is seen from the Stella Maris Chapel at the Port of Los Angeles Oct. 30, 2021. (CNS photo/Victor Aleman, Angelus News)

Since ancient times, Stella Maris — the Latin title for Our Lady, Star of the Sea — has been their guiding star, and the beacon for the historic Mary Star of the Sea parish, its 80-year-old maritime ministry and for its parish priest.

The Mary Star of the Sea Church, founded in 1889 on a hill overlooking the Port of Los Angeles, has been dubbed the “Fisherman’s Parish” for its links to the once-thriving fishing and canning industries.

A shining Mother Mary has stood for decades atop its lofty bell tower, thanks largely to Croatian and Italian fishermen who devoted a portion of their daily catch to pay for the 10-foot bronze statue.

Her open-armed welcome has extended to thousands of sailors and ship crews streaming through the Los Angeles harbor past Angel’s Gate.

The Stella Maris Chapel is an outgrowth of the parish that is linked to the Apostleship of the Sea, a Catholic organization that supports needy seafarers around the world.

For decades, a Mary Star of the Sea priest conducted daily Mass at the chapel and offered pastoral guidance, including Communion. The mostly foreign ship crews on shore leave also were helped to get to doctor appointments and to visits with their respective consulates.

When not attending church in a small alcove toward the back, dozens of men and women hung out in the lounge, logged on to its computers, thumbed through its library, picked up Amazon deliveries, or received care packages of hygiene kits, prayer books and more, assembled by local volunteers from the Catholic Daughters of the Americas.

Up until the COVID-19 contagion, the Stella Maris Crew Center and Chapel saw as many as 4,000 mariners a year, a majority from visiting cruise ships, many of whom were natives of the Philippines, Southeast Asia and Southern India, Father Harrigan said.

The chapel was closed in March 2020 during a public health order barring indoor worship during the pandemic. Its former chaplain, Father Freddie Chua, is now pastor of Annunciation Church in Arcadia, California.

“It’s been in limbo,” said Nicholas Vilicich, sacristan for Mary Star of the Sea, who once helped shuttle crews in a designated church van for Stella Maris. “Crews can’t get off the ship — at all. We can’t get on the ships. It’s a great loss to crew members who need our help.”

For decades, foreign-born crews on ships docking at U.S. harbors could simply request a shore-leave visa, and go. Then came the pandemic, when safety protocols stranded more than 200,000 seafarers at sea for months. Now some crews are being granted shore leaves at various ports, including Los Angeles.

But Father Harrigan, who replaced Father Chua as chaplain of the Stella Maris Chapel, was mystified as to why cruise ship crews weren’t showing up at Stella Maris. The chapel is being opened once a week till they return.

He said a Princess Cruises purser told him federal customs officials were barring shore leaves because of concerns that crews from certain nations could jump ship. U.S. customs officials said that’s not the case.

“We haven’t made any port-wide changes regarding shore passes,” said Jaime Ruiz, branch chief for strategic media engagement for the U.S. Customs and Border Protection in an email to the Angelus. “Last time I checked, there were over 600 shore passes. I assume the volume will increase as the port congestion eases up and cruise lines resume full operations.”

He said CBP officers conduct interviews and a risk-assessment of crew members with a valid visa and passport to determine if a shore pass should be granted. The agency also grants leave in special circumstances for crew members who are not eligible for a shore pass, such as a need for medical care.

He said he suspects the decrease in Stella Maris attendees may be largely attributable to the pause in cruise ship operations over the last year, given that a cruise ship can have upward of 1,600 crew versus a container ship that typically has about 20 crew members.

“Cruise ship arrivals have resumed over the last couple of months,” Ruiz said, “but we’re still not at pre-COVID volume.”

“We have received requests from carriers, cruise ships and vessel captains to deny shore passes,” he said. “However, we still issue the shore pass based on the aforementioned risk assessment and not based on a request from the industry.”

Holland America, a branch of Carnival Corporation & plc, based in Seattle, did not return calls. A spokeswoman for Princess Cruises, also a branch of Carnival, said from time to time due to operations, compliance or safety considerations, shore leave may not be available.

A spokesman for Carnival Corporation said in an email he did some preliminary checking, and “it appears that our crew members are taking shore leave” in Los Angeles.

But according to the Sea Me Crew Foundation, a nonprofit advocate and support group for global crew members based in Vancouver, British Columbia, it’s been very erratic on who gets to leave a ship and who doesn’t, depending on the ship and port-of-call, as well as number of COVID-19 cases on board.

“To my knowledge, (Princess is) not letting crews off in LA,” said Krista Thomas, founding president of the foundation, which has 60,000 Facebook crew members. “I haven’t heard of anyone getting off in LA lately.”

Meanwhile, Father Harrigan said he’s working with Princess Cruises officials so that he can conduct services for seafarers on deck with their ships in port.

“These people have a very difficult life, being seafarers,” said Father Harrigan, 58, a native of Glendale who left the business world after discerning the call to the priesthood. “And it’s been especially difficult for us to serve them. Aboard ship, they don’t have Wi-Fi, comfortable couches, wide-screen TVs, stuff we all take for granted.

“I’m very sad, distressed. I wish we could serve our people,” he said. “Those we serve can’t come in to worship — receive Mass, any of the sacraments. … They are spiritually starving to death.”

Bartholomew writes for Angelus, the online news outlet of the Archdiocese of Los Angeles.