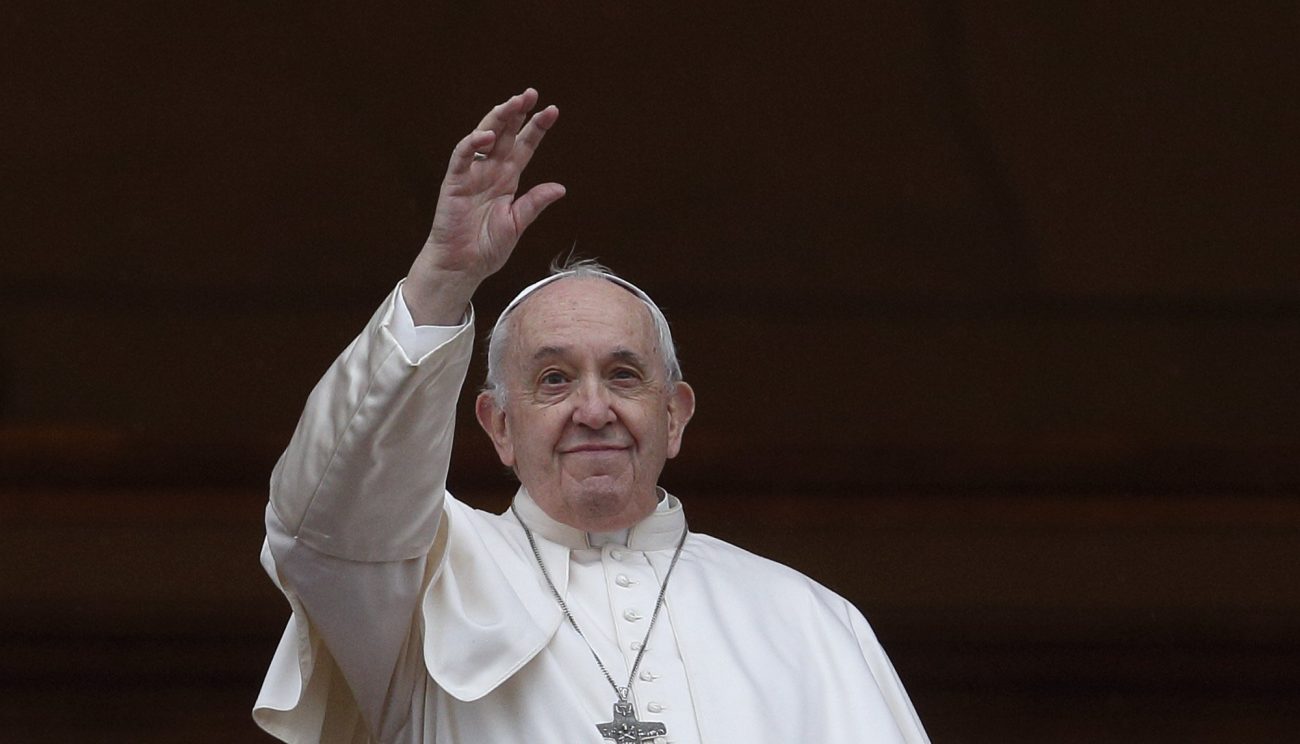 Pope Francis greets the crowd after delivering his Christmas message and blessing "urbi et orbi" (to the city and the world) from the central balcony of St. Peter's Basilica at the Vatican Dec. 25, 2021. (CNS photo/Paul Haring)

VATICAN CITY (CNS) — Before giving his Christmas blessing to the city of Rome and to the world, Pope Francis drew attention to the many places around the globe and within human hearts in need of Jesus, the prince of peace.

“In the cold of the night, he stretches out his tiny arms toward us: He is in need of everything, yet he comes to give us everything,” the pope told people gathered in a rain-washed St. Peter’s Square.

“On this festive day, let us implore him to stir up in the hearts of everyone a yearning for reconciliation and fraternity,” Pope Francis said Dec. 25 before giving his blessing “urbi et orbi” (to the city and the world).

Cardinal Renato Martino, 89, the protodeacon of the College of Cardinals, announced that the solemn blessing included a plenary indulgence for the people in the square, everyone watching on television, listening by radio or following on their computers.

Jesus came into the world “like a whisper, like the murmur of a gentle breeze, to fill with wonder the heart of every man and woman who is open to this mystery,” the pope said in his Christmas message.

“The Word became flesh in order to dialogue with us,” he insisted. “God does not desire to carry on a monologue, but a dialogue. For God himself — Father, Son and Holy Spirit — is dialogue, an eternal and infinite communion of love and life.”

But all too often in too many places, dialogue is precisely what is missing, he said, as he offered specific prayers for people struggling to survive amid war or the threat of war, violence, oppression or crushing poverty in Syria, the Holy Land, Yemen, South Sudan, Ukraine, Myanmar and Ethiopia.

The impact of the ongoing COVID-19 pandemic on health care and the economy, but also on the way individuals live and interact was part of the pope’s prayer as well.

With the pandemic, the pope said, “our capacity for social relationships is sorely tried; there is a growing tendency to withdraw, to do it all by ourselves, to stop making an effort to encounter others and do things together.”

“On the international level too, there is the risk of avoiding dialogue, the risk that this complex crisis will lead to taking shortcuts rather than setting out on the longer paths of dialogue,” he said. “Yet only those paths can lead to the resolution of conflicts and to lasting benefits for all.”

Pope Francis said he knows people get weary watching or reading the news, but attention is needed or “we risk not hearing the cry of pain and distress of so many of our brothers and sisters.”

In addition to “the continuing tensions between Israelis and Palestinians that drag on without a resolution, with ever more serious social and political consequences,” he said, people should not forget Bethlehem, “the place of Jesus’ birth, which is experiencing hardship also from the economic repercussions of the pandemic, preventing pilgrims from visiting the Holy Land and adversely affecting the life of the people.”

And, the pope said, “let us listen to the cry of children arising from Yemen, where an enormous tragedy, overlooked by everyone, has silently gone on for years, causing deaths every day.”

In a troubled world, he said, Christmas celebrates hope. “Today, ‘the love that moves the sun and the other stars,’ as Dante says, became flesh. He came in human form, he shared in our plight, and he broke down the wall of our indifference.”

In the form of a prayer to the newborn Lord, Pope Francis pleaded not only for peace between nations at war, but for all the suffering people in the city and the world and for the suffering Earth itself.

“Eternal Word become flesh,” he prayed, “make us attentive to our common home, which is suffering from the carelessness with which we so often treat it. Inspire political leaders to reach effective agreements, so that future generations can live in an environment respectful of life.”

He prayed for women who have been victims of domestic violence, “which has increased in this time of pandemic,” for the consolation of elderly people who are alone and for the serenity and unity of families.

He prayed for the sick, those who care for them and for a greater effort to make COVID-19 vaccines available to all.

He prayed for prisoners of war and political prisoners, and for migrants, refugees and displaced people.

“O Christ, born for our sake,” Pope Francis prayed, “teach us to walk beside you on the paths of peace.”