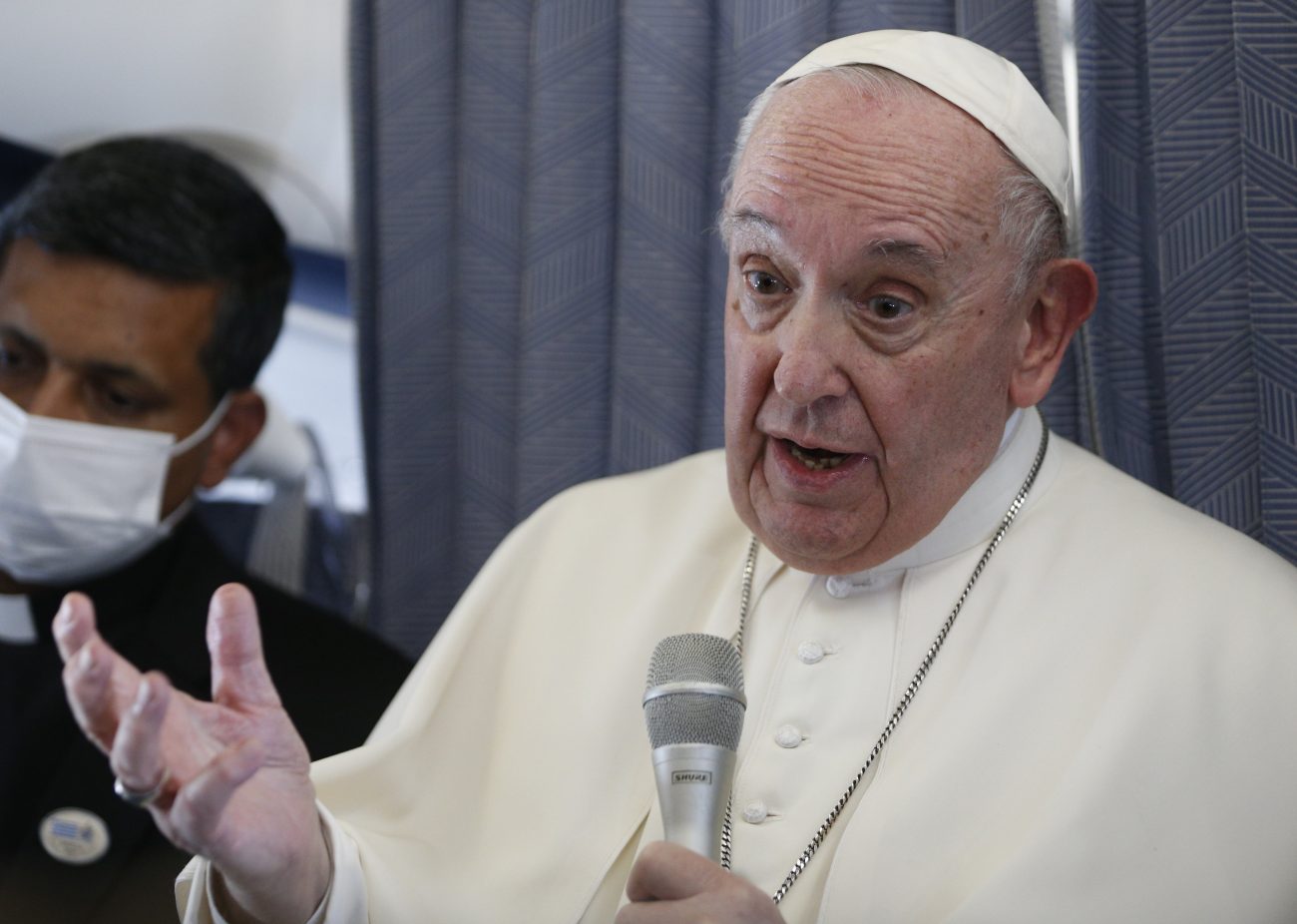 Pope Francis answers questions from journalists aboard his flight from Athens, Greece, to Rome Dec. 6, 2021. The pope was concluding a five-day visit to Cyprus and Greece. (CNS photo/Paul Haring)

ABOARD THE PAPAL FLIGHT TO ROME (CNS) — Pope Francis told reporters he accepted the resignation of Archbishop Michel Aupetit of Paris because the archbishop’s reputation had been destroyed, making it impossible for him to continue leading the French archdiocese.

“There was a failure on his part, a violation of the Sixth Commandment, but not a complete violation, because it involved little caresses and massages that he gave his secretary. That’s the accusation,” the pope responded Dec. 6 when asked by a French reporter.

The archbishop had said he offered to step down to avoid “becoming a source of divisions,” and the pope accepted his resignation Dec. 2.

The French archbishop’s actions were “sinful,” the pope said, “but it’s not among the most serious sins. The most serious sins are not sins of the flesh,” but sins like pride and hatred, especially when committed by those who pretend to be “angelic.”

Too many people today pretend that they are sinless and almost demand that their bishops are, too, when “we are all sinners,” the pope said.

“But when the gossip increases and increases to the point that it takes away a person’s reputation, he can no longer govern,” the pope said. “He lost his reputation not because of his sin, which was a sin — like that of (St.) Peter, mine, yours, sins — but because of the gossiping.”

“A man whose reputation has been destroyed so publicly cannot govern,” the pope repeated.

Pope Francis spent just over 30 minutes responding to questions from reporters on his flight to Rome from Athens at the end of a five-day trip that took him to Cyprus and Greece.

Most of the questions involved migration and relations with the Orthodox churches, two of the major themes of the pope’s visit.

“God never tires of forgiving us,” the pope said. “It is we who tire of asking forgiveness.”

It is much easier to ask God’s forgiveness than to humble oneself and ask another person for pardon, he said, but that is what brothers and sisters do to preserve peace in the family.

Pope Francis also told the reporters he had a meeting planned later in December with Metropolitan Hilarion of Volokolamsk, head of external relations for the Russian Orthodox Church. The pope said he hoped that meeting would lead to an encounter soon between him and Patriarch Kirill of Moscow.

Arriving in Athens Dec. 4, Pope Francis paid tribute to Greece as the cradle of Western civilization and warned, “we are witnessing a retreat from democracy.”

A reporter on the flight back to Rome asked him to be more explicit.

He responded that he sees two main threats to democracy in the modern world: populist politicians who foster an excessively narrow notion of “the people” and “the homeland” — leaving too many citizens out of the democratic process — and a push for a global “empire” where national values, cultures and traditions would be sacrificed or “watered down” in a search for unity that could easily become uniformity.

On the question of immigration, Pope Francis told reporters, “today it is the fashion to put up walls and barbed wire and concertina wire to impede migration.”

Asked particularly about the anti-migration policies of several East European countries, the pope said, “The first thing I’d say if I had one of these government leaders in front of me is, ‘But think about how it was when you were migrants and no one would let you in. You wanted to flee from your country and now you’re building walls?'”

“This is painful, because those who build walls lose a sense of their own history,” because many of them “were enslaved by another country.”

However, he said, managing migration flows is part of a government’s responsibility, and it must be realistic about the resources it has to welcome, protect, promote and integrate newcomers.

While some European countries truly are hard pressed, he said, the other nations of the European Union must come to their aid, not only sending money, but welcoming their fair share of the people in search of safety and a better life.

And, he said, when it is impossible to accept someone in Europe who has paid traffickers everything he or she has for a place in a boat, they must be “accompanied” back to their nation of origin, not simply pushed back to where they boarded boats.

“I can’t just leave him or her on the beach of Libya; that is cruelty,” the pope said, referring to widespread reports of the maltreatment of returnees.

With the growing hostility to migrants in Europe and elsewhere, he said, “civilization is at risk.”