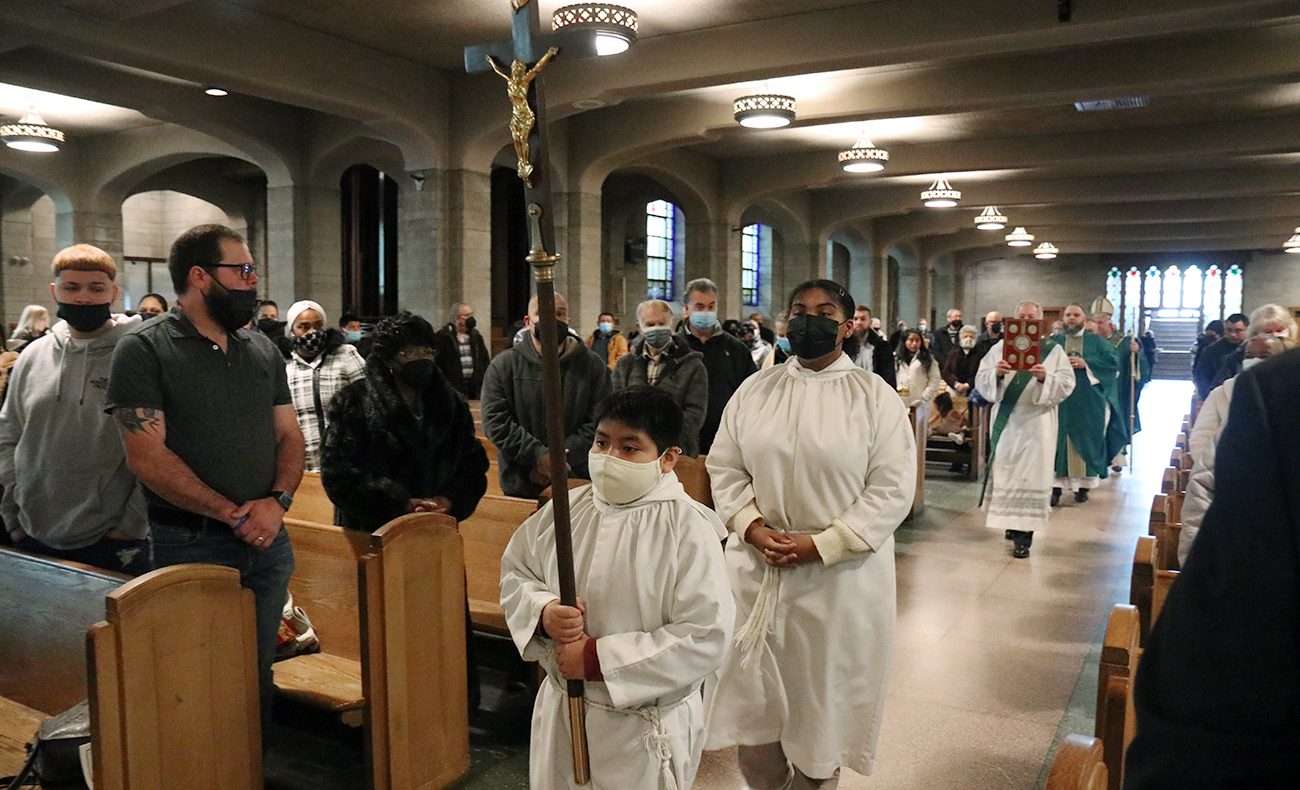 St. Ambrose Parish opened its centennial year with a Jan. 16 Mass celebrated by Archbishop Nelson Pérez, who served as parochial vicar there during his first four years of priesthood.

An archdiocesan parish that was launched in a movie theater has just kicked off its centennial year celebration – and the journey to that milestone reads like the plot of a feel-good film.

Archbishop Nelson Pérez presided at a Jan. 16 Mass that opened a series of events honoring the 100th anniversary of St. Ambrose Parish in Northeast Philadelphia. The liturgy, attended by some 225 current and former parishioners, was a homecoming for the archbishop, who served as parochial vicar at St. Ambrose during his first four years of priesthood.

In his homily, Archbishop Pérez said “home” is exactly what a parish should be.

In fact, St. Ambrose has always been a parish at home in its surroundings – literally, according to a history compiled by current pastor Father Charles Ravert, who spoke with CatholicPhilly.com by telephone ahead of the Mass.

Founded in 1923 by Father John Hughes, the parish first had to “build community before it could build a church,” said Father Ravert.

Back then, the densely populated Feltonville section in which St. Ambrose is located was “deserted” and dotted by temporary “hovels,” he said.

Lacking funds for a church, parishioners began assembling for Mass at a movie theater on Rising Sun Avenue. 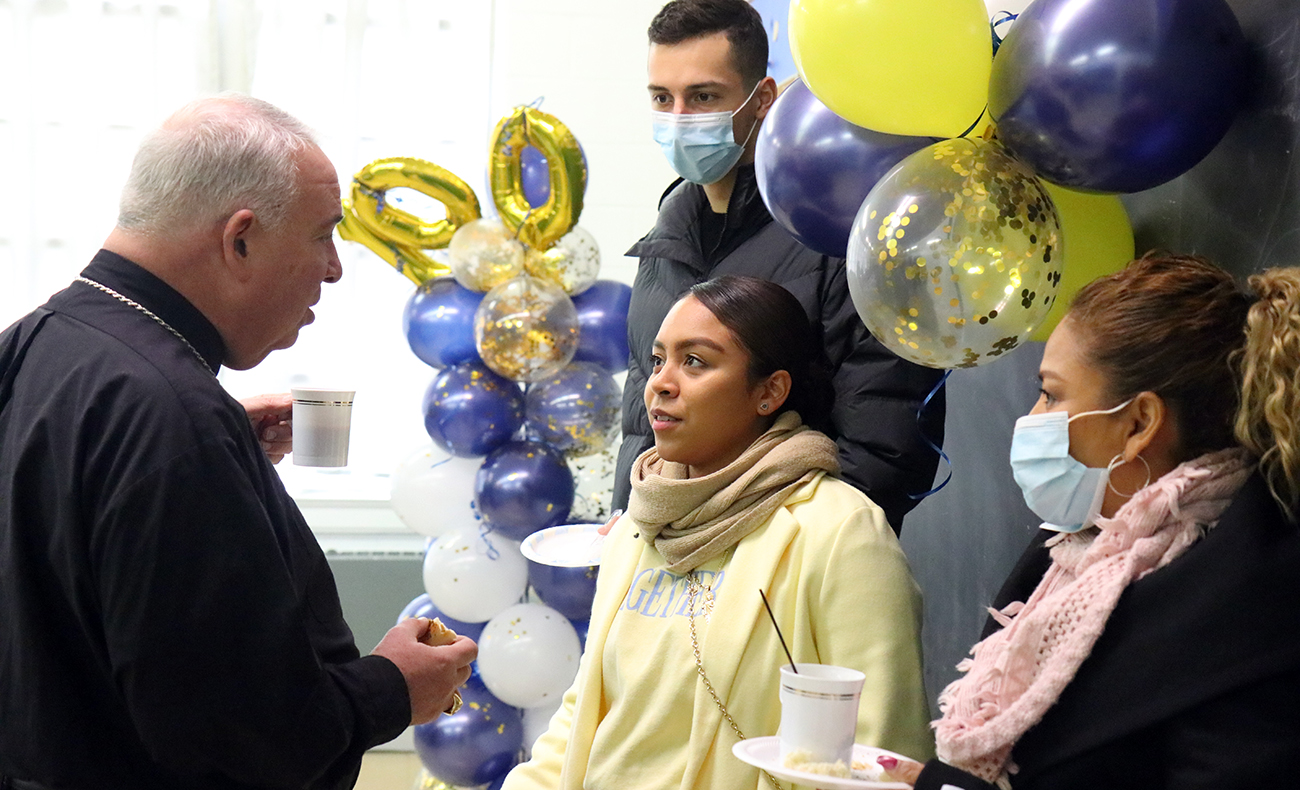 “A young Catholic boy who was a weekend manager heard from Father Hughes they needed a place to worship,” said Father Ravert. “He said Father could have Mass early in the morning, before the afternoon matinee.”

However, the manager kept the arrangement secret from the theater’s owner, who eventually put the worshippers out.

A parishioner named Francis Lynch then opened his Wyoming Avenue home for Sunday Masses. The liturgies continued there for several years, until they were moved to the chapel of the newly built St. Ambrose School.

In 1952, construction began on the church itself, which was completed in 1956 – and, in a real sense, left unfinished.

“This church was supposed to be the lower church of a bigger structure,” said Archbishop Pérez, noting a lack of resources had halted the project, but not the parish’s mission.

“God gave St. Ambrose … what the community and the people needed at the time,” he said.

The basement design of the church actually enhances “a sense of humility and quiet prayerfulness,” said Edward Stafford, a retired U.S. diplomat who grew up in St. Ambrose Parish and returned from his current home in New Jersey for the Jan. 16 liturgy.

As the parish became more ethnically diverse, then-Father Pérez worked to establish a Spanish language Mass at St. Ambrose – and once again, members opened their homes for the liturgies, until a regular celebration could be scheduled at the church on Sundays.

Under longtime pastor Father James Catagnus, who led the parish for some 27 years, St. Ambrose continued to navigate a rapidly changing world, one that required “courageous” and “difficult decisions” — such as the closure of the school and the sale of several properties — that enabled the parish to remain viable, said Father Ravert.

But with Father Catagnus’ retirement in 2020, word had spread that the parish’s days were numbered, and news of Father Ravert’s appointment as pastor did little to counter that fear.

“People were like, ‘He’s just coming to shut the place down,’” said Father Ravert, adding he feels his task has been to “help the parish come out of depression.”

The centennial provided a way of doing just that, he said, since it offered a target date for “some realistic goals” the parish could reach.

From his first vigil Mass, which drew just four parishioners, Father Ravert has seen attendance steadily grow, with more members taking part in the planning of centennial, the theme of which is “remember, renew, rejoice.”

“We want to let God, Philadelphia and everybody in the neighborhood know St. Ambrose is still here,” said Father Ravert.

“Ever since the school closed, a lot of kids stopped going to the church, and the parish became very adultish,” she said. “But Father Ravert has opened his arms to (embrace) different youth activities.”

St. Ambrose strives to be “a force for good in the neighborhood,” hosting cleanups and prayer processions for peace on the streets, said Father Ravert.

“Let’s start here at home, with renovations through the renewal of Spirit,” he said, stressing that collaboration is essential.

“The people are the ones who saved their parish; it wasn’t me,” he said. “It’s the parishioners saying, ‘Yes, we’re going to live out the Catholic faith, and live it proudly at St. Ambrose Parish.’”

Archbishop Pérez said the members of St. Ambrose “have a responsibility to dream and to do what (is needed) to make that dream happen, knowing God blesses the dream and the effort.”

Parishioners are up for the task of keeping the home fires burning, said Tejada.

“This is definitely a family,” she said. “And I think from here we’re just going up.” 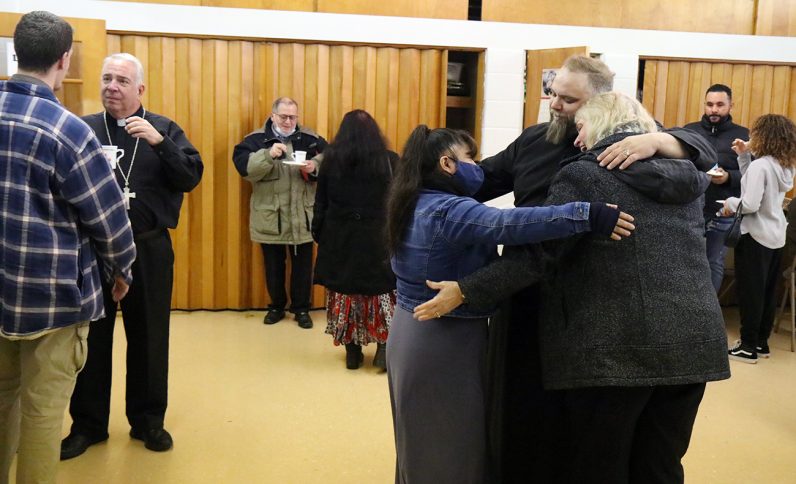