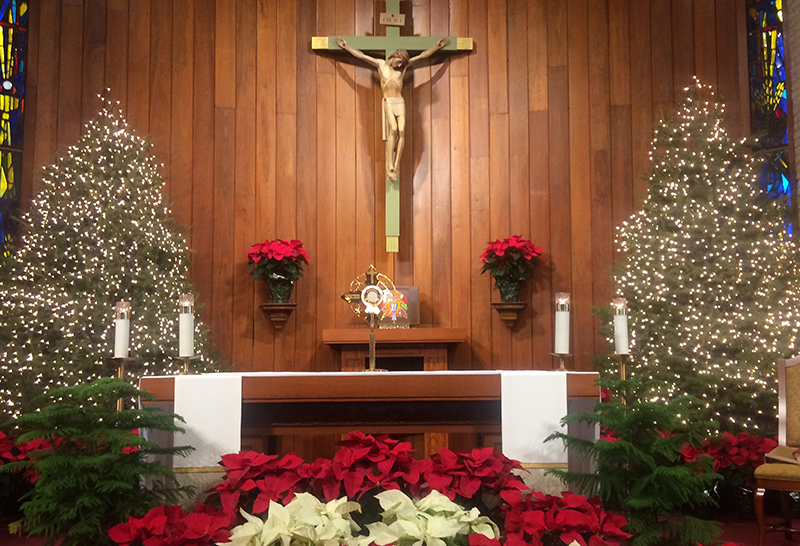 A monstrance exposing the Blessed Sacrament sits on the altar decorated for the Christmas season, including on Jan. 5, patronal feast day of St. John Neumann Church in Bryn Mawr. (Photos by Dan McCarty)

The feast of St. John Neumann, fourth Bishop of Philadelphia, was observed throughout the Catholic Church on Jan. 5. To remember its patron, St. John Neumann Parish in Bryn Mawr held exposition of the Blessed Sacrament all day long in church on Wednesday, followed by an evening holy hour.

The parish community traditionally honors its patron saint on his feast day in various ways. This year the celebration included a novena beginning Monday, Dec. 27, the feast of St. John the Evangelist, and continuing through Jan. 4, the feast of St. Elizabeth Ann Seton.

“It is always a reminder of who our patron saint is, whose life can still inspire us over 100 years later,” said Msgr. Michael Matz, pastor. “It’s important to connect to him and the life he lived.”

Prayer books were available in the church and the online bulletin provided a link so that people could participate from home as well. During the pandemic, virtual worship has become a regular part of some parishioners’ religious practice.

After weekday Mass on Wednesday, Jan. 5 the Eucharist was exposed in a monstrance on the altar for the remainder of the day as folks prayed during visits. Half of a dozen people signed up for one or more of the half-hour slots from 8:30 a.m. until 6 p.m., while others came at their own convenience. 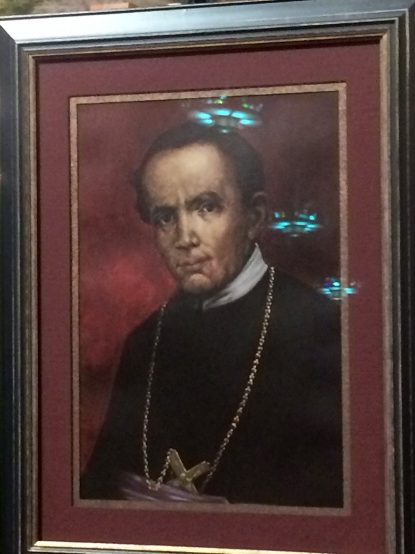 A portrait of St. John Neumann is displayed in his namesake church in Bryn Mawr.

St. John Neumann Parish offered eucharistic adoration every Tuesday during Advent, during which some parishioners were present in the church throughout the day and evening.

“We’re moving along really well in terms of having people come to exposition,” said Frissora.

Among those who came to church on their parish’s feast day, some did so on their lunch hour as a humble way to take a break from the daily routine.

Each grade from SS. Colman-John Neumann Catholic School spent some time in prayer with the Lord. In addition to the feast itself, people were drawn to church for various reasons.

“I’m coming to pray for my girlfriend who is sick and also for the feast of John Neumann,” said Ramona Diano, a parishioner.

Another parishioner who did not give her name had come several times during Advent preparing for Christ’s birth. She always enjoys praying during exposition regardless of the day or season. 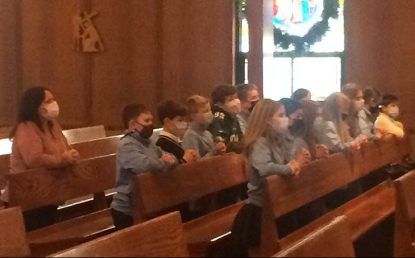 Sixth-grade students of SS. Colman-John Neumann Catholic School spend some time in prayer with the Lord during adoration of the Blessed Sacrament Jan. 5 at St. John Neumann Church.

John McLaughlin of St. John Neumann shared how this great saint truly shaped the Archdiocese of Philadelphia. Schools, hospitals and orphanages were all founded during his tenure as bishop between 1852 and 1860.

“It was nothing less than remarkable under his stewardship,” said McLaughlin.

A holy hour from 6-7 p.m. complete with readings and music marked the last time for the parish to communally honor St. John Neumann on his feast day this year. The liturgy was also livestreamed for those unable to make it to church in person.

“It’s a great way to recollect,” said Frissora. “It helps people to understand who this wonderful man was. He’s an amazing person.” 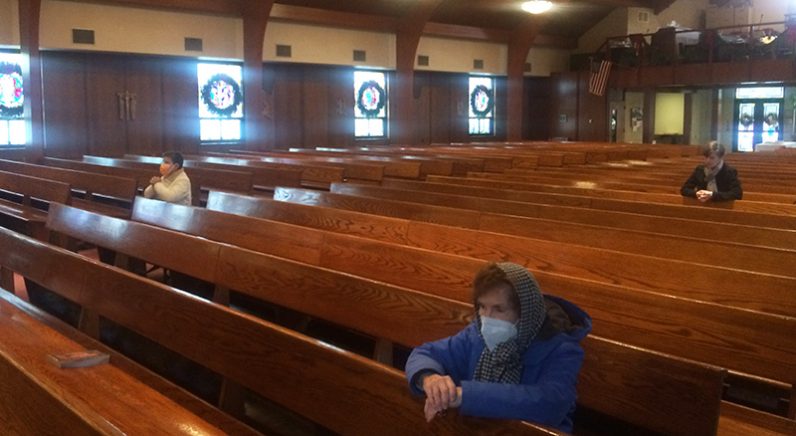 Visitors to St. John Neumann Church in Bryn Mawr take time for midday prayer on the Jan. 5 feast day of the saintly fourth bishop of Philadelphia.

PREVIOUS: Parish magazine spreads the Gospel, one personal story at a time