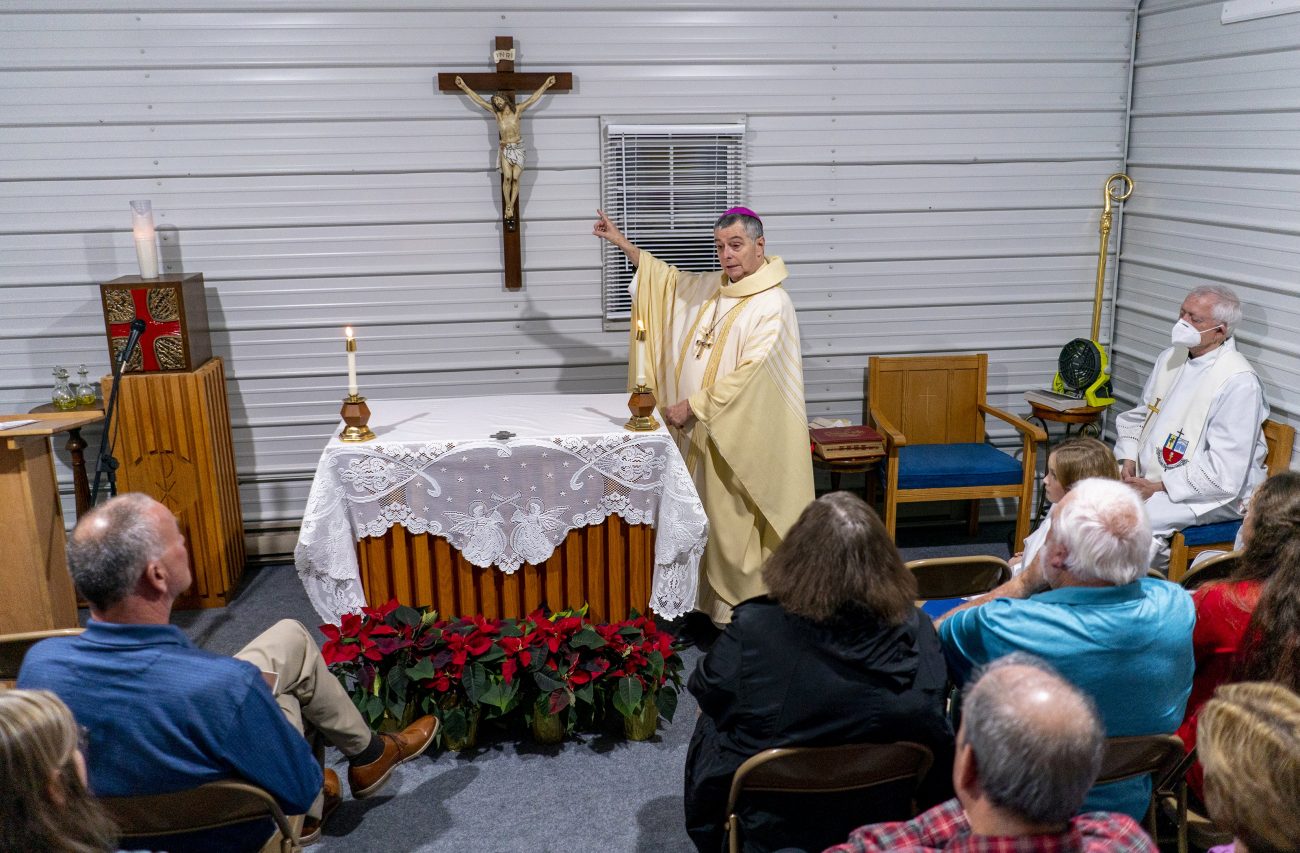 OWENSBORO, Ky. (CNS) — Celebrating Mass in a 20-by-25-foot metal outbuilding on Dec. 24, 2021, for the displaced community of Resurrection Parish in Dawson Springs, the image that came to mind for Owensboro Bishop William F. Medley was “there was no room at the inn.”

But parishioners did find room in a structure shared by a couple in the parish for Christmas Eve and Masses in the new year as well.

“I felt the gratitude that the congregation could be together again — but that they were still stunned,” Bishop Medley told The Western Kentucky Catholic, diocesan newspaper of Owensboro, of the Christmas Eve Mass.

The bishop had driven the 90 minutes to Dawson Springs from Owensboro that day, wanting to open the Christmas season with the Resurrection community.

Resurrection Church was among the buildings lost to the historic tornadoes that hit western Kentucky during the night of Dec. 10, 2021. The strong winds had torn out windows and ripped off parts of the roof, exposing the interior of the little church to the elements.

In the following days, parishioners Donnie and Rhonda Mills offered the use of their outbuilding, which is used primarily as an exercise room, as a substitute church for the time being.

The parish gathered for Mass for the first time since the tornadoes on Sunday, Dec. 19. Their second gathering was that Christmas Eve.

“Their doors have always been open to everybody,” said Deacon Mike Marsili, who with pastor, Father David Kennedy, serves Resurrection and also its sister parishes of Holy Cross in Providence and Immaculate Conception in Earlington.

Deacon Marsili said that over the years, the metal building has seen poker games, barbecues, post-volleyball dinners and weightlifting. Now, it would see the celebration of the Eucharist.

The deacon, whose children grew up alongside the Mills’ children, said it is a Mills family tradition to welcome everyone, Catholics and Protestants alike, for community.

“Donnie’s dad always barbecued or did fish fries on the weekends and Donnie has continued that,” the deacon said.

And so, on Christmas Eve 2021, the people of Resurrection Parish came together to celebrate their resilient community and their faith. Approximately 45 people filled the space snugly, but the weather was mild and several people stood outside the doorway.

The bishop became “really choked up when he talked about seeing the damages,” said Deacon Marsili.

Two weeks before that Mass, Bishop Medley spent a day driving 400 miles across western Kentucky to visit the impacted communities. And just one week earlier, he had flown in an airplane over the tornadoes’ paths with a monstrance containing the Blessed Sacrament, blessing all those below.

“I’ve had several parishioners come up to me and say they had never seen the bishop like that before, and that it meant a lot to them,” the deacon said. He added that “it was more than the fact that he got emotional; it was that he was really, really compassionate.”

Deacon Marsili said that other than his ordination to the permanent diaconate in 2017, this was the most meaningful liturgy he has ever participated in.

At the end of Mass, the bishop offered a few words to the congregation, telling them the cross is not the end of the story, the resurrection is. “Your church is named for that and your church will rise again.”

The deacon said he had wondered if they would rebuild the church, considering that it was small and in a more outlying area: “But when the bishop said that, it sealed the deal. It meant a lot to the parishioners to hear that.”

Since then, the makeshift “church” has hosted Mass every weekend as well as every Thursday morning.

“That was our tradition so we are continuing that,” the deacon said.

Monetary donations may be given digitally here. Checks may be mailed, with “Tornado Disaster Relief” written in the memo, to Catholic Charities, 600 Locust St., Owensboro, KY, 42301.