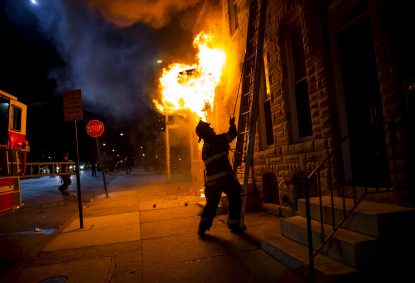 A Baltimore firefighter is seen in this 2015 file photo. (CNS photo/Eric Thayer, Reuters)

BALTIMORE (CNS) — The Archdiocese of Baltimore reached out Jan. 25 to the families of three firefighters killed a day earlier fighting a fire in a vacant home in the city.

Lt. Paul Butrim and firefighters Kelsey Sadler and Kenny Lacayo died after being trapped following the partial collapse of a three-story rowhouse in which they were fighting a fire in the southwest area of the city. A fourth firefighter, John McMaster, remained in the hospital in fair condition.

The archdiocese extended an invitation to the families to use the Cathedral of Mary Our Queen for funerals but has not yet heard if any family has chosen to do so. Arrangements for the funerals have yet to be determined.

“These heroic individuals made the ultimate sacrifice in the service of our city for which we will always honor them,” Baltimore Archbishop William E. Lori said in a Jan. 25 statement.

He said he joined with citizens across the city in paying tribute to the fallen firefighters.

“I cannot imagine the loss that is being felt by the families, friends and colleagues of these brave first responders. I offer to them my most sincere condolences and prayers,” he said. “The path they followed as firefighters was much more than a career; it is a calling they felt to serve their community.”

“We pray for his full recovery and for the health and safety of all of the brave women and men who serve as firefighters and first responders,” he said. “This is a debt of gratitude that we can never repay.”

Several seminarians of the Archdiocese of Baltimore were planning to pray and leave flowers at a local fire station Jan. 29 to pay tribute to the fallen firefighters.

The fire was described as one of the deadliest in Baltimore City, which had not experienced a firefighter’s death in the line of duty in seven years.

Baltimore Mayor Brandon Scott said in a statement: “This is a gut-wrenching tragedy for our city, the Baltimore City Fire Department, and most importantly the families of our firefighters.”

Maryland Gov. Larry Hogan, who ordered the flags in the state to fly at half-staff, said: “Our hearts are broken for the entire Baltimore City Fire Department as three of our bravest have fallen in the line of duty.”

Jackson is on the staff of the Catholic Review, the news outlet of the Archdiocese of Baltimore.

NEXT: All urged to pray, work for ‘a post-Roe America’ that cherishes human life