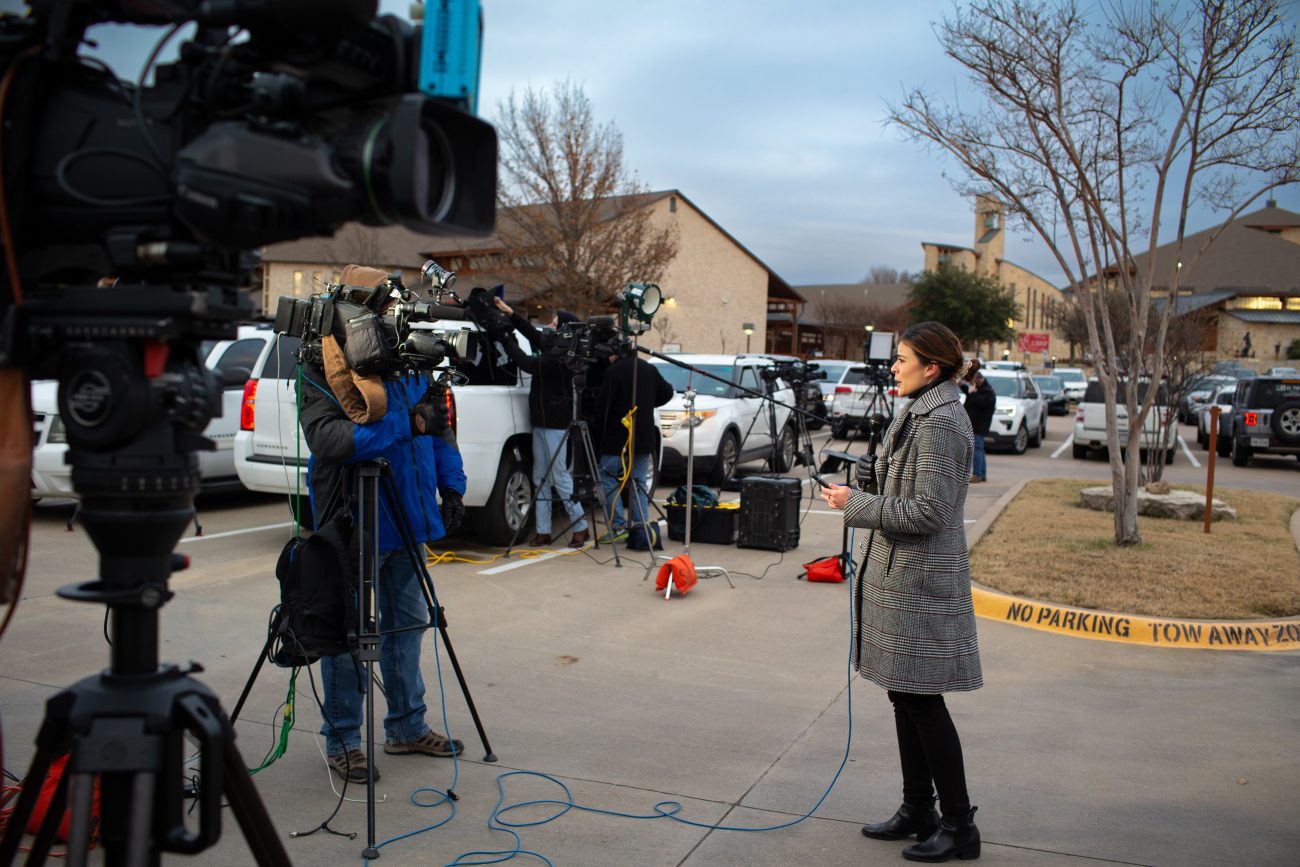 Local and national media, along with police, crowd the parking lot at Good Shepherd Catholic Church in Colleyville, Texas, Jan. 15, 2022, after four hostages were taken during services at nearby Congregation Beth Israel. After about an 11-hour standoff with an FBI crisis response team on the scene, the incident at the synagogue ended with the hostages' release and the hostage-taker being fatally shot. (CNS photo/Kevin Bartram, North Texas Catholic Magazine)

COLLEYVILLE, Texas (CNS) — As the tense hours of a Jan. 15 hostage standoff situation unfolded at Congregation Beth Israel in Colleyville in the Dallas-Fort Worth metro area, so too did a manifestation of faith and community at nearby Good Shepherd Church, according to Franciscan Father Zachary Burns.

“Just seeing not only the Good Shepherd community but people from other faiths and the community in general coming together to help one another was so unbelievable,” the parish’s parochial vicar told North Texas Catholic, the news outlet of the Fort Worth Diocese.

All four were eventually released unharmed though Akram was killed in the incident.

Officials from numerous law enforcement agencies and media outlets made use of Good Shepherd’s parking lot and facilities during the standoff.

“We were able to open the parish hall for them and congregants from Congregation Beth Israel so they could get out of the cold, warm up and get coffee,” said Mike Short, the diocese’s director of security.

“We had a great response from (Guardian ministers) from throughout the diocese who provided security and help throughout the day,” Short said. “It was amazing — the support from staff, parishioners, other faith leaders and members, and the community just pulling together to do everything they could to help.”

The diocese’s Guardian Ministry is a community-led safety and security volunteer ministry that provides parishes with a peaceful and safe place to worship.

Members of Christian, Jewish and Islamic faith backgrounds and a representative from the city attended a prayer vigil in Good Shepherd’s chapel.

“It was a late development deal that lasted about 45 minutes,” Father Burns said. “Just a chance for anyone to get up and offer a prayer or reflection, just people trying to support each other.”

Food prepared for a marriage ministry event scheduled that night that was canceled was donated to feed those on hand. Parishioners and others arrived throughout the day with food and offers to help.

“We actually got more requests to help than we could take,” Short said.

Father Burns, who came to the parish about two years ago from “up north” joked that he was told beforehand that people in Texas, Catholic and otherwise, tend to live out their faith in everyday life.

“Thanks be to God for their safety,” Bishop Olson tweeted after the hostages’ safe release.

Father Burns noted that Rabbi Cytron-Walker, a proponent of interfaith dialogue, has long been a friend of Good Shepherd.

“My whole time here has been under the pandemic, so I haven’t had a chance to meet with many area leaders of other faiths,” Father Burns said.

He noted that he and Good Shepherd’s pastor, Franciscan Father Michael Higgins, “had lunch with Rabbi Charlie recently and it’s ironic that yesterday I saw maybe the largest interfaith gathering I’ve ever seen out of what was a very hectic and tragic day.”

In an interview with Channel 8, the local ABC-TV affiliate, Father Higgins said: “When our brothers and sisters in the Jewish community were suffering, we suffered with them. It was terrible that they had to go through this. This was a frightening experience for the family.”

When the standoff ended, he added, there were “cheers and hugging and praying together” among family members and others in the parish hall. It was “really powerful,” the priest said. 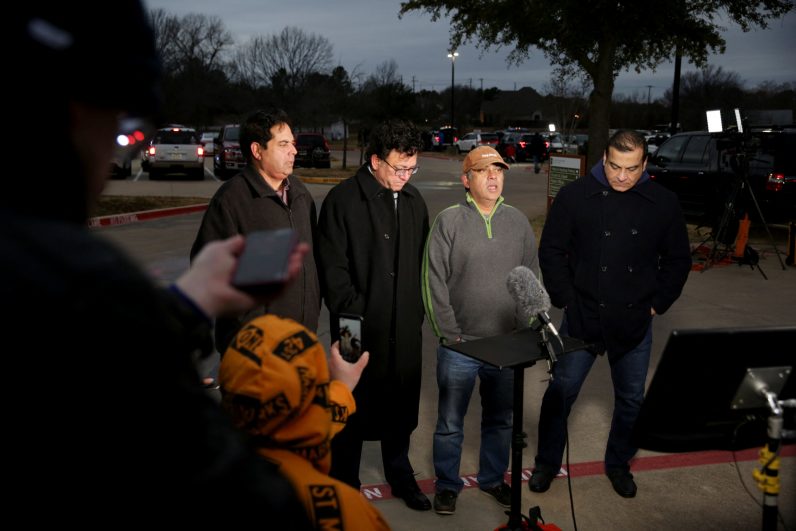 Members of an Islamic center in Colleyville, Texas, in the DallasFort Worth metro area are interviewed by the media Jan. 15, 2022, about a hostage situation at Congregation Beth Israel in Colleyville. FBI crisis negotiators were called in to help resolve what turned into about an 11-hour standoff at the synagogue, which ended when all four hostages, including the rabbi, were released. The hostage-taker was shot dead by police. (CNS photo/Shelby Tauber, Reuters)